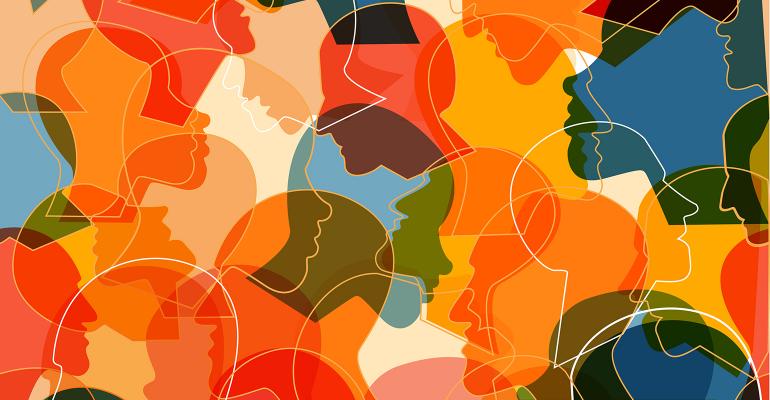 Embrace difference as an opportunity and invitation to learn, grow and develop.

How well do you know your colleagues, especially those whom you ostensibly serve and lead? My surmise is that you know them reasonably well but not deeply so, at least in most cases, which I’ll suggest represents an opportunity for you, for them and for your firm.

As is clear from the unprecedented level of societal upheaval that we’ve been experiencing lately, we’re not very good (yet) at relating to others who’re different than us. And when a challenge presents itself, this gap become more pronounced and costly. Which is why it’s become clear that we need to learn to “Dialogue Across Difference” in order to address the common problems we face and to learn to collaborate to take full advantage of our shared opportunities as well.

Related: Beyond the Superficial to the Substantive

Which is a challenge, to be sure: First, change is hard, and especially so in a dominant, established order that, on the whole, is quite successful. Second, generally speaking, our skills and expertise to address this challenge are largely underdeveloped or lacking. And third, even those inclined to engage are concerned about making mistakes and getting it wrong.

The funny thing is that I suspect that most of you who’re reading are thinking that I’m talking about the specific domain of Diversity & Inclusion. I’m not, actually. I’m really referring to something much broader: the reality that, despite whatever we might have in common, to a person, we’re unique individuals and, as such, deserve to be fully appreciated in all of our idiosyncratic breadth and depth. As a college friend of mine put it recently when sharing a humorous social media meme whose serious subtext was quite clear, we all deserve to be seen. But are we?

For those of us who’re executives, let’s be honest: it’s a lot easier if we don’t get to know our people too well, other than at the minimum level we need to coexist synergistically in a business context. As long as we can collaborate in a productive way, we’re good. But if we have to deal with the totality of who you really are, it can get messy, and occasionally uncomfortably so. I suspect that this is why so many organizations develop cultures of quiet pretense. It’s just easier this way.…

But this covering has a cost: we don’t even have to know the voluminous research to understand intuitively that any amount of energy that we expend just to fit into a culture is decreases what we can invest in contributing to its success. Truth be told, though we may have differing levels of thereof, all of us have a finite amount of energy, attention and effort. The real question, and challenge, is how much of these precious resources can be directed at the work at hand versus navigating the environment in which that work occurs.

Yet if we’re to summon everyone’s full allotment of energy, attention and effort, we need to create environments that reduce, and preferably eliminate, our need to cover so that we can be who we are and be fully accepted for this while being encouraged to maximize our contributions in our own unique ways. In other words, if we’re going to achieve peak organizational performance driven by our people’s consistent contribution of their discretionary best efforts because they feel included, valued and well-treated in the environment, we’re going to have to deal with their innate, and likely messy, idiosyncrasy. And, yes, in this context, I do mean Diversity, at its most broadly conceived, of course.

Which means that were going to have to learn to Dialogue Across Difference: in order for us to get to know each other well enough so that we can identify the unique contributions that we’re each able to make to our collective effort, we’re going to have to be able to interact and converse with each other in ways that are both safe and effective.

Accordingly, a helpful skill not only in staving off potential environmental eruptions but, more importantly, in cultivating a welcoming and conducive organizational culture, is the ability to Dialogue Across Difference, to be able to relate to people in all of their glorious idiosyncrasy. I find that a crucial and initial component of this constructive capacity involves an enabling paradigm shift: while often our natural reaction to Difference is to be afraid and/or avoid it, if we see it instead as an opportunity for learning, growth and development, we’ll be drawn to it, seeking to explore the myriad possibilities that it offers.

For example, for many if not most people, in getting to know a colleague with whom you don’t think that you have much in common, you tend to assume that you can’t or won’t have a particularly strong or meaningful relationship. Alternatively, if you approach such a situation with a ‘exploration and celebration’ mindset, you’ll realize that the two of you have an awful lot that you can teach each other … and often this continuing dialogue leads to the discovery that you do, in fact, I have more in common than you may’ve realized initially. You’re also likely to find that you have myriad aspects of personality, expertise and skills that you may not share initially but can offer one another in a mutually beneficial way over time.

This was brought to mind for me recently when a professional acquaintance read an article that I had written that contained a reference to a musician of whom I was a devoted fan in my youth. He had no idea who this performer was, but then went on to reveal his own allegiance to a band with which I wasn’t familiar. In the ensuing conversation about why we were so enthralled with our respective – and contrasting – musical pursuits, we had a great time riffing with each other, learning from each other and enjoying each other’s company in a way that hadn’t happened in any of the previous handful of conversations that we’d had over the years. So, it turns out, our willingness to Dialogue Across Difference actually created an opportunity for us to strengthen our relationship as well as developed a bridge for us to dialogue more broadly and thus collaborate more synergistically in the future.

Don’t get me wrong, soon thereafter, I sampled the music of that band with which my acquaintance was so enamored. To put it kindly, I’m not really a fan. But in a sense I am: because I now appreciate how much their music is savored by someone with whom I have a relationship that I value, while it may not be my cup of tea, I’m glad that it contains such meaning for him.

This is a key insight associated with our ability to Dialogue Across Difference: through our relationships with others, we can learn ever more about our world by proxy, which enables us to make more fully informed decisions both personally and professionally, even though we may differ as to the meaning and import of our respective experiences and bodies of knowledge. Simply put, I can learn from your Difference and be better off because of it, even if I don’t share it.

And, sure, sometimes what we’ll learn will be challenging, but the reality is that, as with everything else of value in our lives, there’s invariably some cost associated with it. Given the required reciprocity in any healthy relationship, there’re bound to be aspects of others’ personalities, worldviews and behaviors to which we’re not naturally inclined. No, the circles won’t overlap totally on our relational Venn Diagram … but is this something we’d really want? I’ve found that it’s those areas beyond the overlap that can be the most instructive as well as intriguing and fun to explore.

In this spirit, then, I encourage you to embrace difference as an opportunity and invitation to learn, grow and develop, and then to have this stoke your commitment to Dialogue Across Difference continuously. In so doing, I’m confident that you’ll develop deeper, richer relationships with both colleagues and kin, as well as create a broader and more welcoming sense of community both interpersonally and collectively.

In a business context, in addition to being a lot more fun, in my experience, this has been singularly productive as well. And what’s better than winning with colleagues and friends whom you admire while enjoying the journey immensely? This is what Dialoguing Across Difference is really all about. ...