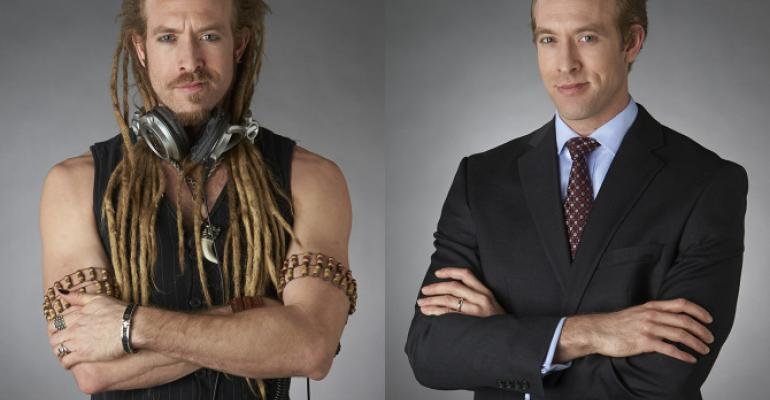 Is the CFP Board Losing Credibility in the Eyes of Advisors?

A WealthManagement.com survey shows one-third of advisors believe the recent scandals plaguing the board have hurt the value of the designation, while over half don’t trust the compensation disclosures on the firm’s website.

WealthManagement.com surveyed 321 CFP holders and found that one-third believe the recent scandals detract from the perceived value of the designation. Fifty-four percent said they don’t trust the advisor compensation disclosures on the CFP’s website.

“I understand what the CFP Board is trying to do, but the recent issues are disappointing,” said Nathaniel Tilton, owner of Tilton Wealth Management in Waltham, Mass., in the write-in portion of the survey. “The idea should be to simplify the brand, add credibility to the designation, and provide clarity to investors. Unfortunately, it's not playing out that way. The brand is confusing, credibility has been diminished, and investors are no better off as a result.”

The CFP Board has been in the headlines lately for a number of scandals over compensation definitions and disclosures on its website and the doubling of CEO Kevin Keller’s salary from $448,000 in 2009 to $888,000 in 2012 at a time when membership dues are also going up. The board is facing a lawsuit filed by licensees Kim and Jeffrey Camarda.

According to the results of the WealthManagement.com survey, some existing members are questioning whether the designation is still worth the cost.

“For wealth managers, like myself, it appears their actions have had the unintended consequence of having current members reevaluate whether continued membership is a useful tool in a financial planners tool box,” wrote Christian Koch, a CFP, CPWA and independent private wealth advisor with KAM South in Atlanta.

“One question that I can’t answer—and I’ve told lots of people I can’t answer—is why I still have the CFP designation,” said Allan Roth, founder of financial planning firm Wealth Logic in Colorado Springs, Colo. “Why do I keep paying for it if I don’t believe in it?”

The WealthManagement.com online survey went out to a random sampling of 40,000 CFP holders across all advisor channels in early April, yielding 321 total responses. (See chart.)

Among the results: Seven out of ten advisors have not changed their opinion of the CFP, while three percent have a higher opinion and 26 percent have a lower opinion. (The CFP Board disputes the survey’s methodology. A June 2013 CFP Board survey found that 92 percent of CFPs were satisfied with their decision to pursue the designation.) 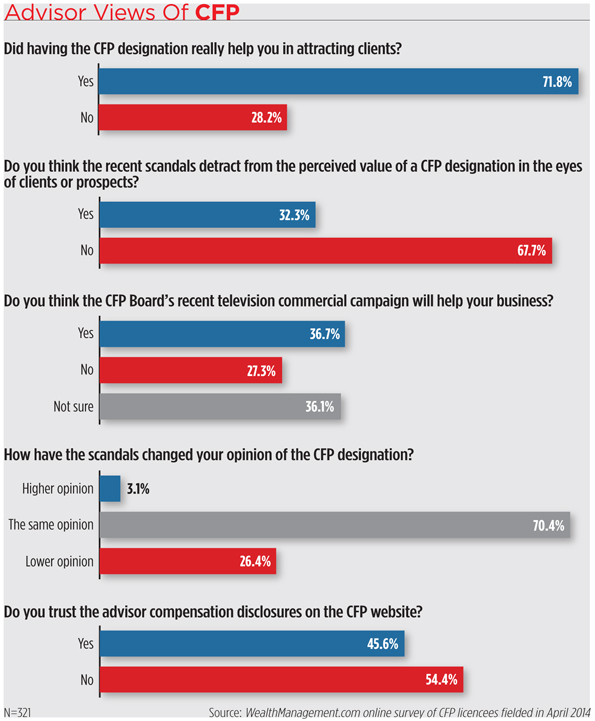 “To a certain extent, we're all in this together,” wrote Ben Simiskey, owner and founder of PLS Advisory in Houston. “That's great when things are good. But when there’s trouble like this, we all suffer. A rising tide lifts all boats. But conversely, a receding tide lowers all boats.”

Deborah Fox, founder of Essential Planning Services and the Fox Financial Planning Network in San Diego, has no plans to get the designation and says she doesn’t want to have anything to do with the organization. Despite her having 29 years experience in financial planning, she believes she’s considered sub-par by the CFP Board because she doesn’t have the designation.

“I’m just disgusted at what has been going on,” Fox said. “‘If you don’t have a CFP, you can’t succeed in the business,’ is basically the type of message being put out there.

“I think the scandals will definitely hurt them, at least over the short term. If they take measures to correct certain ways that they’ll handling situations, then I think they can recover from that.”

Some advisors take issue with the CFP Board’s lack of action on the issues, especially on compensation disclosure.

“The CFP Board continues to insist that all is well and everything is OK and the compensation disclosure rules are clear,” said Michael Kitces, an industry blogger and advisor who holds a CFP. “And certainly it sounds like the implication from the survey is no, there are still certificants who are concerned about this.”

CFP Board Chair Ray Ferrara has stated that the group’s compensation definitions are clear and do not need to be addressed. Under the board’s current definition, an advisor is considered “fee-only” if they are not affiliated with any business that takes commissions, even if the advisor himself never receives a commission.

“It’s like finding everybody on the planet guilty of murder cause you could kill someone tomorrow; that doesn’t actually make you a murderer,” Kitces said. “The fact that you work at a firm with another person that happens to get paid commissions is not proof that you’re getting paid commissions.”

“I think the CFP Board improperly approached the subject of compensation and failed to produce information for clients which was meaningful,” wrote Robert Frey, advisor at Seattle-based Lakeside Advisors.

“The CFP Board is the standard-setting body for the profession, so the onus really falls squarely on their shoulders to have a clear and concise definitions when it comes to compensation,” said Janet Stanzak, current president of the Financial Planning Association. “If the CFP Board is inadequate in fulfilling its goal and meeting its responsibilities, FPA would have no qualms about speaking up on behalf of our CFP professionals, and we’ve done so in the past.”

One gripe among some advisors is the CFP’s television ad campaign, in which a DJ fools a number of clients into believing he’s a financial advisor. “If they’re not a CFP pro, you just don’t know,” the commercial says. “Find a Certified Financial Planner who’s thoroughly vetted at LetsMakeaPlan.org.”

About 37 percent of CFPs believe the recent television campaign will help their business, while 27 percent don’t feel it will help. Thirty-six percent said they weren’t sure.

CFP Tim Welsh, president and CEO of Nexus Strategy, said his yearly fees doubled to help pay for the $40 million campaign. Yet, advisors don’t get a lot of business through the CFP site, he said.

“Despite the fact that they’re running commercials with DJs on Sunday golf hour, people aren’t going there to find a financial advisor,” Welsh said.

Some advisors had their own views on how to fix the problems.

“If they get ahead of the curve and start asking for feedback earlier in the processes, they have a better chance of not rolling something out that gets everyone uptight,” suggests advisor Dan Moisand, who used to serve on the CFP Board of Practice Standards and the Discipline and Ethics Commission.

Marilyn Mohrman-Gillis, managing director of public policy and communications at CFP Board, said the CFP Board has mechanisms in place for seeking input on a regular basis.

“For example, we have regularly scheduled certificant connections, which are town hall-type listening sessions where our CEO and board leaders go around the country and listen to CFP professionals and their opinions on things.”

Advisors need to get more involved, Kitces said.  “As long as we don’t have a clear alternative to stake as the future of the financial planning profession, the solution is not to throw your hands up in the air and say, ‘I’m dumping my CFP designation.’ The solution is to get active and make your voice heard to the board of directors.”

Speaking after a panel at a recent SIFMA conference in New York, Devin DeStefano, managing director at Wells Fargo Advisor's Next Generation Advisor Strategy, suggested the firm was being cautious in embracing the designation for its advisors. Unlike Merrill Lynch, Wells doesn’t have a strategy in place yet to get an advisor with a CFP designation on every team. "We’ve just backed away from it at this point," he said. "I got it ten to eleven years ago. It’s going to make me do a better job. But any time you attach your name to something and it’s not a good example, you worry about that. The missteps, I think inside the organization, and some of the things they’ve  done to designees, isn’t great. But it’s not a witch hunt."