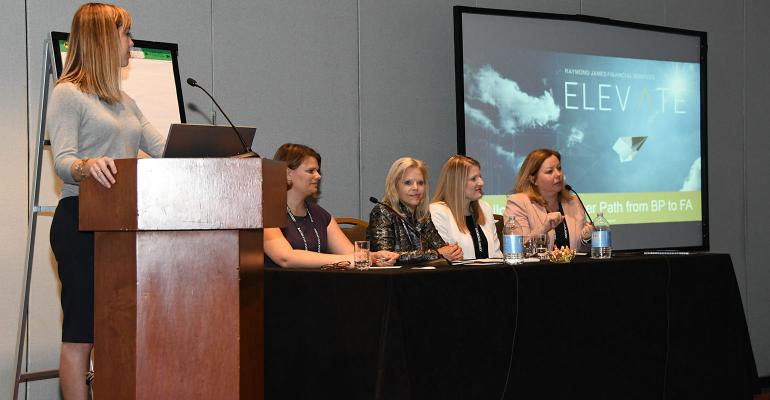 The Career Path from Branch Professional to Advisor

These women transitioned from branch professionals, handling the smallest accounts the lead advisors tossed aside, to full-blown advisors. Here’s how they did it.

Many branch professionals make ideal candidates to become financial advisors. They’re already pretty knowledgeable about the business, they have key contacts with home-office divisions and many have client-facing aspirations. Advisors may even find the successor to their practice in such professionals.

A panel of women FAs spoke about how they made the transition from branch professionals to advisors, during a session at Raymond James Financial Services’ 2017 National Conference for Professional Development in Orlando, Fla. this week.

“It’s hard to be a woman in an old man’s industry,” said Kimberlee Bouska, advisor in Beaverton, Ore.

To overcome that challenge, Bouska realized she’d have to differentiate herself, so she got her CFP designation.

“No one else in my area had that,” she said.

She also used the fact that she was young to sell herself, arguing that she was not set in her ways (as many older advisors are), and that she could bring a fresh perspective to the team.

At the beginning, she got all of the accounts that the lead advisor didn’t want, such as small IRAs and 529 plans. “I became known as the ‘529 plan queen.’”

But those small $500 accounts grew into warm leads and are some of her largest clients now. Bouska would call them in for a comprehensive financial plan and uncover assets that no one noticed before, such as inheritances and stock options.

“You paid attention to them when no one else did,” she said.

When you’re just starting out as an advisor, fear can often set in, said Melissa Joy, an advisor in Southfield, Mich. You should expect rejection. Early on in her career, she would identify the things that scared her the most in a room, such as asking questions, then she would make a concerted effort to do those things.

Sitting in on meetings with the lead advisor can be a great way to learn on the job, but that can also bring fear. Lauren Black, an advisor in Starkville, Miss., would overcome that fear by roleplaying with the branch manager in her office so she was more prepared for meetings.

Joy recommends being an active participant in meetings and scripting it out first with the lead advisor. If there’s a certain area of the meeting you want to lead, such as investments, plan that out, but look for opportunities to chime in as well. That can be a great way to build credibility with clients. Or, offer to do the follow-up from the meeting. That takes something off of someone else’s plate, and gives you a chance to nurture the relationship.

The work-family life balance was another concern brought up by branch professionals looking to become advisors — something rarely discussed in this industry, Joy said. If the economics work in your household, hire help, such as a house cleaner, she added.

Sherri Stephens, a branch manager in Flint, Mich., said she tried delegating tasks to people. She had to let some things go, but always made it to things that were important to her kids. She also found a network of women through her study group that she could talk to about the challenges.

“Sometimes you just need to vent,” she said.