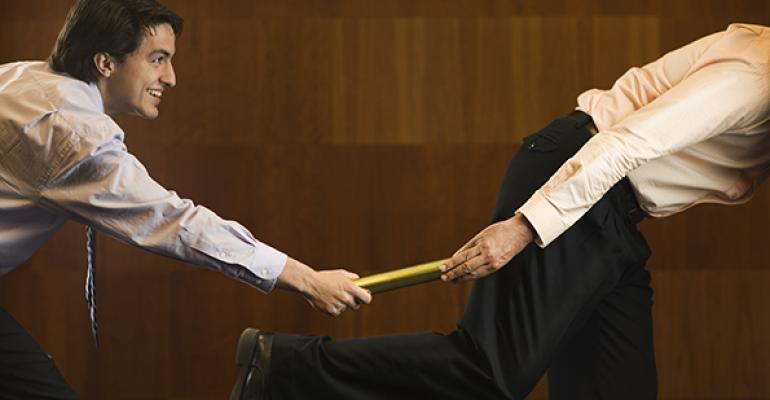 Business Succession From Start to Finish: One Advisor’s Story

Guy Swain was a solo practitioner with a staff of two. He started thinking about a succession plan when his assistant moved out of town and he considered hiring a CFP to replace her

Guy Swain, founder of Raleigh, N.C.-based LifeTime Asset Management, understood the importance of a succession plan but he didn’t develop his own plan until he was in his 50s. The reason: A staffing change provided him with an opening to hire a new advisor he could groom as his successor. “I had no intention of retiring anytime soon, but I wanted someone to take some of the pressure off,” Swain recalls. “I also knew that planning for succession could be quite a process, so I wanted to start earlier rather than later.” As with any plan, Swain says some elements of his succession plan worked out well while others did not.

1. Choose someone who complements your skills.

When he was considering who to hire, Swain figured he should look for someone with a complementary set of skills. “I think a lot of advisors end up looking for someone exactly like them because that’s what they’re comfortable with,” Swain says. “I think that’s a mistake. You want someone who can make up for your weak spots, and vice versa.” Swain asked likely candidates to take the Kolbe skill assessment test. He was impressed with a detail-oriented candidate named Matt who Swain felt would complement his own big-picture approach.

2. Transition slowly and with clear benchmarks.

Despite a positive first impression, Swain didn’t want to rush the process. He sketched out a 10-year plan that would see him retire with Matt buying out the practice. The two had never worked together, however, so Swain felt it was important to set up interim steps along the way. For example, he started by offering Matt a trial position for one year. Next they generated a list of mutually agreed upon performance benchmarks and agreed to review them on a quarterly basis. “It was clear right off the bat that we worked well together, but it was still important to have those periodic check-ins,” Swain says.

Matt is 30 years younger than Swain, and both men worried Swain’s older clients might have a hard time working with someone so young. To deal with any potential issues, Swain slowly introduced Matt to his clients over the course of a year. Clients who called the firm were referred to Matt when Swain wasn’t available, so they could get used to interacting with him. And in the second year, Matt began to sit in on client meetings—eventually leading some of his own after a couple of years. “We both work with clients alone at this point, but sometimes we’ll tag team—I’ll do the investment part and then hand off risk management issues to him,” Swain says.

4. Give your successor equal billing

To ensure Matt felt like an equal partner, Swain made him a principal in the firm after two years. The two also agreed Matt would buy out 50% of the appraised value of the firm over the first five years. The ownership stake had both a practical and a symbolic benefit: “Having both our names on the stationery at the same level created a real sense that this was an ensemble practice,” Swain says.

Lessons to learn from:

While Swain couldn’t be happier with the way his succession plan has been working so far, there were two things he would’ve done differently if he had it all to do over again:

1. Slow down the buyout.

The two advisors laid out a relatively accelerated buyout schedule. As a result, Matt has to make substantial monthly payments. “That puts some strain on him, especially since he’s starting a family,” Swain says. “If I had to do it again, I’d split the buyout into three parts, instead of two.”

A lot of time was spent on the buy-sell agreement, which Swain recognizes was important. But he realizes now that they should have spent more time discussing the daily roles and responsibilities. “It would’ve been helpful if we’d talked about things like vacation time in advance,” Swain says.

Succession planning is a complex process that’s best broken down into smaller steps. Swain is happy with how his plan has worked out and feels on the whole that it has worked for both advisors. “There is no perfect succession plan,” Swain says. “But the more attention you give the process, the better your results will be.”