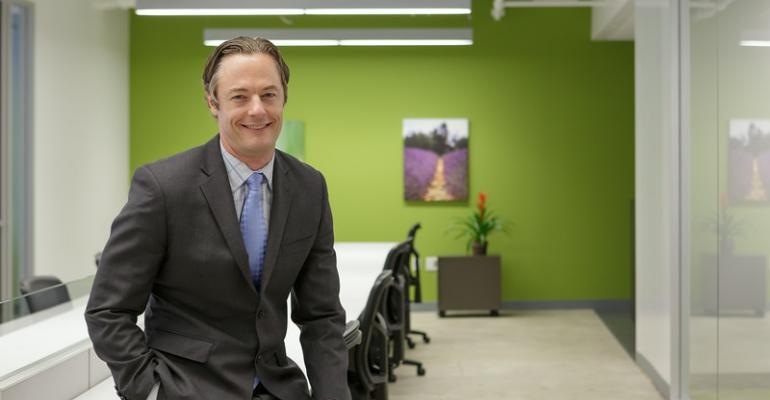 <p class="p1">Chris<b> </b>Battreall, at one of the work desks in Chicago, will manage the new office.</p>
Practice Management>Business Planning

Since its inception in 2005, Newport Beach, Calif.-based United Capital Financial Partners has been in the business of acquiring registered investment advisor firms. But the firm is now taking a different tack to grow, and has built its first office from the ground-up in Chicago, right in the backyard of HighTower Advisors, another prominent RIA acquirer.

Jason Del Col, senior vice president of advisory services at United Capital, said HighTower was not a factor in choosing Chicago as the location of its first office built from scratch.

“HighTower really attracts a different type of advisor from United Capital, so that wasn’t part of the calculus,” he said. “[Chicago] was really, for us, a gateway to the Midwest.”

The new office will be managed by Chris Battreall, a managing director originally based out of United Capital’s Modesto, Calif. location; Battreall has recruited two advisors so far. The office will also include an Honest Conversations Lounge, an airy, bright space with comfortable furniture, computers, tablets and big screens, where advisors can meet with clients. The firm has been testing the Lounge concept at its Dallas hub.

“We believe the next evolution of advisors is going to require much more dynamic space to meet clients in; we want to be able to more rapidly put locations in place,” Del Col said. “And frankly, we now are at a point where we’ve got enough people wanting to join United Capital and not be acquired, that we require that kind of space.

“We don’t want to recreate the old, mature model of how an advisory practice looks locally. We’re completely reinventing it.”

The Chicago office will target new advisors to the industry who want to grow to $200 to $300 million in assets. These FAs will join the firm’s Million Dollar Advisor program, which mentors and manages advisors to get to $1 million in revenue.

Advisors will be able to plug into the lounge and meet with clients, without having to worry about building out a staff or an office. The office will be supported by a four-person team at the Dallas hub, who will provide compliance, client and prospect tracking, fee billing and marketing. Advisors will attend the firm’s bootcamp in Dallas, where they’ll get trained on the client experience.

United Capital is not getting out of the business of acquisitions. In fact, the firm just recently hired Ryan Marcus, who previously lead business development for RBC Advisor Services, the firm’s RIA custody unit. As director of new partnerships, Marcus will be responsible for executing on United Capital’s acquisitions strategy, and also develop new strategies for acquisition.

United Capital was founded by Joe Duran, who we profiled in the April issue of REP. The firm has grown tenfold since its inception and is one of the more unique financial planning retail-facing RIAs in the country. Duran aims to double revenue by 2017, and to do so by appealing less to portfolio performance and more to helping clients navigate all points where their lives and their money intersect. His advisors use an orderly and thorough process of carefully crafted questions and conversation starters, created by Duran and designed to uncover clients’ sometimes unspoken motivations, values and goals. More so than other RIAs that talk about “holistic” planning, Duran’s advisors are counselors and therapists as much as they are financial managers.