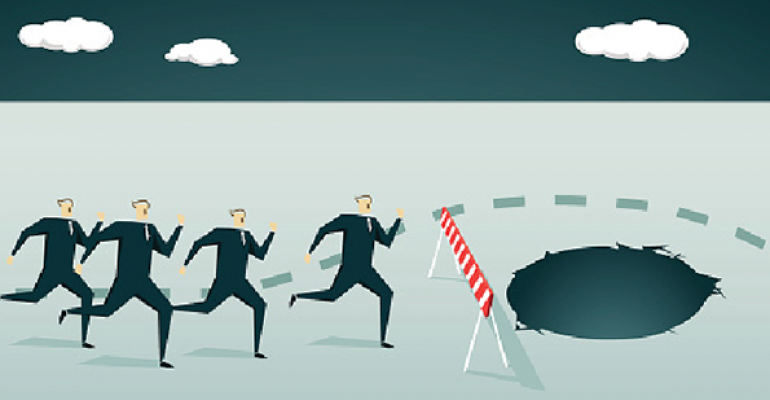 Stumbling Towards a Team

Ensemble-based practices perform better, but there are pitfalls along the way; here&rsquo;s how to avoid some common ones.&nbsp;

Back in 2000, when Todd Sanford launched his solo firm, Sanford Financial Services, he knew he wanted eventually turn it into a team-based practice. He studied everything he needed to know to build a team and now, with 14 employees, including himself and two other partners, he’s reached $600 million in assets. “I’ve spent a lot of time on this—and it seems to be working,” says Sanford, who has mentored several dozen advisors interested in ensembles at his broker-dealer, Raymond James.

There were some stumbling blocks. In 2007, he agreed to cosign a partner’s bank note, even though the partner stipulated an aggressive seven-year repayment plan. When assets and revenue took a nosedive in 2008 and 2009, the firm still had to keep forking over whatever the partner needed to make his payment. “We got through it,” says Sanford.

Team-based practices, where accounts are treated as clients of a multiprofessional firm, make more money than solo shops. So it’s not surprising many advisors want to adopt the model. But learning to work as a team involves significant hurdles, says Matt Lynch, managing partner of Strategy & Resources in Dayton, Ohio. Some of those hurdles can be deal-killers without highly creative approaches. Here’s a look at a few challenges:

Generally, ensembles give everyone a salary, a bonus and, for those with an equity stake, a distribution. That ends up being unpleasant for some advisors used to “eating what they kill.” In that system, if one advisor took a few weeks off and didn’t do much, it only impacted that person’s income, says Marty Miller, who heads coaching firm Clear Path Consulting. “But now, you have to carry your weight all the time.” Some advisors simply don’t like sharing the pot.

Miller points to three advisors in Indiana who had worked together for many years, sharing the same business entity and rent, but splitting revenues mostly according to what they brought in. Last November, with great enthusiasm they decided to form an ensemble and share revenues. While two of them did just fine with that system, the third, a 58-year-old veteran, found the new arrangement to be a significant disincentive. “He needed that payday,” she says.

After about two months of working with the partners, Miller came to the realization the arrangement wasn’t going to work. She suggested a hybrid: They would continue marketing their services under the same name and sharing a web site and office space. But the two more gung-ho partners would share revenues and voting rights, while the other would operate on his own. New advisors who came along would sign on with the ensemble. So far, according to Miller, the arrangement seems to be working.

Moving to new compensation arrangements can be a difficult transition and consume a lot of time. The shareholders of Quest Capital Management in Dallas went to the ensemble model in 2000 and put everyone on a salary and bonus, only to change the compensation structure again the following year, and the year after that. “There was a lot of angst,” says Kalita Blessing, who started out as an intern in 1993 and became a shareholder seven years later. After five years the shareholders hired a full-time COO to get the process under control. “It took us until 2008 to turn the corner on that, and then we went through a couple of years of low profits.” Now things are finally running smoothly at the $1.1 billion firm, says Blessing.

Like any business, an ensemble requires that everyone follow the same procedures, from ordering supplies to creating investment performance reports. But that can be a problem for firms with advisors used to doing things at the last minute and in their own way. Miller points to a three-year-old Northern California firm with two offices and four advisors as an example. In one office there was an industry veteran who seemed incapable of following standardized procedures, often sending incomplete or incorrectly filled-out documents to administrative staff in the other office. The advisor’s executive assistant was recruited to act as the middleman, getting the needed information from the advisor and putting it into the standardized paperwork.

Managing professionals is a skill set often no less difficult than dealing with clients, says Brandon Odell, a partner with The Ensemble Practice, a Seattle consulting firm that specializes in working with financial advisors. “You need to be willing to attract them and learn how to retain them.” He points to the owner of a Texas firm who brought on board a less-experienced advisor, with the intention of perhaps turning over the practice to him in the future. But he was unwilling to spend the time to provide any guidance. The older man “just turned the new advisor loose, with the expectation he would help generate revenue,” says Odell. Ultimately, the junior advisor left to join a bigger operation with a more structured training process.

Mark Chamberlain, CEO of Lakeside Wealth Management, and his three partners, on the other hand, addressed that issue soon after they turned their then nine-year-old Chesterton, Ind., firm into an ensemble in 2012. Junior advisors start on a clear path of increasing client engagement. They first sit in on client meetings; eventually, they participate and then help lead the sessions. When Chamberlain thinks they’re ready, he’ll spend only about 10 minutes in the meeting before handing it over to the junior advisor and leaving the room. According to Chamberlain, the firm has doubled assets to just under $1 billion since becoming an ensemble.

At Quest Capital Management, the firm takes that one step further, holding SWOT (strength, weaknesses, opportunities and threats) analysis discussions with employees every 90 days, along with an annual performance review that ties compensation to reaching certain objectives.

Being on the same page about the brand

In a successful team-based practice, everyone is part of a unified brand—and everyone has to stay on message. That’s fine when there’s agreement, but a challenge when there isn’t.

Miller points to that three-partner Indiana firm as an example. While all the advisors were involved in their Christian faith, one wanted to be aggressive about publicly asserting it and put Bible quotes on their website, among other things. The others were afraid they’d alienate some potential clients.

They worked through the conflict and came up with a compromise, but “it didn’t make anyone happy,” Miller said.

Building a team-based practice invariably involves many such compromises, both large and small; advisors committed to the path need to expect some disappointments and exercise a good deal of personal flexibility. Like any goal or relationship worth pursuing, the pain of the immediate compromise fades in favor of the long-term benefits.