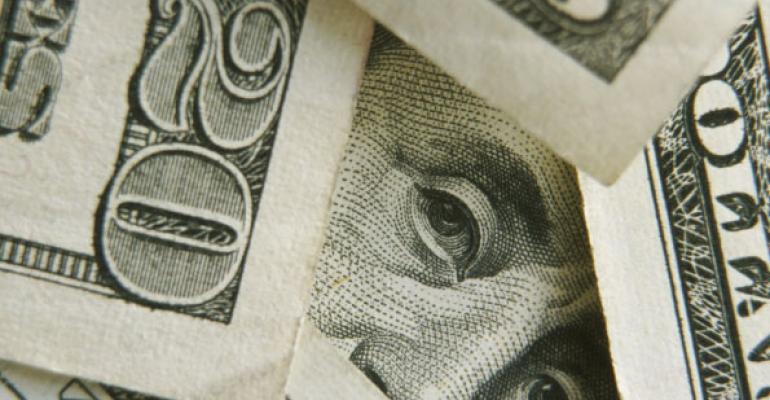 “What this also tells you in big, bold colors is that advisory businesses do not scale. If you bring more volume to the pipe, theoretically, your average cost per client should go down. But what we’re seeing here is it going up.”

Last year was a relatively good year for the markets; the S&P 500 was up 16 percent.

Yet profit margins at registered investment advisor firms continue to fall, according to WealthManagement.com’s 2013 AdvisorBenchmarking RIA Trend Report, from 37 percent in 2010 to 26 percent in 2012. Part of the reason is that expenses at the firms also rose, pretty dramatically, from a median of $100,000 in 2010 to $231,000 in 2012, with management compensation making up much of that increase. Advisors aren't reigning in their trajectory of increased costs even though the market recovery has begun to level off, and much of the increased costs, the report finds, are going to compensate managers.

The AdvisorBenchmarking RIA Trend Report was based on an online survey of 381 RIAs conducted between June and July 2013. Advisor practices did grow in line with the market, with median AUM climbing 16 percent, to $71 million. Median revenues, however, did not grow as rapidly, reaching $485,000, a 9 percent boost over 2011.

Some say RIAs could just be riding the markets, but not doing much to change the infrastructure of their firm or operate more efficiently, said Kim Dellarocca, head of practice management and director of segment marketing at Pershing. That kind of spending can be masked when markets are rising by mid-double digits, but as the market's growth moderates, profits will suffer.

“[Healthy firms] should look at things like the lift from the market as an added bonus, sort of like a tailwind that propels you, but not where you’re getting your main source of fuel,” Dellarocca said.

“It’s also known as the hidden subsidy that, ‘Yeah, I’m doing great. Look, we made more money last year,’” said Tim Welsh, president and CEO of Nexus Strategy in Larkspur, Calif. “But, ‘What did you do differently?’ ‘Well, nothing. But the S&P did some work for us, so that was really cool.’”

If firms had today's profit margins in 2008, when the markets were down 40 percent, they’d be under water, Welsh said. In that scenario, advisors would just stop paying themselves.

A much healthier profit margin is around 30 to 35 percent, said John Furey, principal of Advisor Growth Strategies and the founder of aRIA. But aRIA’s members see profit margins of 40 percent or higher. Carson Wealth Management, for example, runs a profit margin of around 41 percent.

Investing in the Business

Ron Carson, founder of Carson Wealth Management, believes that the overall margin compression among RIAs could be a sign of the success of online advice platforms. “We’ve always taken great comfort in, ‘People always want to work with a human,’ but this thing is alarming because you see how quickly margins have fallen,” he said. “You have to keep the client experience front-and-center, and if you don’t, then I think we’re going to lose a lot of relationships."

Furey said the margin compression could also be a matter of advisors being more positive about the future and investing a lot back into their businesses, which the numbers support. ARIA firms are more focused on how to get operating leverage now, so the next revenue dollar is more profitable than the existing one, he said.

According to the survey, advisors did spend a bit more on technology, training, licensing and education. (See chart, below.) But the category that saw the biggest increase in share of expenses was management compensation. 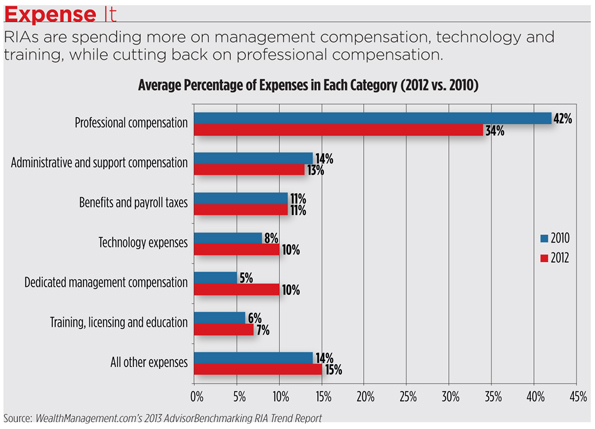 Mark Tibergien, CEO and managing director at Pershing Advisor Solutions, said many RIAs likely deferred investment in their businesses in 2010, at a time when assets and revenue were growing. Now, they’re reinvesting back into the business, particularly as it relates to people.

For the average firm filling out the survey—with $71 million in assets, the $200,000 in expenses would be a big bite, Tibergien said. “But some of these firms are taking bigger risks now because they’re saying, ‘If we don’t create the capacity to grow, then we’re not going to.’”

But Welsh believes that advisors are not investing enough in technology. Ten percent tech spend is still low, he said. Carson, on the other hand, said his firm will spend close to 20 percent on technology this year.

“Advisors are very much in the manual business, very paper-based,” Welsh said. “They’re probably still mailing out quarterly reports, when they could put them on the website. They’re not embracing technology because life is good.”

“What this also tells you in big, bold colors is that advisory businesses do not scale. If you bring more volume to the pipe, theoretically, your average cost per client should go down. But what we’re seeing here is it going up.”

“You would expect that as revenues grow, as they can spread costs over a large number of end clients, they would see their overheads as a percentage of revenue decrease, but a lot of firms aren’t seeing that happening,” said Jim Dario, managing director of product management for TD Ameritrade Institutional.

Dario said firms need to become more systematized, starting with the back-office operations. For example, having a CRM package combined with forms filling, document management and online signature capabilities can significantly reduce the amount of time it takes to open a new account.

While some are worried about the pressures on profits and the need for better technology, Tibergien has a much different outlook on the RIA market:

“What happened in 2010 was an anomaly, and what you’re experiencing in the last survey is reality. In fact, it’s reality at its best. What I think you’re observing most from your survey is that the advisory business is back to health, that advisor firms are showing consistent profitability; they have a new attitude about investing more in their business, and that clearly it’s a growing segment of the retail population.”