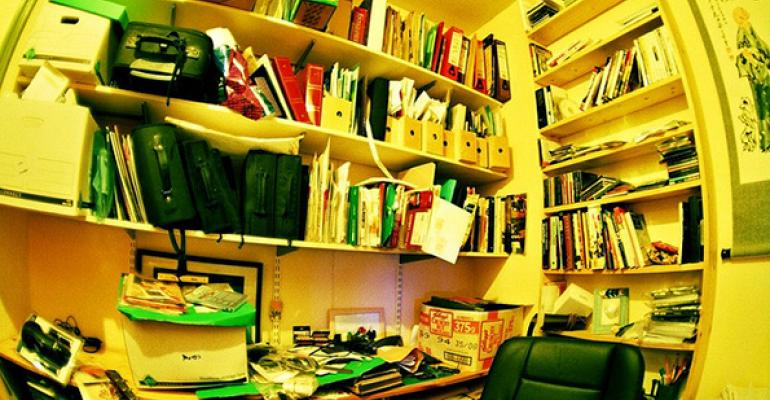 Feeling bogged down at the office? Here are tips from advisors who are keeping their practices light and mobile—using everyday apps and consumer tech tools

As a financial advisor, Sophia Bera should consider a financial planning software program a vital part of her tool kit. Certainly dozens of vendors have tried to sell her on one over the years. But she doesn't use one. Instead, the Minneapolis-based CFP uses an Excel file built by her friend—presenting clients with a Word document to give them a sense of their progress.

Dodging the four-figure price tag that most financial planning programs cost, Bera instead spends just $100 a month on all the technology she needs for her year-old practice—using free or low-cost apps, cloud-based services or just creative uses of everyday software.  While she attributes some of this to the fact her Gen Y clients are digital natives and work in an efficient way — she says that today, it’s far easier to work with less.

“I literally run my business from my laptop,” she says. “I have a laptop bag with my computer, phone and a power cord. That’s my office. It’s just so streamlined.”

Bera’s hardly the anomaly. Advisors are simplifying how they run their business—and lowering costs—using stripped down versions of costly applications, mobile devices, apps and the cloud. They are giving up nothing except heavy price tags and cluttered workspaces, they say.

Despite her bare bones underpinnings, Bera has a robust practice, she says. She doesn’t have a fax machine. And while she admits she doesn’t do complex retirement projections and Social Security estimations for her clients, that’s because it’s less applicable to the 20-something and 30-something investors she focuses on.

So when she sends files for esignatures, or chats with clients in the evening on the free Google Hangouts, or pushes her newsletter over MailChimp, or has monthly invoices paid over PayPal, her clients are as comfortable as she is.

She finds she gravitates as well to well-designed apps seemingly built with her and her clients in mind. Take customer relationship software, another advisor standby. Bera finds them a beast. Instead she uses a program called, literally, Less Annoying CRM, which charges users $10 a month; that’s over 80 percent cheaper than Junxure, which many advisors use. Sure it lacks many fields and features, but all all Bera says she needs is a program where she can access core information for clients, jot down notes, and sync her emails. The fact that it is not designed for advisors is, in her opinion, a plus.

“It’s like the Apple of CRMs,” she says of the look of the program. “It’s clean and it does just those ten things I want it to do.”

The only difficulty for Bera is when she is forced to work at the level of financial service companies that are, to her, still in the stone age. For instance, she has to print documents and pen her name on them to send to her custodian ScottTrade.

And don’t get her started on FINRA. “For me to change my email address with FINRA, they want to me to fill out a form and fax it to them,” she says. “Faxes are the least secure way to send something. That drives me bonkers.”

Even big firms are pushing their reps to adopt scaled-down apps. At Raymond James, advisors are turning to tablets — predominantly iPads, says Josh Bohlander, vice president of technology. Laptops are still favorites, but the key is that the firm’s independent reps are moving away from being encumbered with full desktops and staid software solutions, he said.

Bohlander and others encourage reps to use more mobile-based tools, including apps like Evernote, priced at $45 for the premium service. Reps use Evernote to take a picture, embed a note and send to clients to create a personal touch. Reps are also using Idea Flight, which allows them to run remote presentations over iPads using Bluetooth connections—and it’s free.

There is an added benefit to convenience, says Bohlander. “It can add a wow factor.”

Alan Moore made it his goal to launch his practice with as little encumbering technology as possible. He stripped down his necessities to only the technology that he needs—not what he thinks he needs. That means a lot of testing, trials and sometimes starting over.

Moore changed from his old scheduling assistance program because it didn’t take into consideration time zones. Now he used ScheduleOnce, priced at $49 a month. Instead of sending emails (or worse, leaving voicemails) back and forth— a time waste, not to mention frustrating — clients are herded into a program that reveals Moore’s schedule, asking them to pick three times that work. Moore then selects one, and an email confirming the appointment is sent to the investor.

For some advisors, giving up the previous way of doing things is hard. It’s normal to get used to what’s familiar and comfortable — particularly the longer an advisor has used a particular type of technology. Tech firms count on this inertia — it keeps customers in their pocket. Moore suggests a bit of cold reality can help advisors see where they have inefficiencies.

He suggests an app called RescueTime that tracks your time spent on websites and software applications across mobile and desktop platforms. From there, advisors can see what may keep their practice flying and what may be dragging it down. Having the courage to jump into a new tool is the next step.

“The biggest thing with tech is that it is scary,” he says. “It’s hard to know where to get started. Sometimes you’ve just got to try one.”

And sometimes you just have to try a tool over and over again as John Olsen did with Nuance Communications’ speech recognition software called Dragon Naturally Speaking. Eight years ago, the tool was “clunky.” Today, “I would never practice without it,” says the St. Louis-based Olsen. “It’s an incredible time saver. You automate the processes and tasks that are a pain. It makes it very easy.”

“I don’t want to focus on the processes that are just housekeeping,” says Olsen. “I want someone else to do it for me. And that’s what these applications do. Advisors are in a high stress environment. To the extent you can reduce the stress and frustration that can be a game changer.” 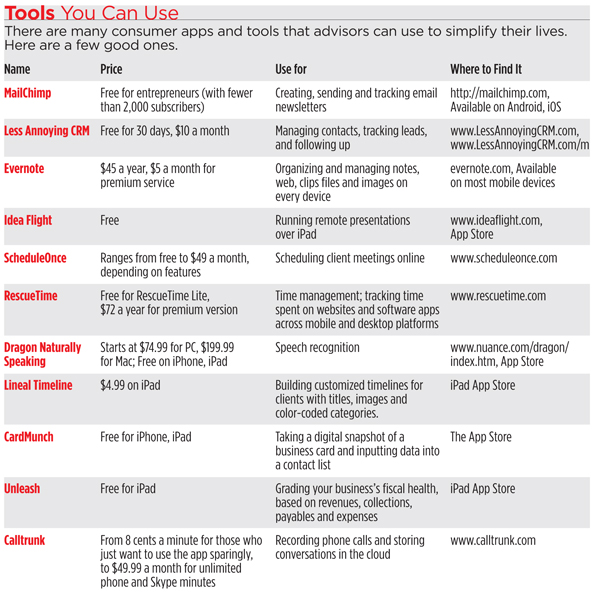 What's the one app you can't live without in your business? Tell us in the comments below or Tweet it using the hashtag #advisorapps.

Lauren Barack is a journalist, editor and photographer who has written about flea markets in Kiev, protests in New York, fishermen in St. Petersburg, and new media launches in London. She is a 2009 Loeb Award winner for her  MSN Money series, "Middle Class Crunch."