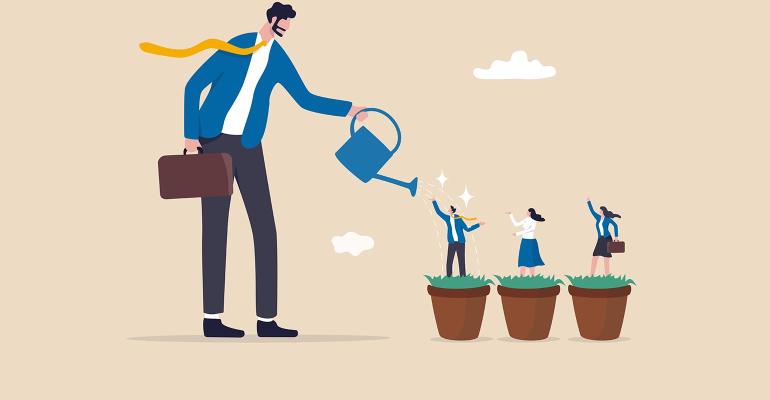 How Firms Are Finding and Keeping Employees

In a still-tight labor market, advisors are getting creative to retain and recruit staff.

The past few years have been booming for Bogart Wealth, a McLean, Va.–based firm that targets employees of energy companies with defined benefit plans: Assets are about $2.1 billion, up from around $700 million 2 1/2 years ago. To meet the demand, CEO James Bogart had to ramp up hiring. With a still-tight labor market, however, that’s required some work, everything from a revised bonus package to a new career development program.

But while Bogart has been able to increase headcount, from 12 employees pre-pandemic to 28 now, he still needs more people—and his staff shortage has, ironically, slowed down the launch of a career development program aimed at boosting recruitment and retention. “If we had more capacity internally, we would have had the program fully launched in the first quarter of this year, instead of rolling it out now,” says Bogart.

With the unemployment rate at 3.6% at time of writing, the job market remains tight. And, though some advisors say that, over the past few months, they’ve started to see more candidates applying for job openings, hiring is still a tough proposition for advisory firms. With that in mind, many firms are still getting creative to fill empty positions and keep existing staff on board. “Our clients are hiring a lot of people,” says Chris Bisenius, a recruiter at Windward Recruiting, who specializes in wealth management and financial services. “And they’re getting more creative.”

When it comes to hiring, many advisors find it’s easier to look for more-junior employees. Take JSF Financial. When the LA-based firm, which has around $4 billion in assets, experienced higher-than-normal turnover last year, firm founder Jeff Fishman found it wasn’t hard to find applicants. What was tough was attracting industry veterans, like the departing head of client service, with 12 years at the firm. So, he decided, among other steps, to hire less-experienced candidates who could assume technology tasks, freeing up time for more-experienced operations and client service staffers. "Typically, we looked for people with experience in the past," he says. “But we’ve realized we're hiring the person, not their experience, and most of what we do can be taught."

Just how difficult it is to staff up can depend on a combination of workplace policies and location. For example, job candidates in regions where the population is more attuned to masking and similar COVID-19-minded issues may be less willing to work full or part time in the office than those in other areas. As a result, advisors who’ve mandated back-to-the-office schedules in such localities sometimes find it harder to fill spots. Bogart, for example, put in place a full-time in-person policy in September 2020, and says he’s found it easier to attract people in Houston, where the locals are more than willing to work on-site, than his McLean location, an area with a preference for hybrid and remote setups.

Take Connor Jarvis, a partner in Wright LaHaie Jarvis Wealth Advisors in Canton, Ohio. Not long after Admin Extension launched, his firm started interviewing support people. A key employee was about to go on maternity leave and Jarvis realized he didn’t have a lot of time to make a new hire. “We knew it would likely take more time than we had, given the state of the labor market,” he says. He ended up tapping the program, which supplied him with someone to fill the gap temporarily.

It’s more cost-effective to keep personnel than to hire new ones. Replacing an employee can cost as much as twice that individual’s salary, according to Gallup. So advisory firms are stepping up their efforts to make their firms attractive places to stay.

With that in mind, career development is a big area of focus. Donnie Ethier, senior director of wealth management research and consulting at Cerulli Associates, has observed an increase in programs teaming rookies up with more senior advisors—especially at wirehouses and larger firms. “There’s a big push toward mentoring,” he says.

MAI Capital, a Cleveland-based firm with around $13.4 billion in assets, is one such operation. Most of its more than 300 employees are 45 years or younger. “What this young talent wants is to learn and grow,” says Lesa Evans, the firm’s chief human resources officer.

Last year, the firm launched an educational initiative giving employees access to 1,600 online and in-person classes, as well as an optional career-planning program for recent graduates, who work with senior staffers on how to further their current career trajectory or switch directions. Evans points to an employee in financial planning who, as a result of those discussions, recently decided to get a CFP, the better to switch gears and become a financial advisor. So far this year, five employees have changed lanes thanks to the program and started doing different jobs.

Bogart recently introduced a three-year program for existing client service and operations staff who want to be advisors. “The younger generation wants to know what their path to becoming a financial advisor is,” he says. The program involves stints at a variety of departments, like financial planning and portfolio management. After that, participants move into more-direct client work, sitting in on meetings with experienced advisors and helping with client communications and other tasks.

Another approach is to give employees more of a say in firm decisions. To that end, about a year ago, MAI started getting staff more involved in a variety of projects. Last year, for example, Evans turned to a group of about 30 employees in the firm’s 17 offices for their insights into the best ways to introduce a new bill pay system the firm was considering. “It’s all about employee engagement,” she says.

Many advisors are reevaluating their compensation packages as part of their recruiting and retention efforts. Brandon Kawal, a principal at Advisor Growth Strategies, which works with advisory firms on growth issues, says he’s seeing more clients ask for the most up-to-date compensation data he can find, instead of using the previous year’s research. “They’re asking, how can we get the most current trends as possible,” he says. Firms are offering higher salaries and better benefits—say, increasing a 401(k) match from 3% to 6%. And, they’re increasingly building in partnership or equity ownership as part of long-term plans. “Even if it’s a small ownership percentage, you feel like you’re an important part of the firm,” says Bisenius.

For his part, Bogart recently revised his employee bonus program. While payment used to be based on both firm and individual performance, after feedback from current employees, he’s separated out the two into different programs.

Of course, there are limits to the compensation firms can offer. For that reason, when employees reveal they’ve been offered a job elsewhere, Evans won’t automatically make a counter offer. Instead, she weighs how valuable the individual is against the cost to the firm. “We’re very strategic about where we place our bets with counter offers,” she says.