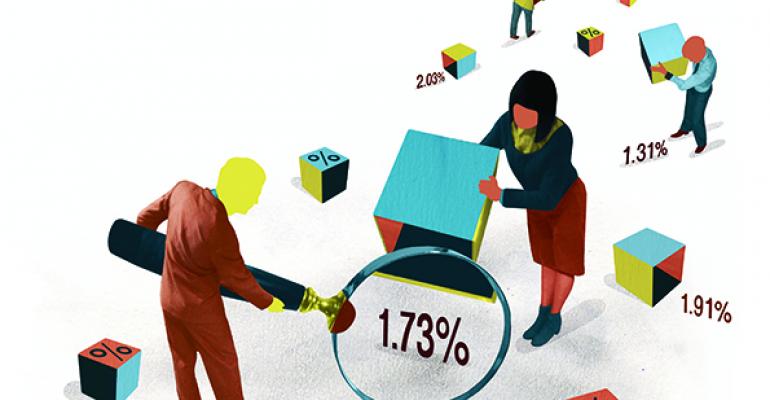 Some advisors&mdash;and clients&mdash;are beginning to suspect the traditional fee based on assets compensation model is flawed.

It was during the 2008 market crash that Rick Helbing started questioning the AUM model. The head of Suncoast Advisory Group in Sarasota, Fla., Helbing watched his assets—and his compensation—drop 15 to 20 percent. After the client considerations, Helbing said he started to wonder why his revenue was determined by something he could not control.

He began looking at other options. After meeting with his four top clients last year, he introduced a revamped model: a flat annual retainer for bigger accounts, and an AUM fee plus a one-time planning charge for smaller clients. He outsourced investment management completely. His move comes at a time when many advisors and their clients are beginning to question the value of charging 1 to 2 percent of assets under management.

Automated investment platforms, robo-advisors and low-cost ETFs are all driving down the costs of investment management—for many advisors, the primary service they provide—while technology is moving the performance and reporting tools that used to sit behind the advisor closer to the end client.

For advisors targeting younger clients, an AUM-based fee doesn’t make much sense, and increasingly high-net-worth clients suspect they are not getting their money’s worth.

“I knew the AUM fee would catch up with the industry one day,” Helbing says. “Clients look at the overall cost and start wondering what they’re getting for their money.”

While the numbers aren’t huge yet, more advisors are tinkering with the compensation model. Their efforts include everything from à la carte pricing to charging a retainer. “We’re definitely seeing experimentation with various strategies,” says Matt Lynch, managing partner of Strategy & Resources, a financial services consulting firm in Dayton, Ohio. “Advisors spend a lot of time with new clients going through an initial financial planning process. Then the work is less frequent—but the fees are the same.”

Ninety-one percent of RIAs are paid based on a percentage of assets under management, compared to 94 percent in 2013, according to GJ King, president of RIA in a Box, and there has been an increase in advisors using third-party investment managers. Still, many advisors are wary of making a change, just as they were back in the day when commissions ruled the roost.

“Advisors think they’re going to have to justify themselves and that clients will ask, well, what were you doing before?” says Dennis Gallant, president of GDC Research, a financial services research and consulting firm in Sherborn, Mass.

Not everyone thinks it’s necessary to completely revamp the model. “What you see is an over-reaction,” says Lynch. Instead, he suggests that advisors should be clearer about their services from the first meeting, so clients understand exactly what they’re getting.

Probably the most widely used new pricing strategy involves a monthly, quarterly or annual flat fee. “The retainer seems to be gaining a lot of traction,” Gallant says.

On the other hand, Sophia Bera, who founded Gen Y Planning in Minneapolis in 2013 and targets people in their 20s and 30s, charges a $999 to $1,999 initial planning fee that includes a “deep dive” into two areas—such as debt repayment—plus a monthly subscription of $99 to $199. About half of her clients also pay an AUM fee.

How Do You Figure Out How Much to Charge?

In other cases, advisors are keeping a basic AUM model, but it’s tiered. Thomas Fleishel, who heads Fleishel Financial Associates in DeLand, Fla., decided to revise his pricing so he could offer more choices, each with a different AUM fee. “People value more what they pay for,” says Fleishel, who has about $112 million in assets. One tier, for example, includes annual or semiannual reviews, along with an investment policy statement and required minimum distribution planning. Another level has two meetings a year—one for planning, the other for investment review—with a more detailed look at everything from insurance to cash-flow needs. Plus there’s an annual retainer for clients below a certain asset threshold.

But how do you figure out how much to charge? Of course, you have to take into account compliance considerations and ensure your fees aren’t deemed unreasonable by regulators. Otherwise, there’s no one-size-fits-all formula. Any method you choose is unlikely to be foolproof. Fleishel, along with his two-person support staff and one advisor, spent about three months analyzing how much time they spent on different tasks and the implications that had on how much they charged. “It’s not an exact science,” he says. Other advisors base their fees on everything from what they think the market will bear to comparable services from competitors.

You also need to be prepared to rejigger the model as you go along. “It’s been an exploration to figure out how this works,” says Jude Boudreaux, who started Upperline Financial Planning in New Orleans four years ago. From the beginning, he’s charged a flat annual fee based on income and net worth, but that has evolved. For example, he used to include the value of a client’s business, but later decided only to consider the income generated by the enterprise as an asset. On the advice of a colleague, he also veered away from charging a hard and fast amount and allowed himself some “wiggle room” to determine fees.

For her part, Bera charged her first clients a lower amount than her current fee. “I was learning from them,” she says. It took her about a year before she felt she’d found the right price. She recently added a $499 option for an hour-and-a-half video call with clients in which they take an in-depth look at two financial planning topics. She then follows up via email with recommendations.

The trend means, of course, that greater efficiency is critical to continue making a profit. “The revenue stream may not be sufficient otherwise,” says Lynch. Bera bills online through QuickBooks, receives her monthly subscription through PayPal, has a questionnaire in Dropbox that clients can fill out themselves, and provides unlimited support via email.

John Friedman, who heads 11-year-old John Friedman Financial, charges a flat fee for a specific scope of work and has never charged an AUM fee. He also has a series of online tools he’s developed over the years, such as a model for debt repayment, that have gradually increased his efficiency.

The financial advisory industry is still relatively young and evolving. It’s unclear what the business will look like in 10 years, but it’s a safe bet that the traditional percentage-of-assets pricing model will contend with others, and the end client will determine what is and isn’t of value.