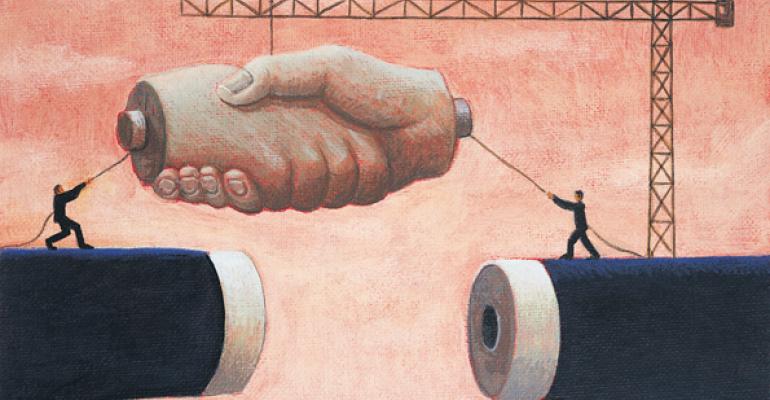 While a successful partnership can be great for an advisor’s business, unsuccessful ones can be a death knell.

Life happens, and those who are best prepared wind up the winners. Forty percent of practice owners wish to transition their practice to another party within 10 years, yet more than 40 percent of advisors who are within two years of transitioning their practice lack a succession plan, according to a 2012 Aite Group survey.

One way for advisors to be prepared in the event of something going wrong is to team with other advisors. Advisor teams have expanded in size, scope and service to keep pace with an increasingly wealthier clientele and prospect pool. It’s a way to aggregate disparate talent to improve service and to leverage scale to facilitate succession. An analytical, behind-the-scenes person might choose to join forces with an outgoing rainmaker; a trusts and estates planning specialist might team with an advisor who is a CFP and more broadly planning-focused.

Stan, a wirehouse advisor in Chicago, was the consummate rainmaker and relationship manager, and had no problem gathering assets. As his business grew, he realized that he needed to bring on more of an analytical personality. He remembered that Barbara, a colleague at his former law firm, had expressed interest in working with him again.

Barbara, a CFP, had a strong background in estate planning, giving her a specialty that would enable Stan to broaden his service offering to existing clients and prospects. Today, with Barbara handling the back office minutiae, Stan is free to focus on the relationship management and business development aspects of their practice, with the peace of mind that his successor is firmly established. Barbara’s trusts and estates planning experience proved to be a great prospecting tool. Together now for three years, the team’s assets have grown by nearly $200 million to close to $1 billion.

Partnerships are most common in the independent space where it’s not only about bringing together complementary skill-sets, but also about distributing the workload and responsibilities of being a business owner. In fact, it’s rare to see a sole practitioner who is interested in building an enterprise. Solo practitioners are typically advisors who have chosen independence as the last phase of their career, where they are less concerned about maximizing enterprise value and more focused on serving their clients with ultimate freedom.

Existing partnerships, on the other hand, can be replanted to optimize their business. For example, David, 66, and Ed, 43, met when they were private bankers in 2001. Both were frustrated by the constraints placed on them and their lack of business ownership. They left the bank seven years ago and formed a fee-only RIA. David does what he enjoys most—research, analysis and portfolio management. Ed, the more organized yet outgoing of the two, naturally took on the business management and prospecting responsibilities. Both excel at relationship management and each maintains responsibility for 100 clients. Today, they manage about $400 million in assets and are growing at an annual rate of about 20 percent. David believes he has another three years to work full time before retirement and is comfortable with Ed as his successor. They are actively working to identify other next gen advisors to fill the void when David retires.

While teaming was not always embraced by advisors, many are finding that it can deepen their service offering, and fuel growth and client referrals. But the trick is finding the right partner to make it work. While a successful partnership can great for an advisor’s business, unsuccessful ones can be a death knell.