https://www.wealthmanagement.com/sites/wealthmanagement.com/files/logos/Wealth-Management-Logo-white.png
Recent
Recent
Nine Must Reads for CRE Investors Today (Jan. 27, 2022)
Jan 26, 2023
Lacking Property Sales Data, Appraisers Look to Other Marketplace Drivers to Value Assets
Jan 26, 2023
The Healthy Advisor: Beating the Odds and a Fresh Perspective on Life With Robert Steinberg
Jan 26, 2023
The Price Is Right for Morgan Stanley Bankers’ WhatsApp Lapses
Jan 26, 2023
Blackstone Gets Extra $500 Million From University of California
Jan 26, 2023
Featured
The 10 Biggest Tax Crooks of 2022
Jan 23, 2023
The 12 Best Business Books of 2022 for Advisors
Nov 23, 2022
The Most-Revealing Onboarding Questions Advisors Ask
Jan 09, 2023
How Well Do You Remember 2019?
Jan 03, 2023
The Daily Brief
brought to you by 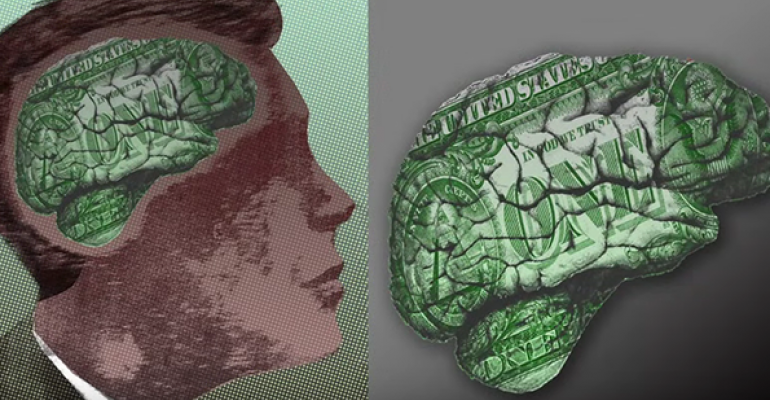 This Is Your Brain on Money

Researchers have determined that the part of the brain that is activated when using drugs such as cocaine – the nucleus accumbens – is also stimulated when making money. According to Kabir Sehgal, author of Coined, people making money and those high on cocaine had nearly identical brain scans. When further looking at brain scans of people who were high, images of money produced the most brain activity compared to those of naked women or dead bodies. He also said that outside influences also played a role in how people made financial decisions. For instance, studies show that people tend to tip more generously when the weather is nice and sunny. "Money obviously acts as a neural stimulant and it makes us act in very sort of irrational ways," Sehgal said, as quoted on MedicalDaily.com. "And so the part of the brain that lights up, again the nucleus accumbens, keeps on firing and firing and firing and obviously money excites us."

Advisors take note, the old adage–a picture is worth 1,000 words–holds true for investors looking to save for long-term goals. In a recent survey of 1,127 people, TD Bank found that those who keep images and photos of goals are nearly twice as confident they will achieve them than those who do not (59 percent vs. 31 percent). Millennials, in particular, are more prone to use this strategy. About 74 percent keep photos of their goals, compared to 58 percent of people over age 35. “Images connect us more immediately and emotionally to our personal and financial goals, and to our setting and achieving them. And images help us in our thinking and moving toward these goals,” says psychologist Dr. Barbara Nusbaum, who reviewed the study.

How Smart is Smart Beta?

Denys Glushkov, a research director of Wharton Research Data Services at the University of Pennsylvania, is the winner of the Investment Management Consultants Association’s fourth annual academic paper competition. In his paper, “How Smart are ‘Smart Beta’ ETFs?” Glushkov found that although 60 percent of smart beta fund categories beat their raw passive benchmarks, there was no evidence suggesting they outperform risk-adjusted benchmarks. Glushkob concluded that investors could achieve similar results for a fraction of the cost by implementing an optimal mix of risk-free assets with a portfolio that combines passive cap-weighted exposure to market, size and value premiums. The award carried a $5,000 prize, and the paper will be published in the spring 2016 issues of the Journal of Investment Consulting.

Americans aged 30 to 49 are most likely to be concerned about rising interest rates, with 44 percent saying they’re worried, according to a recent survey by Bankrate. "Those are the key consumer years, getting the kids through school and then to college and buying 2nd cars and all that sort of stuff, so that makes a lot of sense to me," said Robert Dye, chief economist at Comerica Bank. Meanwhile, just 37 percent of seniors 65 or older expressed concern. "Older retirees may not have a house payment anymore, and are certainly not contemplating a new house, and they probably have a good handle on their debts," Dye said. Overall, four in 10 Americans were worried about rising rates and the potential impact on their personal financial situation and the U.S. economy.