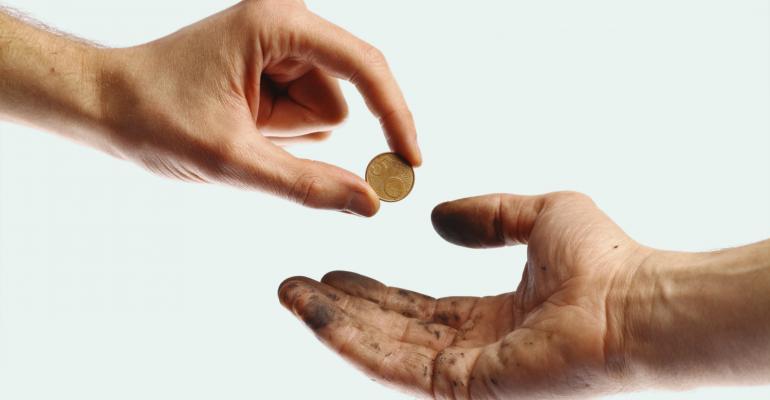 Simplifying complicated facts—and doing some rounding off.  A partnership reported a $33 million charitable contribution for property donated to a university. The partnership had acquired its interest in the contributed property from some other entities. The Internal Revenue Service initially said that the value of the contribution was overstated by $29 million. Because of the overstatement, the IRS imposed an accuracy-related penalty. In Tax Court, the partnership said that the IRS was in error. The IRS responded: The partnership’s contribution “is a sham for tax purposes or lacks economic substance, and therefore the transaction should be disregarded for federal tax purposes and the deduction disallowed in its entirety.”

The partnership brought a partial summary judgment motion: “. . . the  doctrines ‘sham’ and ‘lack of economic substance’ are not applicable to . . . whether a taxpayer’s contribution to charity is allowable under section 170.”

Introduction of Tax Court’s opinion sets the stage. Generally, the term "economic sham" (as opposed to "factual sham," i.e., a transaction that did not occur) describes a transaction that actually occurred but that exploits a feature of the Internal Revenue Code without any attendant economic risk. See, for example, Horn v. Commissioner, 968 F.2d 1229, 1236 n.8 (D.C. Cir. 1992), rev'g Fox v. Commissioner, T.C. Memo. 1988-570. The IRS also cited Horn v. Commissioner, 968 F.2d at 1237-1238, for the proposition that a transaction lacks economic substance if it had no reasonable prospect of earning a profit and was undertaken for no business purpose other than to obtain tax benefits.

The IRS’s argument wasn’t that the partnership didn’t, in fact, transfer property to the university or that the gift wasn’t, in fact, a charitable contribution. The IRS didn’t dispute that the partnership made a contribution within the meaning of IRC Secton 170(c) when it assigned its interest in the property to the university. But, the IRS argued: "[T]he 'economic substance,' 'sham,' and 'substance over form' doctrines may be applied to disallow a charitable contribution deduction when the tax benefits claimed by a sham entity run counter to the legislative goals underlying section 170."

Surprise! “While the parties have voluminously briefed their positions,” the Tax Court noted, “they have, for the most part, talked past each other.” The partnership relying principally on the Court’s opinion in Skripak v. Commissioner, 84 T.C. 285 (1985), argued that the IRS, having conceded that there was an unrequited gift to the university, can't freight Section 170(a) with any inquiry into the bona fides of the gift or into the partnership's purpose in making the gift. The IRS, relying principally on the Memorandum Opinion in Ford v. Commissioner, T.C. Memo. 1983-556, 1983 Tax Ct. Memo LEXIS 227, takes the partnership under fire: “[Partnership] was organized solely for tax avoidance purposes, lacked economic substance, was a sham, and is not a valid partnership for tax purposes under Commissioner v. Culbertson, 337 U.S. 733 (1949).  Neither argument precludes the other, so both may be right.”*

The partnership’s argument. It relied principally on Skripak, where the taxpayers participated in a book contribution program. High-tax-bracket individuals purchased portions of a book publisher's excess inventory and, after holding the books for more than six months (the then long-term capital gains holding period), contributed them to various small, rural, public libraries. The book contribution program was carried out with the assistance of a corporation, formed solely for that purpose. It located the individual donors and the donee libraries, purchased the books from the publisher and resold them to the donors. Each donor, under an "offering memorandum," was "free to dispose of books * * * at any time, in any manner and to any person or entity selected by him * * * [with the expectation that] purchasers will use the books for the support of institutions in need by donating them to * * * [the libraries]." The corporation offered to "arrange for and execute donations on behalf of * * * [the individual purchasers]." The offering memorandum contemplated that participants would claim charitable contribution deductions equal to the publisher's "catalog retail list price," triple what they would pay for the books.

The IRS denied charitable contribution deductions for participating in the program, arguing that the "various documents purporting to evidence * * * [the taxpayers'] acquisition and disposition of the books * * * merely constitute a transaction wholly lacking in economic substance and reality, a sham transaction that should be completely disregarded for Federal tax purposes." The IRS further argued: The individual taxpayers "neither owned nor contributed books to the libraries, and that any contributions * * * [were by the corporation, not the taxpayers]." The IRS concluded that the taxpayers "purchased tax deductions, not books." The Tax Court rejected the IRS’s argument that the taxpayers had "no chance of realizing an economic profit" under the program on the ground that those facts, even if true, were "not pertinent to [its] inquiry." The Court stated the legal principles:

The deduction for charitable contributions provided by section 170 is a legislative subsidy for purely personal (as opposed to business) expenses of a taxpayer. Accordingly, doctrines such as business purpose and an objective of economic profit are of little, if any, significance in determining whether petitioners have made charitable gifts. We think that the various documents in fact comport with the economic substance and reality of these transactions, and we conclude that the petitioners did in fact own and contribute the books to the various libraries.

The Court further noted that, because "the deduction for charitable contributions was intended to provide a tax incentive for taxpayers to support charities[,] * * * a taxpayer's desire to avoid or eliminate taxes by contributing cash or property to charities cannot be used as a basis for disallowing the deduction for that charitable contribution." Thus, the Court held that the taxpayers were entitled to deductions for their contributions of the purchased books to the libraries.

However, if you read on, you’ll see that the value of the allowable deduction was itsy-bitsy, teeny-weeny.

The partnership had an additional argument that business purpose and economic substance are irrelevant in determining the allowance of a charitable contribution deduction. It relied on this statement in Scheidelman, 682 F.3d 189, 200 (2d Cir. 2012), vacating and remanding (T.C. Memo. 2010-151): "It is true the taxpayer hoped to obtain a charitable deduction for her gifts, but this would not come from the recipient of the gift. It would not be a quid pro quo. If the motivation to receive a tax benefit deprived a gift of its charitable nature under Section 170, virtually no charitable gifts would be deductible." The partnership argued that, because it received nothing from the university in exchange for its contribution, there was no quid pro quo; hence, there was no basis for the complete disallowance of its deduction.

The IRS’s arguments. Consistent with Skripak, the IRS doesn’t apply the economic substance or any other judicial doctrine in determining whether the partnership made a charitable gift to the university. But, the Tax Court's opinion in Skripak doesn’t preclude the IRS from relying on the "sham" and "lack of economic substance" doctrines in this case to disallow the $33 million tax benefit that the partnership claimed on its 2003 Form 1065.

Tax Court’s "ultimate findings of fact" in Ford: "The transfer of the Aegir by the partnership to Makai Corporation was carried out for the sole purpose of tax avoidance in order to gain a tax deduction for its partners through the donation of the Aegir to the University. Makai Corporation was a sham and acted solely as a conduit for the tax avoidance purpose." On the basis of those findings, the Tax Court held that the partnership made a direct gift of the Aegir to the university (resulting in a zero contribution deduction for the taxpayers and the other partners in the partnership). The Court also found that Makai "was utilized for the sole purpose of tax avoidance and was without substance," citing case law standing for the proposition that "the tax aspects of a particular transaction depend upon its substance and not the form in which it is embodied."

The IRS stated that, at trial, it "will present evidence that [Partnership's] acquisition and donation of the successor member interest lacked economic substance because the transaction did not have a non-tax business purpose"; also that "the members invested in [Partnership] to obtain an inflated charitable contribution deduction, which had no effect on their economic positions, other than to reduce taxes in the year of donation."

Tax Court’s analysis. In Skripak, and in similar cases following Skripak upon which the partnership relies, the Court was faced with taxpayers who participated in tax avoidance programs that, in a nutshell, involved buying tangible personal property at distress prices for the sole purpose of contributing the property to a qualified charitable recipient.

Ford, on the other hand, didn’t involve a taxpayer's direct purchase and subsequent contribution of property. In Ford, the issue was whether the formation of a corporate shell should be respected for Federal tax purposes where the sole purpose of the corporation was to enable the taxpayers (and others similarly situated) to obtain a charitable deduction that would otherwise have been unavailable to them. The Court held that, because the corporation was formed solely for tax avoidance purposes and was without economic substance, its separate existence must be disregarded for tax purposes. The Court recast the transaction (a contribution of the corporation's stock) as the partnership-shareholder's direct contribution to the university of the property that it had previously contributed to the corporation. As recast, the transaction gave rise to no contribution deduction. “Skripak and its progeny* are distinguishable from Ford, which embodies the longstanding and, therefore, unremarkable judicial principle that an entity organized and used for the sole purpose of participating in a tax avoidance transaction (i.e., to metamorphose ordinary income property into a capital asset) will be disregarded for Federal tax purposes.”

Tax Court holding. Whether the partnership was organized solely for tax avoidance purposes and lacked economic substance may be a relevant issue in determining whether its contribution to the university entitled the partnership’s members to charitable deductions. It remains to be seen whether that is the case. Thus, the partnership’s motion for partial summary judgment is denied.