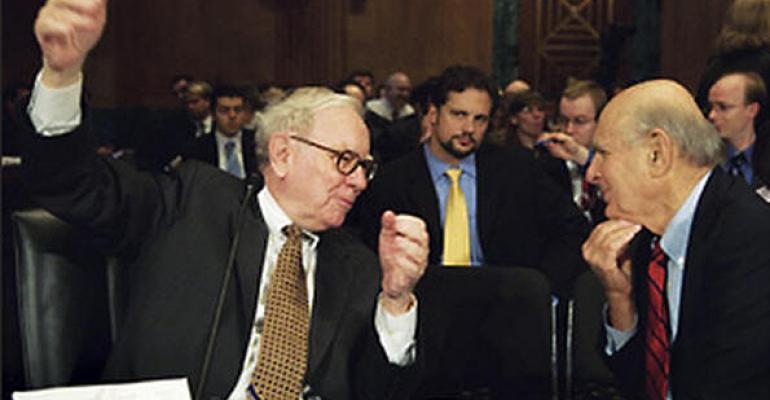 That extra “t” in Buffett is going to cost you.

Zhu Ye, Chairman of Da Lian Zeus Entertainment, a gaming company, paid $2.35 million in an online auction by Glide, a San Francisco charity that aids the city’s poor and homeless, for lunch with Warren Buffett and six of Zhu Ye’s guests at Smith & Wollensky in Manhattan.

We all know that a donor has to reduce his charitable deduction by the value of any goods or services received.

Value of food and drink for seven at a New York Steakhouse: that’s easy — $7,000 tops, including coat checking.

But what about the value of “services,” lunch with the Oracle of Omaha? Over the years, the IRS hasn’t claimed that paying to rub shoulders with a celebrity has a tangible value. But suppose that while the shoulders touch, you pick the Master’s brain for investment advice? That isn’t on the menu for the Buffett lunch. But if advice is received, the charitable deduction would have to be reduced by the fair market value of such advice.

Example — a good faith estimate of an auctioned item.  Donor attends an auction held by Charity. Before the auction, Donor receives a catalog of items that will be available for bidding and Charity’s good faith estimate of their value. The catalog qualifies as a written disclosure statement under IRC Section 6115. Donor successfully bids and pays $500 for a vase that Charity valued at $100. Donor has no reason to doubt the accuracy of that value. Donor’s payment qualifies as a contribution. Before making the payment, she knew that the estimated value of the vase was less than her payment, and her payment exceeded the estimate. In determining the amount of her deduction, Donor may treat the vase’s estimated $100 value as its FMV. Thus Donor is deemed to have contributed $400. Reg. Section 1.170A-1(h)(5), Ex. 2.

Ignorance is tax bliss. The following example is not from Treasury regulations, but is mine. It contrasts how much a knowledgeable donor and an unknowing donor are deemed to have contributed.

Example. Donor A bids and pays $2,000 for a lithograph valued at $500 in good faith by the charity in its auction catalog. Donor A, however, knows the lithograph is worth $1,600. He has seen the same lithograph selling in a number of downtown art galleries for $1,600. So, according to the regulations (above), he can only deduct $400. His twin brother, Donor B, bids on an identical lithograph at the same auction and gets the lithograph for $2,000. Donor B hasn’t been to any of the art galleries and hasn’t spoken to his twin in seven years. Further, Donor B doesn’t know anything about art — only what he likes. Presumably, Donor B can deduct $1,500 ($2,000 paid minus $500 good faith estimate of value by the charity).

Disclosure. I don’t have information about Zhu Ye’s United States income, if any. So, my discussion of the tax consequences is purely academic. Zhu Ye is reported to have said that he won’t claim the $2.35 million payment as a business expense deduction in China.

End note. Warren Buffett and I spoke for about 30 minutes before testifying at the November 15, 2007 Senate Finance Committee hearing on Estate Tax Reform. It didn’t cost Mr. Buffett a thin dime. The first thing he said to me was, “How do you pronounce your last name?” He then used my first name so often that it was noticeable. In an excellent biography of Mr. Buffett, “Snowball,” I learned that a certificate from the Dale Carnegie Institute hangs on the wall of his Omaha office.