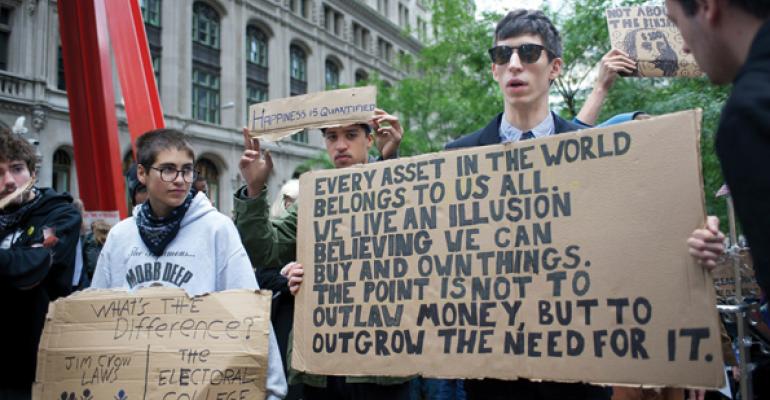 Occupy Wall Streeters in NYC Are "Children of the Elite"

The whole Occupy Wall Street movement was less spontaneous than advertised. Rather like the pre-existing anti-gun (and therefore personal liberty) political agenda that used a tragic event or two to cajole lawmakers into creating questionable legislation, "It seems those Occupy Wall Streeters were," as the New York Post reports today, "a lot closer to the 1 percent than they would like to admit."

The Post points to a study from CUNY’s Joseph A. Murphy Institute for Worker Education and Labor Studies on the OWS movement in New York. The report found "that many of the protesters were highly educated and not nearly as down on their luck as they portrayed."

"A third of protesters in the Occupy Wall Street movement in New York lived in households earning more than $100,000 and more than two- thirds were employed professionals."

The Post article quotes Professor Ruth Milman, an author of the study, as saying: "It's a pretty affluent demographic and highly educated. . . . many were the children of the elite, if you will."

Basically, the group was a tool for the Obama Administration in its run for re-election. Or as our own Diana Britton wrote: The idea behind “The Debt Resistors’ Operations Manual, written by an anonymous collective of resistors, defaulters and allies from Strike Debt and OWS, is to help those affected by debt. But most advisors wouldn’t be caught dead doling out this advice. Lie about your identity to avoid emergency room bills; stop paying student loans; and default on a payday loan. These are just a couple examples of their words of wisdom."

I wrote about the inane far, far left politics like this (quoting from a Hillsdale College professor; Hillsdale is a great Libertarian-leaning school, BTW): "The profit that the Occupy Wall Street protesters decry is the reason the world has access to clean water and anti-viral drugs."