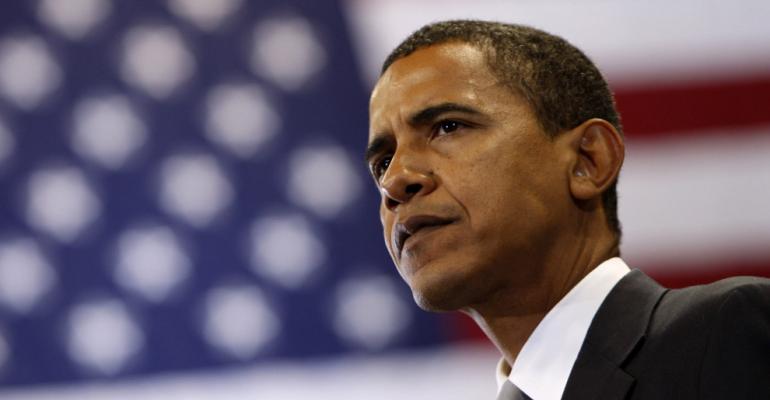 The Morning After: Obama Wins, but What If Romney Had Won?

As readers of this opinionated blog know, I believe in free markets and free minds. In short, I am a Libertarian. What scares me about the Obama win was that populist, eat-the-rich, level-the-playing-field hyperbolic speeches will continue to ring out, rhetoric that is simply, economically and factually speaking, poppycock. And that may cause a continuation of failed government "solutions." For example, contrary to the popular press and Democratic populist oratory, financial markets were not deregulated, just misregulated, says John A. Allison, who stepped down in 2008 as the CEO of BB&T bank after 20 years at the company and therefore had a front row seat to the effects of government regulation on the financial services industry. In his book, The Financial Crisis and the Free Market Cure, Allison states, "We did not have a sudden burst of greed that created the financial crisis. The causes are far deeper, longer-term in nature, and far more destructive." While financial institutions made "very serious mistakes that contributed to the crisis," Allison writes, those mistakes were "far less important than government policy mistakes." (Allison's book made the NY Times best seller list, by the way.)

Indeed, the financial services industry is one of the most regulated industries in the country, says Allison (although to that over-regulated, misregulated list I would add the firearms industry). I will write more on Allison and his insightful book when I finish it! But for now, I am excerpting an article that our Staff Writers Diana Britton and Megan Leonhardt wrote about what if Romney had won. She surveyed Wall Street players, including securities lawyers and broker/dealer executives. (Please note that in a post yesterday I took the position that no matter who won the presidency, it might not matter much. Why? Because the country's fiscal problems are not only short term, but long term --- and structual. To prevent the country from going broke, Social Security and other "mandatory payments" will need to be overhauled because such payments account for 88% of federal spending. An act of Congress would be required. Don't hold your breath. It's going to get ugly over the next decade, fiscally speaking.)

Romney was not my man, the Libertarian Party candidate Gary Johnson was. Johnson was a two-term governor of New Mexico, and, alas, was almost invisible to the voting public. As advisors, please recall our article by our sister publication Trusts & Estates, "A View from the Fiscal Cliff: Say Goodbye to Some Taxes and Incentives that Will Likely Expire in 2013."

That said, onsider the following report by Diana, a War of the Worlds excercise, an imaginary, what-if-romp in the political/economic world if Romney had one. (I should also point out that there is almost no difference in stock market returns when either party occupies the Oval Office.)

Romney’s win and a Republican presidency will no doubt have a significant impact on financial services and the markets at large.

Experts agreed that the conclusion of the election season, especially in regards to the presidential race, is good for the market. Now that the uncertainty of the situation is resolved, the market is likely to see an uptick regardless of the outcome.

“Regardless of what happens, the market itself always likes certainty over uncertainty,” said Tim Steffen, director of financial planning for Robert W. Baird & Co.

When there is a result and there’s clarity restored as to the direction of future policy, the market will usually remain level or see a bump, says Envestnet’s managing director Jim Patrick.

Tuesday’s Republican victory is likely a good thing for the financial services industry. The old Republican agenda has traditionally been to reduce government spending as well as regulators’ influence over business. That means less regulation for Wall Street and other financial institutions, said Richard Roth, founder of The Roth Law Firm in New York City, which specializes in securities law. (Richard Roth blogs for this website, Inside the Regulatory Best.) Alternatively if Obama won, there would be more regulations on the industry, Roth said.

But several experts predicted that Romney’s win would not help immediately solve the looming “fiscal cliff,” anymore than Obama’s re-election would have.  To clear this hurtle, bipartisan collaboration is needed to solve the issues surrounding the combination of tax increases, expirations and budget cuts set to take place in 2013, said Reto Gallati, the author of several books including Risk Management and Capital Adequacy.

Many believe that the combination of tax increases and spending cuts will push the economy into a recession in 2013. “The issues are so big that whoever wins must be willing to compromise with the other side,” Gallati—a  former chief risk officer and head of investments at Nuveen Investments—said.

Instead, experts agreed that now that Obama was facing a lame duck session, a “kick the can down the road” was the most likely outcome. Roth predicted Congress would extend the tax cuts at least for another six months. “They don’t call it a Fiscal Cliff for nothing,” Roth said. “It is a cliff. It is a drastic change in the estate and tax structure, and I don’t think anyone wants a drastic change.”

No matter what happens in the lame-duck session, we’re likely to see some kind of tax reform next year, Friedman said. Any tax reform under Romney will likely be revenue-neutral, meaning it won't bring in any additional revenue.

Romney’s election may also impact regulatory measures, as well as the level of activity at agencies, such as the U.S. Securities and Exchange Commission and Financial Industry Regulatory Authority.

“All of my clients, maybe with one exception, are sick and tired of being dragged down to the SEC or FINRA for the most mundane things,” Roth said.

Under Romney, not only could these agencies budgets be cut, but leadership—including the SEC’s head Mary Schapiro and Chairman of the Federal Reserve Ben Bernanke—could also dramatically shift.

“Whenever someone new is elected, it’s an excuse to clean house,” Steffen said, adding that even if Obama had remained in control, we could have seen a reshuffling of those in cabinet positions.

“I don’t think there’s any question that whoever he [Romney] appoints as SEC chairman will likely be in the mold of a Harvey Pitt," the much-maglined commissioner who was seen as creating "a kinder, gentler SEC," said Andrew Stoltmann, an attorney with The Stoltmann Law Offices in Chicago. Then there was Chris Cox, "who was a very anti-investor Congressman from Orange County.”

New regulations that were passed under Obama—such as the Dodd–Frank Wall Street Reform and Consumer Protection Act —may also experience some changes, as Romney has repeatedly said that the 2010 financial reform law was way too regulatory. “The SEC chairman has a ton of sway on Dodd-Frank and issues like the fiduciary duty, which I think it absolutely crucial for investor protection,” Stoltmann added.

But while Romney has said on the campaign trail that he planned to repeal and replace the legislation if elected, experts said that such a drastic step was unlikely to happen. “The law’s not going to get repealed,” said Andy Friedman, principal of Washington Update. “I think the democrats will have plenty of votes in the Senate to block any repeal, even if the Republicans win the Senate.”

Barbara Novick, vice chair and head of government relations at BlackRock, also doesn’t believe there is going to be a wholesale repeal of Dodd-Frank under Romney, but we may see some tweaking of the rule. The legislation is enormous, and while a couple provisions have been controversial, few people have said they’d like to see wholesale change, she said.

“For people who think that a Romney victory is going to translate into a complete change of course, I would caution them that that’s not a very likely scenario,” said Barbara Novick, vice chair and head of government relations at BlackRock.

But Romney’s election could slow the implementation or enforcement of many of the reform law’s provisions, added David Thetford, a securities compliance principal analyst for Wolters Kluwer Financial Services. “Romney would tend to put less emphasis on it,” Thetford said, noting Romney’s lack of support would likely slow the rate of implementation.

Another major regulatory issue facing the incoming president and Congress is the SEC budget, Thetford noted. With the enactment of Dobb Frank and other financial regulatory initiatives pending, the SEC’s resources have been spread thinner and thinner. But Thetford noted that the election results may not change the situation either way, adding that he didn’t believe anyone would approve the much needed budget increase for the agency.

But Steffen cautioned against putting too much value on the presidential race alone, saying that the “congressional ones were equally important. Presidents don’t write bills, they just sign them,” he said.

“If the RIA fiduciary duty standard gets imposed on brokers, I think they will be exposed to legal liability the likes of which they’ve never seen,” said Andrew Stoltmann, an attorney with The Stoltmann Law Offices in Chicago. “And I think so many of the practices that are just inherent in the broker/dealer model, from a legal standpoint, will be really problematic.”

“These things will progress at one rate or another,” Thetford said, but noted that with Romney in office, emphasis on and enforcement of initiatives like Dodd-Frank were likely to fall off.

Nonetheless, experts agreed that the conclusion of the election season, especially in regards to the presidential race, was good for the market. Now that the uncertainty of the situation was resolved, the market was likely to see an uptick regardless of the outcome. “Regardless of what happens, the market itself always likes certainty over uncertainty,” said Tim Steffen, director of financial planning for Robert W. Baird & Co.

When there is a result and there’s clarity restored as to the direction of future policy, the market will usually remain level or see a bump, said Envestnet’s managing director Jim Patrick.

“Of course, if you do the math, that doesn’t actually solve the problem,” said Novick. “He’s got to do something more than that,” such as address spending and entitlements as well.