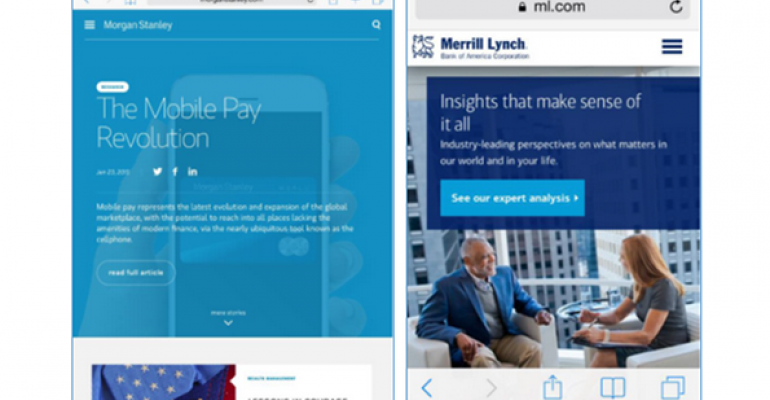 Morgan Stanley and Merrill Lynch Wealth Management revamped their public websites in February. The most notable change? They are both using responsive design, according to a blog post on Corporate Insight. The new sites are designed for desktop or mobile and will adjust to different screen sizes depending on which device a user is on. “The focus on tablet and mobile browsing will only continue to grow throughout the brokerage industry as investors, particularly the younger demographic, increasingly access their financials from handheld devices,” writes Eric Stahler, research associate for eMonitor and Broker Monitor at Corporate Insight. The sites are also more focused on the firms’ research.

Will SEC Shut it Down?

Major new Tesla product line -- not a car -- will be unveiled at our Hawthorne Design Studio on Thurs 8pm, April 30

Earlier this week, Elon Musk teased about a “major new Tesla product line” on Twitter. Tesla shares jumped at the news, almost instantly boosting the company’s market capitalization by more than $1 billion, according to MarketWatch. But an SEC rule, known as the Regulation Fair Disclosure, prohibits companies from giving out information just to certain groups without disclosing it to everyone. And therein lies the problem because a tweet alone reaches a limited audience and can provide market-moving news. The regulator has approved companies’ use of social media for announcements as long as investors are alerted.  While Telsa says it “carefully” follows SEC requirements, could Musk’s envelope-pushing antics lead to a crackdown?

Marketers are already harvesting the personal information shared on social networks, and a new hedge fund wants in on the action. Spark Capital, an early investor in Twitter, has launched Tashtego, a hedge fund firm that will rely on algorithms to track social information flowing from portfolio companies to bet on or against stocks. Tashtego is named after a harpooner in Herman Melville’s Moby Dick, and Spark Capital’s white whale is to grow its social hedge fund to $1 billion in capital.

Bitcoin may be growing in legitimacy in financial circles with the launch of a Bitcoin exchange and the approval of a Bitcoin fund, but it's still a long way from going mainstream. Engadget is reporting that the college football Bitcoin Bowl is being rebranded after one year. The bowl game, held in St. Petersburg's Tropicana Field (a baseball park), was previously also known as the magicJack St. Petersburg Bowl and the Beef O'Brady's Bowl. The three-year deal between BitPay and ESPN was torn up by mutual consent, possibly due to the lukewarm reaction to it by potential advertisers, as well as the dwindling value of the currency.