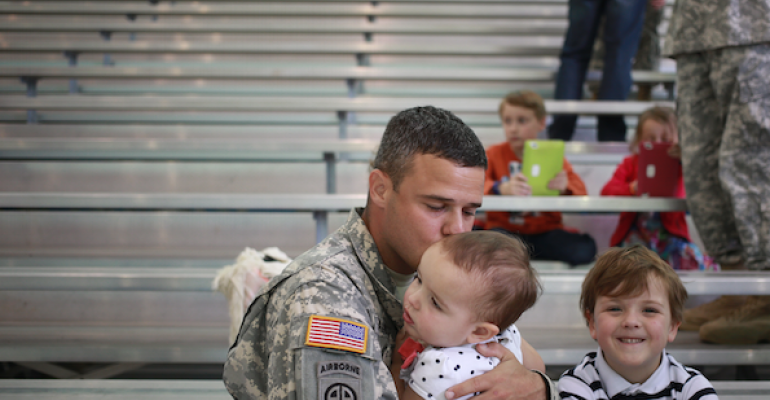 Despite the troubling idea that the high suicide rate among military members and veterans may be more linked to financial troubles than mental illness, and recent legislation to study the issue around miliary members and finance, families of career military personell (senior officers with income of at least $50,000) are on the whole more likely to exhibit good financial behaviors than civilian families, according to the First Command Financial Behaviors Index, and they are doing so with the help of financial advisors. The index, which surveyed 530 U.S. consumers, found more military families monitor pay stubs, stick to a budget, check mutual fund allocations and stay updated personal investments than civilians. Military families were also 38 percent more likely to frequently visit a financial advisor. Scott Spiker, the CEO of First Command Financial Services, said the financial diligence may be in response to anxiety over cuts to defense spending.

Yellen Earns an "A"

In evaluating Janet Yellen’s first 20 months on the job as head of the Federal Reserve, Bloomberg’s Matthew Winkler reports she’s doing a great job, particularly in regards to market stability. The average volatility of U.S. Treasury bonds has fallen 35 percent since Yellen took over from Ben Bernanke and is 69 percent lower than it was under Greenspan. Additionally, Yellen’s strategy of communicating with the public is paying off. The implied volatility (a measure of anticipated price swings) of the Standard & Poor's 500 Index declined to 14.3 percent, down from the average 21.53 percent during the Bernanke era and 19.61 percent under Greenspan, according to Bloomberg’s analysis.

Single Seniors on the Rise

A recent report on demographic changes by the Public Policy Institute of California highlights a growing issue among seniors in the state that could have nationwide ramifications—a drastic increase in the number of “single seniors.” According to the study, between 2012 and 2030, the number of married couples over the age of 65 will increase by 75 percent, while the number who are divorced or separated will increase by 115 percent and the number who’ve never married will surge by 210 percent. The concern here is the reduced availability of family members to take care of these seniors as they age, be it the lack of a spouse through separation, divorce or never being married or a decrease in the number of seniors who have children as a result of the same. Just as the movement for seniors to age at home is really starting to pick up steam, they may be losing the support structure that makes such plans tenable without direct cost to the states.