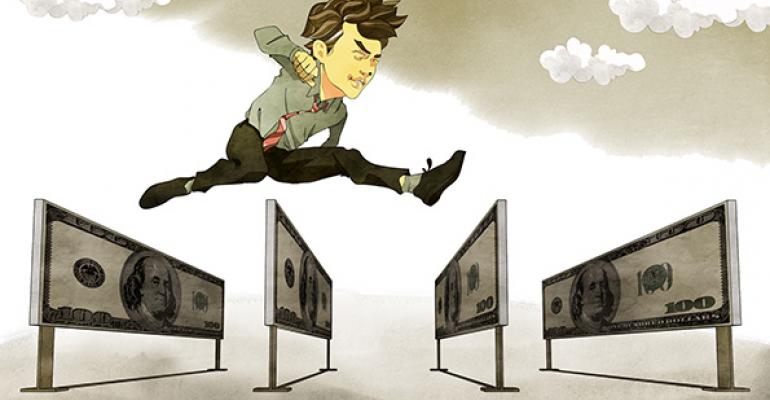 Colorado-based financial planner James Osborne of Bason Asset Management suggests it is too easy to become an affiliate of a Registered Investment Advisor. That’s the downside of the shift away from brokerages to independent planners. Whereas brokers must pass a difficult series 7 exam, to be affiliated with an RIA, advisors merely need to pass the “much easier” Series 65 exam. "So we find ourselves in a world where the only barrier to holding oneself out as a competent fiduciary advisor is a few hundred dollars in state registration fees and a 3-hour exam,” Osborne writes. "I can’t imagine anyone intentionally designing a system where we are trying to make it easier to be a fiduciary advisor than a stock broker, but that is where we are."

Liquid alts investment firm Salient Partners has agreed to acquire Forward Management, a San Francisco-based asset management firm. Terms of the deal, which is expected to close in the second quarter of 2015, were not disclosed. Once completed, the combined firm with 250 employees and offices in Houston, New York City and San Francisco will manage and advise more than $27 billion in assets. “Salient and Forward have a lot in common—we’re both independently-owned businesses with a focus on innovation in asset management that offer risk-conscious investment tools to address challenges of modern-day markets,” said Alan Reid, chief executive officer of Forward. “We have a mutual respect for the businesses we have built from the ground up, and together we will move to a new stage of development, while preserving the central tenets of what Forward has become.”

Of Love, Marriage and Finances

Talking about debt and money is important in a relationship, according to a new Scottrade survey. Scottrade questioned more than 1,400 clients from its Client Advisory Forum in January, and found that more than 80 percent of them were more interested in love than material needs. In addition, more than half said talk about debt and finances should come up within the first year of dating, and two-thirds said couples should merge assets only after getting married. “It’s important to make sure you’re on the same page financially as your partner,” said Joe Correnti, Scottrade's Senior Vice President of Brokerage Products. “Defining long-term goals and investing for the future is a great way to demonstrate you care about you and your partner’s life together.”

A Pennsylvania financial advisor has been charged with fraud for allegedly stealing $2 million from 26 clients over seven years. Jason Muskey of Muskey Financial Services in Lackawanna County, Pa., has been charged with mail fraud, money laundering and identity theft. He allegedly perpetrated the fraud by forging the signature of his clients allowing him to spend the money himself. Authorities are seeking to freeze his assets and seize his property, including a timeshare in Grand Cayman, two boats, three trailers and a pick-up truck. He faces 42 years in jail if convicted, PAHome.com is reporting.