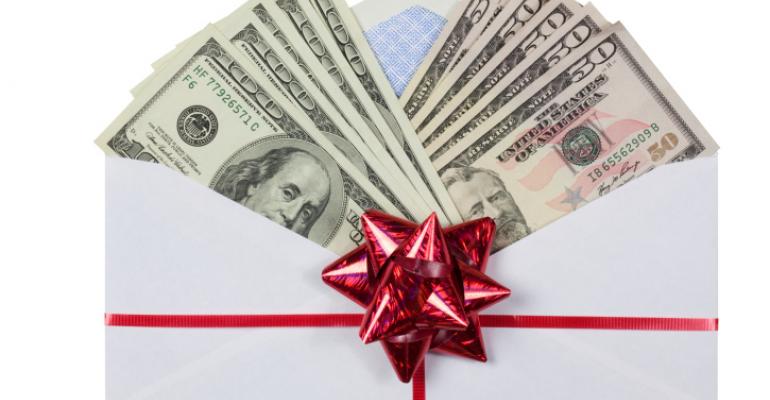 The letter-ruling story that you are about to read is true. Only the “y percent” annual unitrust payment has been changed to “5 percent,” and a charitable contribution of an “undivided X” interest in the annual unitrust amount has been changed to “undivided 50 percent.” The original figures were redacted before the letter ruling’s publication, under the Freedom of Information Act, to protect the identity of the ruling’s recipient. I've substituted numbers for the letters.

Heads up about the additional issues that I raise at the tail end of this article.Generally, the Internal Revenue Service rules only on questions asked of it. It doesn’t volunteer other stuff about which you should be aware. The points not covered in the following favorable ruling can do your client in and do the client out of tax benefits.

What happened. The donor and his spouse created a fixed percentage charitable remainder unitrust (STAN-CRUT) with community property. They were the trustees. The trust is governed by their state’s law.

The trust provides for an annual payment to the donor and spouse of a unitrust amount equal to five percent of the net fair market value of the trust assets as of the first day of each year. Upon the death of either the donor or spouse, the survivor is entitled to the entire unitrust payment. Neither the donor nor spouse retained a right to revoke the respective survivorship interest transferred at the time the trust was created.

The spouse died, leaving the donor as the sole trustee and the sole beneficiary (recipient) of the unitrust payment. As the surviving settlor (grantor) of the trust, the donor has the right to add or delete qualified charities to receive the remainder.

1.The Donor will be entitled to an income tax charitable deduction for the contribution of an undivided interest in the charitable unitrust payments transferred to the charity.

The present case is analogous to the situation in Rev. Rul. 86-60. The donor and spouse retained an income interest in the trust. The donor, the surviving settlor of the trust, proposed to transfer a portion of his interest in the unitrust payment to the charity, the remainder beneficiary of the trust. Based on the representation that under State  law, the  donor’s  undivided  50  percent  interest  in  the unitrust payment transferred to the charity merges with 50 percent of the charity’s remainder interest, the IRS concludes that the donor’s transfer of an undivided portion of the unitrust interest will qualify for a charitable deduction. The amount of the donor’s charitable deduction will equal the present value of the right to receive the annual payments for a term starting on the date of the contribution to the charity and ending on the donor’s death.

2. The donor will be entitled to a gift tax charitable deductionunder Section 2522 for the fair market value of his gift.

3.The transfer of the undivided interest in the unitrust payments will not cause the trust to cease to be a trust described in IRC Section 664(d)(2).

Reg. Section 1.664-3(a)(4) provides that the governing instrument may provide that an amount other than the unitrust amount shall be paid (or may be paid in the discretion of the trustee) to an organization described in IRC Section 170(c) provided that, in the case of distributions in kind, the adjusted basis of the property distributed is fairly representative of the adjusted basis of the property available for the payment on the date of the payment.

The regulations thus authorized the current distribution of unitrust assets to a charitable organization. In this case, it's represented that under state law, upon the donor’s transfer of an undivided 50 percent portion of his unitrust payment to the charity and the donor’s irrevocable designation of 50 percent of the remainder to the charity, the charity’s interest in the unitrust payment and the remainder will merge. Although a partial termination of the trust will occur, the trust will continue to be in the form of, and will function as, a CRUT within the meaning of Section 664(d)(2).

Before I get to the issues not covered in this letter ruling, let me tell you about a fable by Ambrose Bierce.

An Associate Justice of the Supreme Court was beside a river bank when a Traveler approached and said:

“I wish to cross. Will it be lawful to use this boat?”

The Traveler thanked him and, pushing the boat into the water, embarked and rowed away. But the boat sank and he was drowned.

“Heartless man!” said an Indignant Spectator. “Why did you not tell him that your boat had a hole in it?”

“The matter of the boat’s condition,” said the great jurist, “was not brought before me.”

Here are eight issues not brought before the IRS in the above ruling and my answers:

Q. 1. Suppose the trust consists entirely of marketable securities. Is a qualified appraisal necessary? If so, why?

Q. 2. In computing the value of the income tax charitable contribution, does it matter whether the trust was created more than one year ago?

Q. 3. Suppose the charitable remainder organization is a private foundation and the trust was created more than one year ago. All the trust assets are held long term and are marketable. If the donor’s life interest is contributed to the private foundation, does the “qualified appreciated stock” rule apply so that the charitable contribution for the life interest will be based on the fair market value rather than the lower basis?

A. Nope. Remember from the answer to Q. 1., the donor is deemed to have contributed a capital asset (the life interest) and not the underlying assets. So, even though the underlying assets are “qualified appreciated stock,” the favorable rules for contributions of qualified appreciated stock to a private foundation are inapplicable. Thus, the value of the contribution is the cost basis allocable to life interest.

Q. 4. Any problem if the CRUT’s only asset is un-mortgaged real property and a public charity receives an undivided interest in that real property? If a problem, how might it be overcome?

A. If the beneficiary of the CRUT and the charity each own an interest in the real property, the IRS could look upon that as a prohibited act of self-dealing. The problem can be overcome this way: Before the CRUT is created, the donor transfers the property to an LLC. Then, if the donor later decides to contribute an interest in the CRUT to the charitable remainder organization, a percentage of the LLC is transferred to the charity. This roundabout method could be a way to avoid the self-dealing issue.

Q.5. Might the IRS be concerned if all or part of a life interest is contributed to the charitable remainder organization shortly after the CRUT is created?

A. The IRS has privately ruled that when a CRUT is terminated and the assets are divided between the life beneficiary and the public charity remainder organization based on the then value of their respective interests, the transaction is deemed to be a sale of the beneficiary’s life interest—and he has a zero basis. If the trust was created more than a year before termination, the beneficiary has a long-term capital gain. But how much does the life beneficiary receive? You would think that the amount would be determined by taking into account: (1) the value of the trust assets at the time of the  trust’s termination; (2) the beneficiary’s then age (to his nearest birthday); (3) the IRC Section 7520 rate at the termination date; and (4) the unitrust percentage stated in the CRUT. And that has been the rule for STAN-CRUTs. But in a few letter rulings, the IRS states that if the trust is a NIM-CRUT or NI-CRUT, the Section 7520 rate must be substituted for the stated unitrust percentage when the Section 7520 rate is lower than the stated unitrust percentage. This method greatly reduces the value of the assets that will be received by the beneficiary in a NIM-CRUT’s or NI-CRUT’s early termination.

Query: Might the IRS also apply this low valuation rule on a gift to the charity of a life interest in a NIM-CRUT or NI-CRUT?

Q. 7. Suppose a trust being a NIM-CRUT and the remainder organization being a private foundation results in unfavorable consequences on an early termination of the trust by a division of the assets between the income beneficiary and the remainder organization or a gift of all or part of the life interest. How might these consequences  be avoided at the creation of the trust? What flexibility should be built into a trust at the outset?

A. Don’t draft a plain old NIM-CRUT or NI-CRUT. Instead, draft the NIM-CRUT or NI-CRUT with a flexible FLIP-CRUT provision (a FLEX-FLIP-CRUT). Then if the income recipient wants to contribute his remaining life interest or receive his share of the trust on an early termination, he pulls (squeezes, according to my old drill instructor) the trigger—and voila, we’re dealing with a STAN-CRUT.

How to create a FLEX-FLIP-CRUT.A typical FLIP-CRUT often provides that a NIM-CRUT or NI-CRUT shall flip and become a STAN-CRUT on January 1 of the year following the sale of real property transferred to the trust (a non-marketable asset). And that’s often an appropriate time to flip a NIM-CRUT or NI-CRUT. But instead of doing it that way, fund the trust with the real property and a few shares of non-marketable securities (for example, cookthebooks.com). Make the sale of cookthebooks.com the triggering event. Then if you wish to flip the trust earlier than real property’s sale, on its sale or later than its sale, you can flip at will—by selling the shares in cookthebooks.com.

And how to eliminate the private-foundation-remainder-organization problem: The donor, on creating the trust, retains the right to substitute a public charity for the named private foundation.

As the school master in The History Boys might say: “Foresight and flexibility lads; those are the lessons that I want you to learn.”

Q. 8. Suppose a trust beneficiary who isn't the donor wishes to give away all or part of his remaining life interest—or terminate the trust early and divide the trust assets with the charity (based on their then actuarial interests and the then value of the trust assets). Potential issue?

Or, all the parties might just ignore the spendthrift provision. That’s a bad idea!

And that’s this month’s news from Lake Taxbegone.