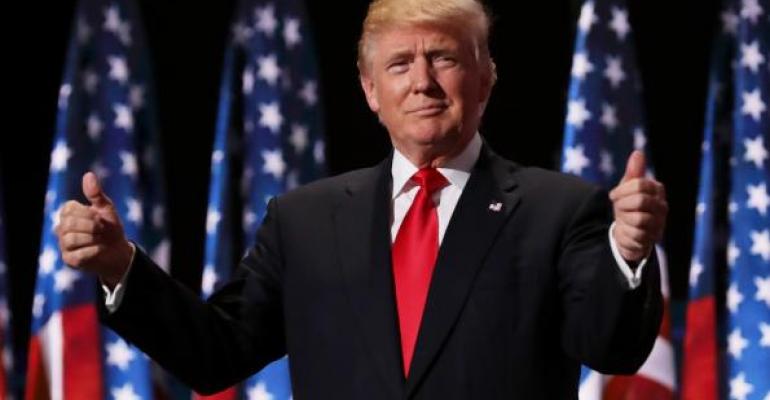 Consider the source here, but Breitbart.com is reporting on a Woodbridge Wealth survey that 83 percent of financial advisors prefer Donald Trump over Hillary Clinton for president. The advisors believe Trump would foster long-term growth and build a stable economy. Twelve percent of advisors surveyed believe neither candidate would improve the economy while only 6 percent of those surveyed believe Clinton is the better choice. The survey also found that financial advisors want the candidates to discuss the DOL's fiduciary rule, Dodd-Frank and Social Security. “Regardless of the election’s outcome, financial advisors who responded to our survey made themselves abundantly clear as to who they believe is best-suited to set the country on a path to economic vitality,” said Bob Shapiro, president and CEO of Woodbridge Group of Companies. “Throughout the survey, we see the same economic themes repeated over and over again; job one for the new administration has to be economic fixes.”

Many Americans employ an investment strategy that's too conservative, hindering their ability to meet retirement goals, says a new Wells Fargo study. Almost 60 percent of investors focus on avoiding loss as opposed to maximizing growth—a common strategy among investors nearing retirement. But the survey found that across all age groups, American investors are just as likely to take an overly risk-averse approach to investing. “It’s important that people allocate their investments in a way that’s appropriate for their age and risk tolerance,” said Joe Ready, head of Wells Fargo Institutional Retirement and Trust. He added, “It’s also important to make informed decisions about investing in a way that allows those with a long runway before retirement to use their biggest asset—time—to accelerate their savings growth potential.”

Envestnet is acquiring yet another data analytics firm. The Chicago-based company announced on Monday plans to acquire Wheelhouse Analytics, a data analytics firm that also provides mobile sales and online education tools for advisors, assets managers and enterprises. Wheelhouse will combine with Yodlee’s capabilities to further improve Envestnet’s ability to provide financial services professionals with data-driven insights. Wheelhouse also has proprietary dashboards to display segmentation analytics, multidimensional benchmarking and practice pattern analyses, which Envestnet plans to integrate into the rest of its offering. Additionally, Envestnet said it would bring Wheelhouse’s deal management and intermediary oversight platform into a centralized data hub to help product manufacturers and wealth management firms with DOL compliance. Terms of the deal were not disclosed.