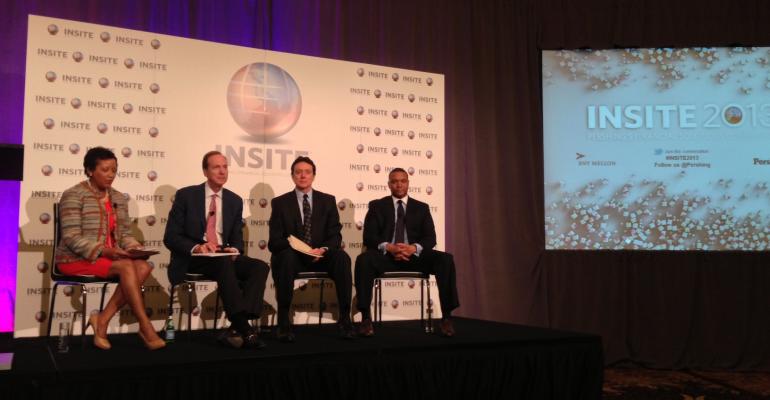 DOL to Stare Down Industry on Fiduciary

Advisors may have to wait a bit longer to see what the Department of Labor’s proposed rule setting a new fiduciary definition under ERISA will look like, but it’s unlikely time will temper the results.

“This is going to be a major problem for the industry,” the Financial Services Institute’s Rob Lewis told attendees of Pershing’s INSITE conference Wednesday. The proposed rule—which many have called a “game-changer”—was expected sometime this July, but assistant secretary for the agency's Employee Benefits Security Administration Phyllis Borzi noted Tuesday in an ERISA Advisory Council that the timeline had been extended by several months.

“This is not one of those trains that you don’t see coming, this train is coming down the track, it’s just a matter of when and based on what we’re hearing, we think it’s going to be September,” Pershing Director Tonia Bottoms said.

Even more concerning, it seems now that Borzi’s previous suggestions that the new proposed rule will include some exemptions to accommodate different business practices may not, in fact, play out. “I just think that from my conversations with the Secretary, she’s pretty headstrong and she wants to do this, she believes she has backing of the White House,” Lewis says. When pressed, he noted it was unlikely that the industry would see a watered-down version of the rule, even as many firms hoped to see exemptions for IRA rollovers.

“She feels so strongly about the conflicts of interest issues that she said she’d rather see a person with $10,000 in an IRA account going to the Internet as a opposed to receiving conflicted advice from an advisor,” Lewis added.

And it’s not just broker-dealers who need to be worried about the impact of a new rule. “For RIAs, they probably have fewer conflicts because of their structure, but they don’t necessarily have zero conflicts,” says attorney Jon Breyfogle of the Groom Law Group. Many advisors who operate as fiduciaries under the Advisor Act do not do so for ERISA purposes, he noted, pointing out potential pitfalls under the proposed DOL regulation, including recommending managers and revenue sharing agreements.

The driving force behind the rule change, as the agency has previously noted is that the ERISA rules were written in 1975 and fail to adequately keep up with today’s marketplace. Additionally, the agency is worried consumers are getting conflicted advice and do not fully understand the differences between suitability and fiduciary duty.

Supporting the agency’s push, a GAO report released in May found that in the 1,000 401(k) plans surveyed, many providers were recommending IRA rollovers for participants without regard to the circumstances specific to that investor. Because of the lack of clarity regarding the revenue sharing and fee arrangements the survey found, the GAO’s report ultimately recommended the DOL to move forward with its new definition of fiduciary.