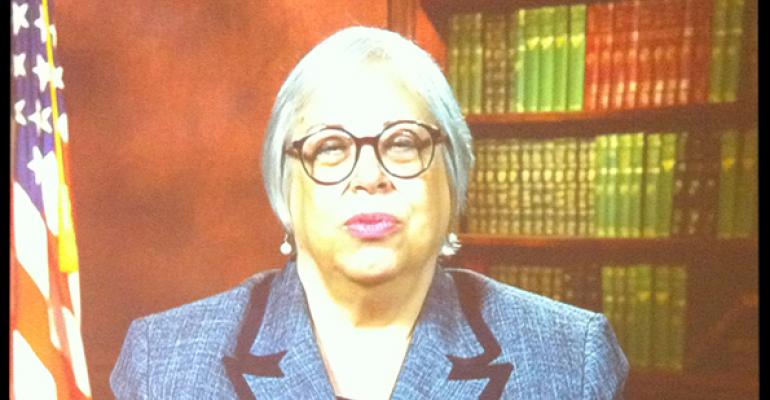 Speaking remotely at the annual conference of the Investment Management Consultants Association, Phyllis Borzi of the DOL strongly suggested that the agency will include some exemptions to its fiduciary rule for certain business practices.

As the Department of Labor works on its re-proposal for the definition of a fiduciary under ERISA, the million dollar question has been whether the rule will include exemptions for certain types of business practices and compensation models. Phyllis Borzi, assistant secretary for the Employee Benefits Security Administration at the DOL, strongly suggested that the agency will, in fact, include some exemptions to accommodate different business practices.

Borzi, who couldn’t make it to IMCA due to the sequestration and budget cuts in Washington, was conferenced in remotely.

She would not elaborate on what exemptions might be included in the proposal, but she did say that the DOL has issued prohibited transaction exemptions in the past. They haven’t decided whether they will be in the form of amendments to existing exemptions or new ones.

But there will likely be certain conditions that advisors have to meet in order to be exempted, such as disclosure, Borzi said. The DOL has been working with people in the industry to find out what conditions might be possible.

While Borzi didn’t provide much detail about what the rule might look like, she said it will include three elements, the first being a regulatory test—an explanation of the problem and regulatory text to fix the problem.

The problem, according to Borzi, is that the ERISA rules, written in 1975, do not keep up with today’s marketplace; they’re written for a completely different time, and the market has changed. And now consumers need advice, but they’re confused by the myriad of people holding themselves out to give advice.

“One of my favorite new sets of names that people call themselves are ‘wealth managers,’” she said. “The problem, of course, is that not everybody is required to have a legal standard of care that requires them to put their clients first.”

The proposal will also include an economic analysis that would be “completely transparent.” The DOL decided to conduct the economic analysis in response to comments on the original proposal, complaining that the agency didn’t do a proper analysis. Borzi made it clear that the cost/benefit analysis would look not just at the costs to the industry, but also at the effects on consumers.

The last element of the rule would be the exemptions, she said.

The DOL has been criticized for not coordinating with the Securities and Exchange Commission, which is also looking at a new fiduciary standard under Dodd-Frank. But Borzi said the DOL will not stand down. The SEC has very different statutes than the DOL. Under the SEC, which regulates securities, it has a disclosure statute, meaning that conflicts of interest can be present if disclosed. But ERISA, which regulates all kinds of investments, flatly prohibits conflicts of interest. “Our worlds aren’t identical.”

That said, the DOL is working with the SEC in a “coordinated” fashion, and Borzi noted, “compliance with one rule won’t put you out of compliance with another.”

As for whether individual retirement account (IRA) rollovers will be covered under the DOL’s rule, “You’ll just have to wait until the movie comes out on this one.”