/sites/all/themes/penton_subtheme_wealthmanagement/images/logos/footer.png
Recent
Recent
New Research: Investing in Seniors Housing Properties—Opportunities and Challenges
Jul 01, 2022
12 Must Reads for the CRE Industry Today (July 1, 2022)
Jun 30, 2022
Reinventing the Advisor Workstation for a Digitized World
Jun 30, 2022
Can the U.S. Supply Chain Withstand New Disruptions?
Jun 30, 2022
Featured
The 10 Best and 10 Worst States in Which to Retire in 2021
Jul 15, 2021
Poll: 15 Classic Books on Investing and the Markets
Apr 03, 2020
Fifteen Must-Listen Business Podcasts for Advisors
Aug 14, 2020
Celebrity Estates: Jay Leno and Planning for Classic Car Collections
Feb 22, 2022
Yield of Dreams
brought to you by 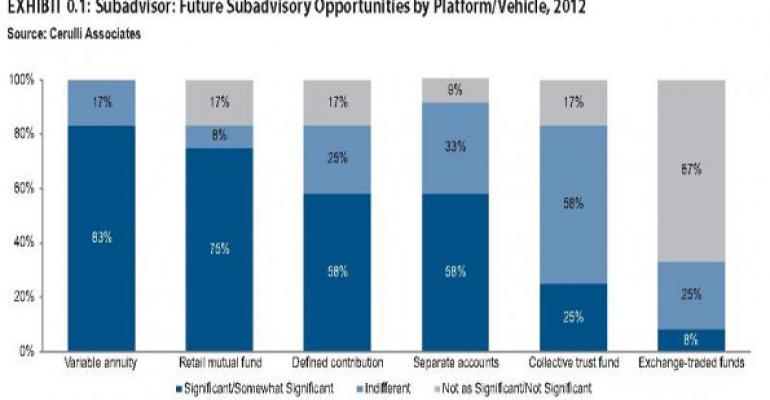 While several insurers have either exited or cut down their variable annuity business, Cerulli Associates expects VAs to be the fastest growing segment for subadvisors in the years ahead. According to Cerulli, VA subadvisor assets are expected to grow to $915 billion by 2014, representing 7.8 percent growth from 2011. Long-term mutual fund subadvisor assets are expected to grow 5.9 percent by 2014, while retail separate account assets should increase 1.7 percent.

The VA subadvisory opportunity is robust for firms with the risk-adjusted performance that insurers require for inclusion within their model portfolios, which, sold in conjunction with living benefit riders, drive the majority of VA business. Despite the de-emphasis of this investment vehicle by notable variable annuity carriers Hartford, ING, Sun Life, and John Hancock, the VA market presents the one of the best growth opportunities for subadvisors hunting for mandates. This enthusiasm for VA subadvisory opportunities resonates with a strong majority of our survey participants, who chose VA subadvisory as the most significant opportunity for new business.

As we wrote in May, fewer players, less attractive guarantees and a glut of complex features make annuities a tougher sell these days for advisors. But many say they’re still the only game in town when it comes to income.

Since the beginning of 2011, three insurance carriers — Sun Life Financial, Genworth Financial and, most recently, The Hartford — have exited the annuity business altogether. In 2010, ING abandoned its annuity business. John Hancock, owned by Canadian-based Manulife Financial, significantly scaled back its annuity business last year, and even MetLife says it expects to sell 35 percent fewer variable annuities in 2012 versus the prior year as it shifts its marketing focus elsewhere. The annuities business is now concentrated in fewer hands, and the leaderboard looks dramatically different than it did in 2007.

My guess is this change in the leaderboard provides more opportunity for boutique players, including subadvisors, to make inroads into the annuity market. 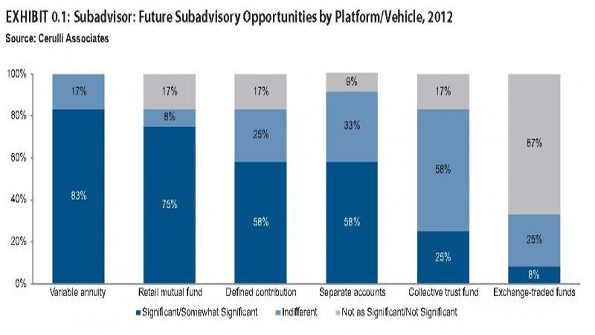