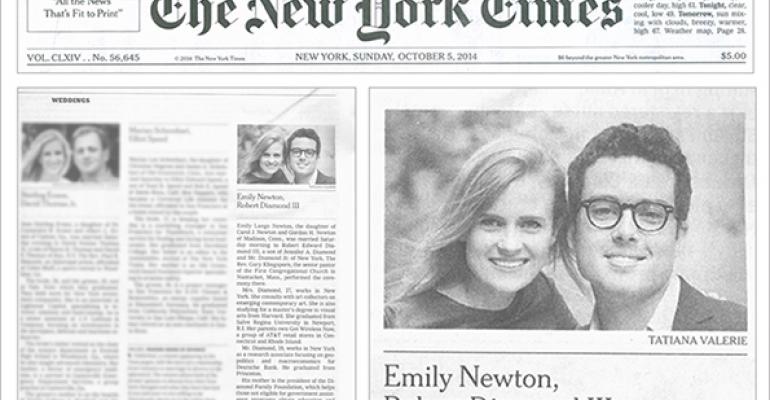 The Death of the Hedge Fund?

Given their poor performance and poor image, many hedge fund managers are backing away from using the term to describe themselves, reports the Wall Street Journal. Since 2007, the number of times hedge funds were mentioned in marriage announcements is down 20 percent, the publication says. What are some common replacements? Alternative asset manager, investment holding company and private partnership are a few terms you might hear instead.

About 40 percent of cell phone owner access social networks from their phones and 28 percent do so on a typical day, according to 2014 data from Pew Research. This trend prompted Hearsay Social to launch new mobile apps for iPhone and Android on Friday, which allows its 100,000 advisors and financial professionals to publish posts to their social networks and manage their social interactions. “The app allows me to capture content more readily and post to my LinkedIn account at a moment's notice,” says Jason Graham, regional marketing director at Penn Mutual.

Convertible bonds are the way to deal with this market volatility, Calamos Investments CEO John Calamos Sr. said on "Squawk on the Street" on CNBC on Friday. He said that the possibility of the Federal Reserve raising interest rates is the reason for the market unpredictability, adding that it is going to be difficult to time when the hike will occur. "When it happens, everyone's going to be surprised," Calamos said.