So, now the federal gub’ment wants to criminalize risk. Yup, apparently, the Justice Department is investigating JP Morgan Chase (Ticker: JPM) for its “whale” trade. (Some whale; it represents about 1% or more of its capital.) 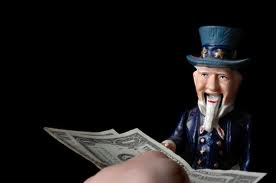 Here is Rochdale Securities financial services analyst Dick Bove’s compelling comments: “On the other side of this debate is JPMorgan Chase. This company’s pretax income in 2011 was $26.7 billion. If the statisticians at SNL Research are correct, this bank generates the highest profit of any bank in the world and it does so by a significant margin. In last year’s Fortune 500 ranking, JPMorgan appeared to be the 5th highest profit generating company in the country. It created more profits than Apple ($553.17/NR) or IBM (IBM/$199.04/NR). It generated more than Wal-Mart (WMT/$59.33/NR) or General Electric (GE/$18.40/NR) or Berkshire Hathaway (BRK.A/$121,425/NR).

“JPMorgan was able to assist the United States government and its taxpayers in two instances in the recent financial crisis by buying legacy Bear Stearns and Washington Mutual. It did not want, and rapidly paid back, the TARP preferreds at a meaningful profit to the government. It is clearly one of the most successful best run companies that the United States has ever seen.