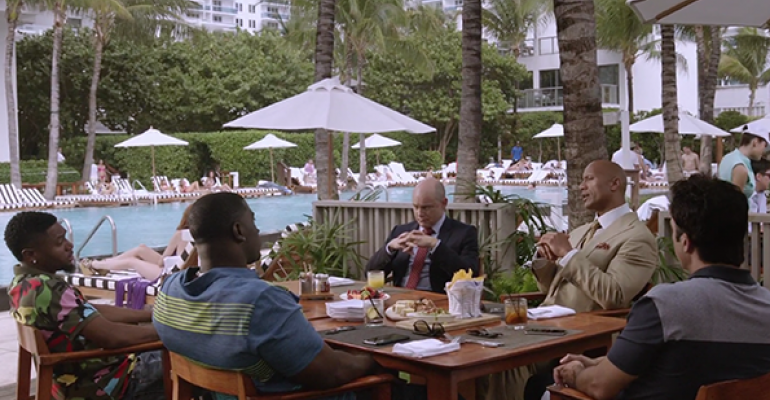 This week’s episode of HBO’s Ballers highlights the dark side of fame—the inevitable shakedowns. And as the show points out, the most dangerous ones are rarely straightforward, so it’s helpful to have a team of professionals around. (Warning, spoilers ahead!)

When erstwhile client Vernon Littelfield (Donovan W. Carter) gets himself in trouble on this week’s episode, he calls Spencer Strassmore (played by Dwayne “The Rock” Johnson) in a panic. Turns out he’s being blackmailed over compromising photos taken while attending Anderson Financial’s corporate event a weeks ago.

“Shakedowns…are an occupational hazard,” Strassmore says. Having been through this type of scheme personally, Strassmore and his Anderson Financial colleague Joe Krutel (Rob Corddry) set out to take care of the situation. Although as Krutel points out, this isn’t a situation that “was on the CPA exam.”

Shakedowns are not an uncommon occurrence for professional athletes, says Noah Croom, legal counsel for Goodwin Sports Management. “The rise in social media has made it more common,” he says, noting that the impact negative publicity can have on a player's contract negotiations or marketability cannot be overstated.

But having a financial advisor so involved in cleaning up a situation like this is probably television magic. A player in trouble would probably call their agent and lawyer. Financial advisors wouldn't have much involvement with that, says Gary Kloppenburg, who is currently serving as an assistant coach for the Indiana Fever, a WNBA team.

Most financial advisors may not have to haggle with shady lawyers threatening to go to the tabloids like Strassmore and Krutel, but dealing with out-of-the-box client situations does come up from time to time, according to Erik D. Averill, a former professional baseball player and an advisor with Scottsdale, Ariz.-based Athlete Wealth Management Group, which works with 125 athletes across the MLB, NFL and NBA.

“We are relied upon for advice and help that definitely falls outside the lines of the traditional financial services model, but nothing to the extreme seen on the show,” Averill says, adding most of the situations his firm has dealt with are family related.

But while the shakedown of Littelfield is fairly straightforward, professional athletes experience a number of more minor, yet no less difficult, shakedowns. Especially when it comes to investment schemes pitched by friends, colleagues and relatives.

“You’re in a position where so many people are going to come at you with a brilliant f**king idea on how to double your cash,” Strassmore tells Victor Cruz in a client meeting, citing a friend and former player who invested badly in a waterpark in North Dakota.

“The bottom line is, no matter if you sign with us or not, never invest in a waterpark,” Strassmore jokes. This is perhaps the most realistic point made in Sunday’s episode—players get approached with deals like this all the time.

“One of the more exotic ideas pitched to one of our MLB players this year was to fund an alligator farm that would sell the alligator skins oversees. It was promising an 18 percent return,” Averill says. “I’m still waiting on the business plan we requested.”

Palash Islam, owner of California-based Synergy Financial Group who works with professionals like Croom, as well as athletes and coaches like Kloppenburg, says he’s seen everything from investments around peanut and almond farms and marijuana stores to section eight housing in Alabama. But he says he never tells clients yes or no. “We simply go through the pros and cons and I mention that they should invest what they are willing to lose in these speculative investments,” he says.

“A water park in South Dakota or a restaurant in Atlanta, the reality is most of the athletes make enough money that it really makes no sense to take risks of that nature,” Croom says. “They have enough money to get very sophisticated investment advice if they seek it out.”