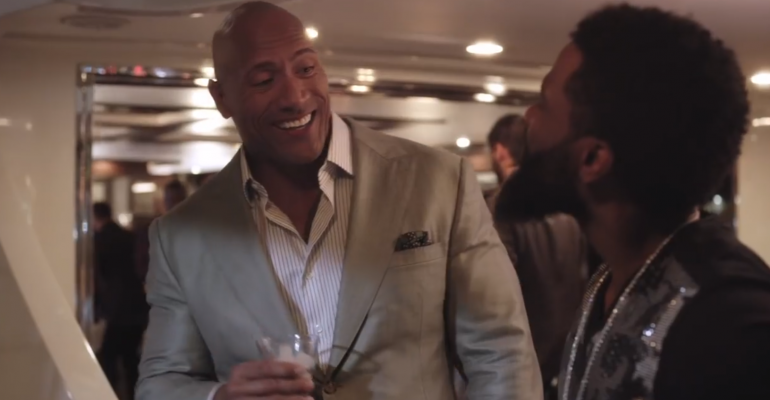 It’s not unusual for a financial services firm to host an event to drum up business and sign clients. But Anderson Financial’s idea of a client event is anything but “strictly corporate.”

“This event is strictly corporate,” Krutel assures his boss, Mr. Anderson, (played by Richard Schiff, who along with Dulé Hill, makes for a mini The West Wing reunion) when asking if the duo can use his yacht for the event. What could possibly go wrong?

“It was pretty realistic from the standpoint of the advisor and their firm putting on big events to bring in and recruit prospects,” says Palash Islam, owner of California-based Synergy Financial Group and an advisor to several professional athletes. There are numerous real-life examples of parties like the one in Sunday’s episode, Islam adds. “At the NBA pre-draft camp, a suit tailor will parade around half dozen girls in mini-skirts around the hotel lobby to drum up business. They are the ‘sales associates,’” Islam says.

But while the general concept was “right on,” Palash says Strassmore’s event was “sensationalized.” The unrealistic aspect? Having advisors hosting these kinds of parties. “I'm sure players go to and are invited to wild parties. But I think it is pure fantasy that it would be hosted by a financial advisement group,” says Gary Kloppenburg, who is currently serving as an assistant coach for the Indiana Fever, a WNBA team.

Yet by the looks of the founder’s yacht, it appears that Mr. Anderson was successful over a long period, says Tom Reynolds, co-founder of CRA Financial and advisor to a number of MLB, NHL and NFL players. Clearly he did not build his business by having wild parties.

“You do not get to Anderson’s level by having a buffoon running your business such as Joe [Krutel],” Reynolds says. “Consuming vast quantities of alcohol and illicit drugs at a firm sponsored event as depicted on the episode is obviously ridiculous and reckless. This was very hard to believe – even for Miami.”

And it’s particularly unreal that once they had the “NFL elite” in the room, Krutel and Strassmore would be too busy living it up with players and shoving clients’ friends into DJ stands to make a more serious business push and educate potential clients about their value proposition.  Having Krutel tell a group of players’ “we don’t want you guys living paycheck to paycheck, nothing saved up for the off season” doesn’t cut it.

Though the incident where Strassmore pushes Vern’s friend Reggie into the DJ stand after the two argue about managing the football star's financial future was overblown, Kloppenburg says it can be a real dilemma for players that suddenly receive a huge contract and feel the pressure to take care of friends and family.

“The fact that Vern’s friend Reggie wants to be in the middle of the relationship and ‘run’ Vern, is right on.  When guys grow up together with nothing, and one hits it, there is an ‘entourage’ that comes up—like a circle of trust,” Islam says. “No one wants to let an outsider in; but if they are truthful, it’s also because it takes from everyone’s slice of the pie.”

“Just last year, an NBA first rounder’s agent demanded $25,000 from our firm for the right to be the new players’ accountant. We passed,” he adds.