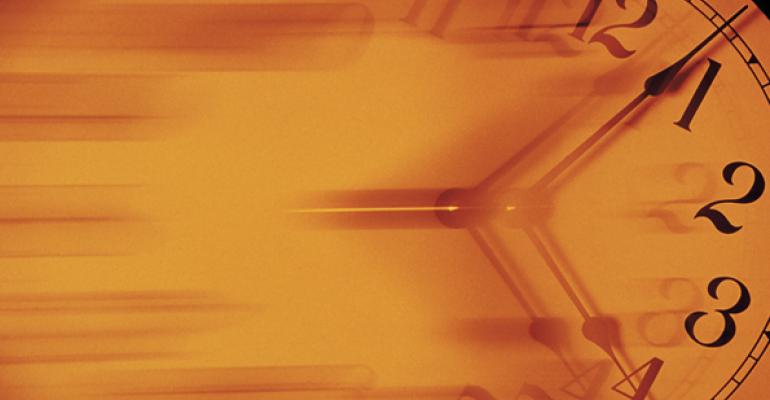 Our long-time Contributing Editor John Aidan Byrne reports in the New York Post a phenomena that you financial advisors have known for sometime: Many more Baby Boomers are finding they have to put off retiring for about 5 years or so. We have reported in these pages (and digitally) that savers haven't been socking enough away and that the Lost Decade hasn't helped them in planning for their retirement. We wrote a few years ago that the death of DB plans and the problems looming in other pension plans, particularly for public service employees, would throw a curve ball in retirement plans. Here is what we wrote in 2008:

"The United States has a severe savings problem, one so hardwired into our culture that it is institutionalized. You've heard that before, perhaps you've even warned your clients about it. The bottom line is that if you are using promised future cash flows from a client's defined-benefit plan in your retirement calculations — employer- or government-sponsored — you had better be careful. Retirement promises will likely be broken — and sooner than you think. In the private sector, more and more DB plans are shutting down or reducing their payouts as future obligations are overwhelming companies' ability to pay. The government itself is also facing some tough times ahead: It is running historic deficits and, recently, the national debt has been growing at a pace never before seen in this nation's history. (And that's saying something.) The promises on the books for future payments from entitlement programs — from Social Security to Medicare — already represent $53 trillion. That works out to about $175,000 per person.

"The trouble is, we haven't got $53 trillion. 'Social Security trust funds are a misnomer, and, in fact, they're an oxymoron,' says Peter G. Peterson, a former secretary of commerce and chairman of the Blackstone Group. 'They shouldn't be trusted and they're not funded.'”

This is John Byrne's article published today in the Post: "Like Humpty Dumpty, many middle-class Americans’ nest eggs are broken, and all the financial planners in the kingdom can’t put them back together.

"That’s the finding of a new study by Bank of America’s Merrill Lynch, which finds that more than ever before, 50- and 60-year-old Americans are putting off retirement as the limp economy wreaks havoc with their golden years.

"This study reveals some shocking findings. More than half of the respondents said they’re planning to retire later than they thought they would 12 months ago. That’s a year-over-year increase of 16 percent from November 2011, according to the Merrill Edge Fall 2012 report.

"And, as has been widely reported, when they do retire, a dwindling number will fund it through company-funded pension plans, compared with today’s more common 401(k) defined-contribution plans. . . ."