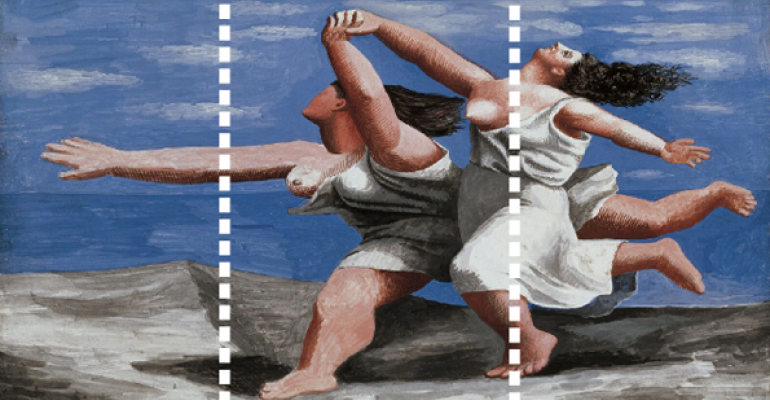 Question. Suppose something is worth $10 million. And suppose that something is divided into ten equal parts. Is each part worth $1 million?

On what does it depend? Among other things: (1) the type of property—for example, marketable securities, closely held securities, real estate or artworks; (2) the reason for the division; (3) agreements between the parties; and (4) who is doing the valuation—the IRS, an appeals court or a willing buyer and seller, both having reasonable knowledge of relevant facts and not being under compulsion to buy or sell.

A fascinating (if you enjoy this kind of stuff) Tax Court case deals with valuing fractional interests of artworks for estate tax purposes. Although charitable gifts aren’t directly involved, the IRS urged the Tax Court to use the IRS’s favorable rulings on the valuation of fractional charitable gifts of artworks as authority for its denying a decedent’s estate a valuation discount.

The Tax Court discusses the weight that courts will give—or rather not give—to the IRS’s pronouncements. After you plow through the Elkins case (coming up soon), I’ll discuss how the Tax Court in an earlier case viewed the IRS’s ignoring its own pronouncements. I tie this in with charitable gifts.

What happened. Summarizing the 30-plus-page Tax Court decision (with 22 footnotes), Elkins, the decedent, had fractional interests in a collection of 64 artworks (including works by Picasso, Moore, Pollock and Cezanne). Elkins and his wife owned fractional interests and so did his children. The fractional interests were created using Grantor Retained Income Trusts (GRITs), an art lease and co-tenancy agreements placing restrictions on the sale of the artworks.

The estate took a 44.75 percent discount in setting the collection’s fair market value—taking into account lack of marketability and control.

The IRS determined that no discount was appropriate and, based on the undiscounted value of the decedent’s interest in the artworks, claimed $9,068,265 in additional estate taxes.

Weight given by Tax Court to expert witnesses in valuation cases:

The IRS plays the IRS’s prior ruling card; but the Tax Court isn’t game:

Finally, [the IRS] argues that a determination that a discount is appropriate in valuing decedent’s fractional interests in the art would be inconsistent with the Commissioner’s longstanding position that fractional interests in art are not discounted for purposes of valuing charitable contributions thereof under section 170. See, for example, Rev. Rul. 58-455, 1958-2 C.B. 100, and Rev. Rul. 57-293, 1957-2 C.B. 153, both of which involve the transfer of either a fractional interest or a remainder interest in a work of art to a section 170(c) organization, and both of which determine the value of the gift without requiring any discount. [Editor’s note: Remainder interests in artworks are no longer deductible.]

The Tax Court reminds the IRS that courts are not bound by the IRS’s pronouncements:

Lastly, we reject [the IRS’s] argument that the Commissioner’s rulings policy (reflected in both revenue rulings and private letter rulings), whereby undiscounted pro rata fair market value deductions are allowed for charitable contributions of fractional interest in art, controls the valuation of decedent’s fractional interest in the art.

[The IRS] cites two revenue rulings in which the taxpayer donated to a section 170(c) organization either all or a portion of the taxpayer’s remainder interest in the art with the taxpayer retaining sole right of possession for life, or an undivided fractional interest in the art resulting in shared possession. Those ruling state that the donor is entitled to a deduction for either the present value of the  remainder  interest  or  for  the  undiscounted  pro rata fair market value of the undivided fractional interest transferred. See Rev. 58-455, supra, Rev. Rul. 57-293, supra. [The IRS] argues that any discount in valuing fractional interests in art for estate tax purposes would conflict impermissibly with the position taken in the rulings.

We are not bound by revenue rulings, and the weight (if any) that we afford them depends upon their persuasiveness and the consistency of the Commissioner’s position over time. Taproot Admin. Servs., Inc. v. Commissioner, 133 T.C. 202 (2009), aff’d, 679 F.3d 1109 (9th Cir. 2012). In the earlier ruling, the Commissioner does not provide a rationale for his failure to discount (other than to present value) the value of the charitable contributions of the remainder or fractional interests in the art, and the later ruling cites only the prior ruling as authority. In neither ruling is there any indication of an impediment to a joint, fair market value sale of the art or, if such an impediment does exist, that the Commissioner took it into account. Moreover, in the light of precedent in both this Court and the Court of Appeals for the Fifth Circuit allowing discounts in valuing a fractional interest in property for Federal estate tax purposes where there are potential impediments to a fair market value sale of the interest (e.g., the possible need for a partition action), the rulings do not persuade us to deny any discount for decedent’s fractional interest in the art.

[The IRS] also cites two cases decided by this Court in which we permitted undiscounted fair market value deductions for charitable contributions of, in one case, undivided fractional interests in an art collection and, in the other case, a collection of “antique stereoscopic” equipment and related material. See Winokur v. Commissioner, 90 T.C. 733 (1988); Mast v. Commissioner, T.C. Memo. 1989-119. In both cases, the sole valuation issue was the undiscounted fair market value of the collection, there being no dispute over the possible application of a pro rata deduction for the donated fractional interest. The parties did not raise the issue of a fractional interest discount, and we did not consider it. Therefore, we don’t view those cases as precedent for denying a valuation discount in this case.

Tax Court holds. “There is no bar, as a matter of law, to an appropriate discount from pro rata fair market value in valuing, for estate tax purposes, decedent’s undivided fractional interests in the art.” But the court reduced the claimed 44.75 percent discount to a 10 percent discount.

First some background, before getting to the issue that I just raised. Every schoolchild knows that capital gains tax is generally avoided on charitable gifts of appreciated property. But the kid also knows that under the anticipatory-assignment-of-income doctrine, the substance-over-form doctrine and the IRS-was-not-born-yesterday doctrine, a donor can be taxable on the capital gain on a subsequent sale by the donee-charity (and not out of the proceeds, but out of his pocket).

The anticipatory-assignment-of-income doctrine was raised by the IRS in Rauenhorst v. Commissioner, 119 T.C. 157 (2002). The facts of that case aren’t necessary for this discussion. Suffice it to say that the Tax Court granted summary judgment for the donors, holding that the IRS couldn’t disavow its own favorable-to-taxpayers 1978 ruling in Rev. Rul. 78-197, 1978-1 CB 83.

Rev. Rul. 78-197 is an important charitable-gift ruling. The IRS didn’t merely acquiesce in a significant Tax Court case, but, contrary to its usual practice, spelled out why it did so:

The Service will treat the proceeds of a redemption of stock under facts similar to those in Palmer as income to the donor only if the donee is legally bound, or can be compelled by the corporation, to surrender the shares for redemption.

In Rauenhorst, the IRS claimed that Rev. Rul. 78-197 wasn’t controlling and gave its arguments—and the Tax Court dismissed them.

The crux of the IRS’s position. Rev. Rul. 78-197 wasn’t controlling in Rauenhorst; furthermore, revenue rulings aren’t binding on the IRS or the courts.

The Tax Court’s bottom line in Rauenhorst. “Rev. Rul. 78-197 … is contrary to [IRS’s] litigation position in this case. Instead of accepting the legal principles articulated in that ruling, [its] counsel contends that the Commissioner is not bound by revenue rulings, and his reliance on Blake v. Commissioner, 697 F.2d at 480-481, demonstrates that he is taking the position in this case that the ruling is incorrect.

The … Treasury’s [own] … regulations, provide:

(d) Revenue Rulings … do not have the force and effect of Treasury Department Regulations (including Treasury decisions), but are published to provide precedents to be used in the disposition of other cases, and may be cited and relied upon for that purpose.  * * *

(e) Taxpayers generally may rely upon Revenue Rulings published in the Bulletin in determining the tax treatment of their own transactions and need not request specific rulings applying the principles of a published Revenue Ruling to the facts of their particular cases.  * * *”

The Tax Court, after noting that similar statements appear in other IRS publications, stated: “Surely, given these statements, taxpayers should be entitled to rely on revenue rulings in structuring their transactions, and they should not be faced with the daunting prospect of the Commissioner’s disavowing his rulings in subsequent litigation.”

Is it cricket for the IRS’s attorneys to take a position contrary to a published revenue ruling? While I haven’t found a Code of Conduct for IRS people, here’s a “commentary” from the IRS Chief Counsel (apparently, in response to Rauenhorst):

And that’s the news from Lake Taxbegone.