/sites/all/themes/penton_subtheme_wealthmanagement/images/logos/footer.png
Recent
Recent
When Clients Get the Pink Slip
May 22, 2020
Reboot Your Work From Home Routine
May 22, 2020
Early Retirement Is Tempting Now. Don’t Do It
May 22, 2020
Digital Metrics Soar At Raymond James, TIAA
May 21, 2020
WealthTech Winners Circle Podcast: TD Ameritrade Bringing the Latest in Innovation
May 21, 2020
Featured
Poll: 15 Classic Books on Investing and the Markets
Apr 03, 2020
FICO Updates and Their Impact on Credit Scores
May 06, 2020
The Top Colleges for Financial Planning
Oct 03, 2019
The 10 Most and 10 Least Valuable College Majors
Aug 28, 2019
Advisor Confidence Index (ACI)
brought to you by 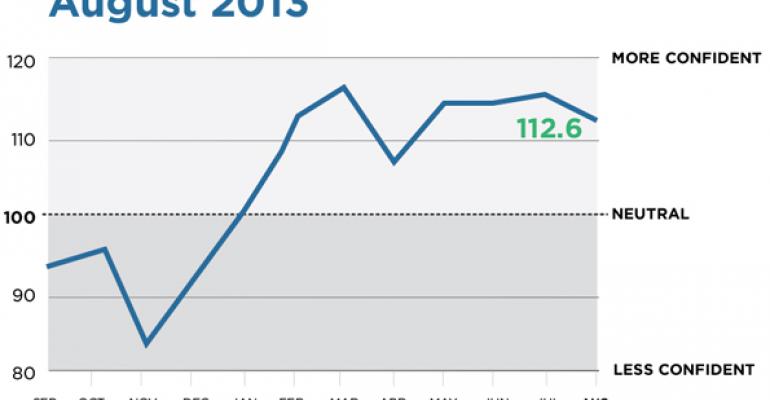 The WealthManagement.com Advisor Confidence Index fell overall in August, as advisors look for a near-term pullback in equity markets.

New York, NY/ August 29, 2013 –Financial advisors’ optimism in the economy and the markets deflated in August, falling almost 3% from July’s reading. Advisors say they are particularly concerned about a near-term correction in equity markets.

The WealthManagement.com Advisor Confidence Index (ACI), a benchmark of financial advisors’ views on both the current and future states of the U.S. economy and the stock market, fell 2.9% in August to 112.62; while still in positive territory, a lower level of optimism suggests advisors feel less confident in the near-term economic prospects. WealthManagement.com is a division of Penton.

Advisor optimism in the near-term future of the stock market fell even further than the broader reading, dropping by 5%. Most advisors who commented suggested the continued monetary policies of the Federal Reserve were giving an artificial boost to equities, and while the economy is showing signs of improvement, the markets have gotten ahead of the fundementals.

“The economy is in a weak recovery, but moving up nonetheless. The stock market has moved ahead of the economic recovery, currently benefitting from some flight from bonds to stocks. I expect some correction in the 5-10% range over the next 3-6 months,” says Robert Cochran, an advisor with PDS Planning in Columbus, Ohio.

Gregory Horn, founder of Persimmon Capital in Blue Bell, PA., suggests investors look beyond U.S. markets for returns. “With retail investors now piling into equities at record levels and the Fed considering when to begin tapering debt purchases, it’s time to reduce exposure to stocks in spite of the faint glimmer in the US economy. Equity capital may be better deployed at or near the bottom of the cycle in Europe on a selective basis.”

Most advisors suggest the stock market has been artificially inflated thanks to the Federal Reserve’s bond buying program. “The U.S. economy, and to a greater extent, the U.S. stock markets are being artificially boosted by massive and historic doses of monetary intervention. I have yet to find anyone, anywhere who believes the equity markets would be at the current high levels were it not for this artificial influence. Caution, prudence and intelligent investing should be the focus in this environment,” says Kenneth W. Katzen of Post Oak Investment Management in Houston, Tex.

Not all advisors are reducing their confidence. “I believe the US economy and the US stock market is one the verge of a long period of sustained economic and capital market growth. Virtually every form of speculative excess has been cleared from the capital markets in the last 13 years, with the possible exception of the Treasury market,” says Brian Gilmartin of Trinity Asset Management in Chicago.

While advisor views on the near-term state of the economy remained relatively unchanged from July, confidence in the longer term prospects for the economy also took a hit, falling 2.5% over the month of August. 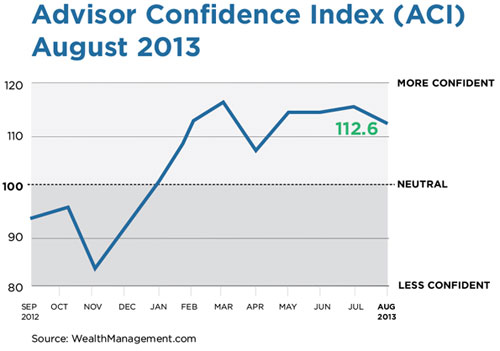 About Advisor Confidence Index’s Methodology
The Advisor Confidence Indexis a benchmark that gauges advisors’ views on the economy. The ACI captures the views of a panel of 130 financial advisors, all of who agreed to respond to the survey. The survey asks four questions – an advisor’s view on the economy, the economy in six months, the economy in twelve months and the stock market – on a scale from most pessimistic to most optimistic. The cumulative average is calculated for each question and then added for the overall benchmark.