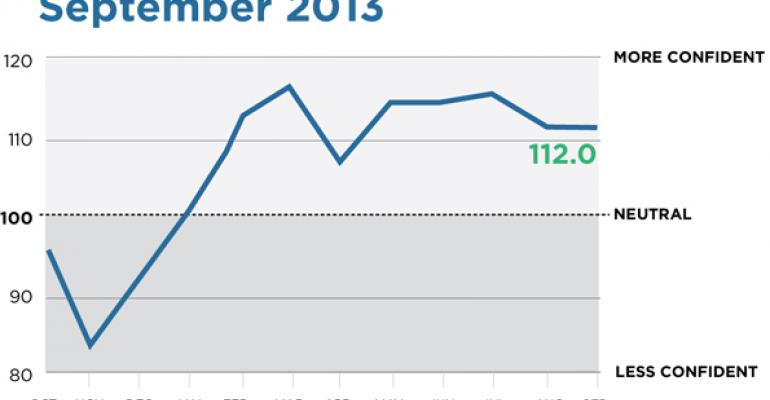 Advisors’ view of the current economy—and the stock market—has held steady over the past month, even as standoffs in Syria, and in the halls of the Federal Government, threatened the markets.

New York, NY/ October 2, 2013 –Financial advisors remained as optimistic over the current and future prospects of the economy and the stock market as they were last month, despite increasing rancor from Republican lawmakers over the prospect of funding the federal government’s new healthcare mandates and a budget standoff that has led to the shut down of unessential federal offices.

The WealthManagement.com Advisor Confidence Index (ACI), a benchmark of financial advisors’ views on both the current economy and the prospects for the markets over the next six and twelve months, fell a mere .58 percent during the month, finishing at 111.96. A reading over 100 indicates advisor sentiment is in optimistic territory.

The confidence level is flat despite recent market-moving news: The Syrian conflict, the Federal Reserve’s surprise decision to not begin tapering its bond purchasing program to stimulate the economy, and the budget debate that has gridlocked Washington D.C. Though virtually even with last month’s reading, the index is down four percent from the year-to-date high point of 116.63 reaching in March.

“The easy money has probably been made, but P/E ratios are still relatively low. I expect high single digit returns over the next 12 but lots of volatility,” says Diane A. Ouellette of Gold Canyon Financial Planning in Gold Canyon, Arizona.

Dr. Gary J. Harloff of Harloff Capital Management in Westlake Ohio agrees. “The U.S. economy is growing as is investment in plants and equipment. As bond interest rates are reset due to return to normalcy, the sidelined corporate and individual cash will reengage in the equity markets. The U.S. equity markets should grow by 12% in the next 12 months.”

Some advisors fear the budget standoff over Obamacare, which led to the closure of the federal government early in October, will put downward pressure on the markets. “

Others suspect that the Fed’s decision to continue its bond purchase program unabated, when many had suspected it would announce the beginning of an end to the stimulus, will continue to give a false lift to markets, especially now that Lawrence Summers, a front-runner to chair the Federal Reserve who was largely seen as being more prone to pull the plug on the program, has bowed out of the running.

“It’s all about the Fed! Low inflation, slow economic growth, and unemployment at 7.3%, the Fed will not stop printing money! We are addicted, at least for the next several months. With Larry Summers out of the picture the money press will be working overtime,” says Douglas Stone of SeaCrest Wealth Management in Medford, Ore., and the host of the local radio program Real Money with Doug Stone.

“Frankly I think the Fed understands the current balance sheet is unmanageable and is looking for any reason to taper. The problem is the economy can't survive without it. The market has all of the good news priced into it already; anything could make it pull back, especially if the Fed isn't there to feed it,” says Paul Spitzer of Advanced Practice Advisors in Del Mar, Calif.

Many advisors point to the relative financial health of most corporations as a reason for continued optimism. “Corporations and investor crave normalcy. Once the economy starts breathing on its own again, both corporate and investor cash will return to the economy, boosting growth and the stock market,” says Jon Foster, President & CEO Angeles Wealth Management in Santa Monica, Calif.

“We also anticipate continued pressure on corporations to use their cash stockpiles for the benefit of shareholders. This can be done through acquisitions, dividends or share buybacks. In large, we see the US economy benefiting on the back of the weaker emerging markets,” says Arthur C. Salzer of Northland Wealth Management in Toronto. 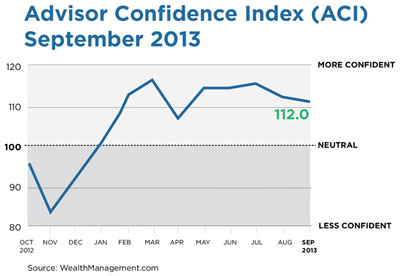 About Advisor Confidence Index’s Methodology
The Advisor Confidence Index is a benchmark that gauges advisors’ views on the economy. The ACI captures the views of a panel of 130 financial advisors, all of who agreed to respond to the survey. The survey asks four questions – an advisor’s view on the economy, the economy in six months, the economy in twelve months and the stock market – on a scale from most pessimistic to most optimistic. The cumulative average is calculated for each question and then added for the overall benchmark.