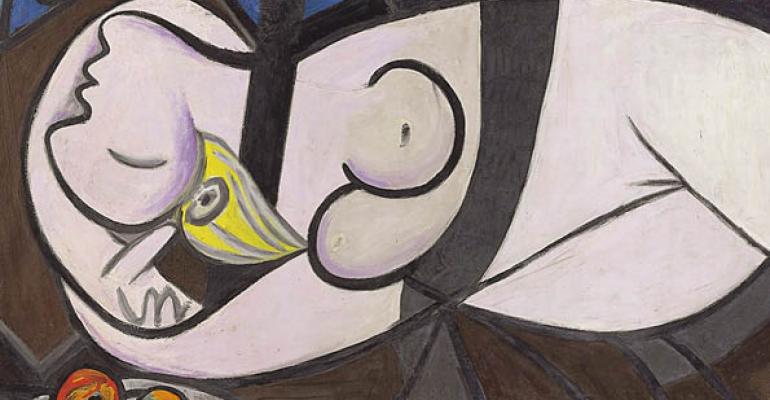 The ups and downs of this marketing strategy&nbsp;

Estate-planning professionals may need to establish an appropriate holding and/or liquidation strategy for estates that include significant assets in art and antiquities. To accomplish this goal, they must be aware that the dealer and auction house may use guarantees as a marketing strategy to sell a piece in question. This strategy has grown more popular over the past few years, as the art market has become more competitive. The use of guarantees makes the decision of whether to hold, sell or donate art more challenging for the owner.

The year 2015 was a tumultuous one for the art industry. At the beginning of 2015, the CEOs of both Christie’s and Sotheby’s stepped down. These auction houses had a combined 42 percent share of the previous year’s sales worldwide, so this change in leadership suggests that things in the art auction world weren’t going well. The fact that both Sotheby’s and Christie’s saw commission margins continually decline since 2011 may have led to the CEO resignations, which were followed by Sotheby’s increases in fees, affecting the hammer price amounts.

Margins are thin because competition is squeezing the traditional way auction houses make money: charging sellers and buyers sizeable commissions. To acquire the most valuable works for sale in the highest priced markets, Contemporary, Modern and Impressionist Art, the houses have been conceding much of their income to the sellers as a lure to do business with them instead of their competitors. Amid this aggressive jostling, the guarantee has grown more popular as a marketing strategy.

With the profit in art sales moving downward, this growth in the use of guarantees may be a result of a market weakness. Last May, evening sales of Contemporary and Modern Art at Christie’s, Sotheby’s and Phillips netted a total of $1.8 billion, including fees. Six months later, in November 2015, the total for these events dropped about 33 percent, to $1.2 billion.1

A guarantee is designed to entice owners to sell their major works of art by having auction houses offer them a guaranteed minimum price. The house and the seller negotiate a split above the guaranteed amount if the work sells for more. If the highest bid is for less than the guarantee, the house makes up the difference to the seller and owns the work of art. The auction house must “then sell the artwork, which it now owns, in a private secondary market where buyers regard the property as ‘damaged goods.’”2 In 2008, Christie’s and Sotheby’s had to pay out at least $200 million on works for which they’d guaranteed a minimum price but which failed to sell.3

A guarantee gives the seller the confidence to consign a work. Rarely do smaller houses and auction galleries use guarantees. As per an anonymous dealer, “The risks are not worth the rewards in under $10 million properties.”

In 2015, Sotheby’s pledged to cover minimum prices on works that made up 43 percent of the $422 million in revenue at its November 2015 Impressionist and Modern Art sale, typically one of its highest grossing auctions of the year. By the same token, Christie’s, at its Postwar and Contemporary Art sale in November 2015, directly guaranteed 23 lots that accounted for 44 percent of the sale’s $853 million in revenue.4

But, it’s not clear that guarantees are working to increase the prices or number of pieces of artwork sold at auction. For example, in Sotheby’s sale of the Taubman tranche (guaranteed at $515 million), a number of works failed to find buyers, which left a $77.2 million gap between achieved sales and the total guarantee, with one remaining “Dedicated Sale” and hundreds of pieces to be placed in “various owner’s sales” during the remainder of the year. At year’s end, Sotheby’s market price fell more than 40 percent and stabilized at $25.76 per share.

Some have criticized this arrangement. Although an auction requires two bidders, a third-party guarantee can lead to a private transaction in which the guarantor is the only bidder. The auction is no longer necessarily a free contest in which a potential buyer fights off insatiable competitors wanting to acquire the work. Most auctioneers and dealers agree that instead of using a third-party guarantee, sellers and auction houses can achieve the best results for any work of art by offering the lot with a low estimate that attracts potential buyers who are likely to drive the price higher through active and extended bidding. Record prices come when exceptional works are offered this way. But, this type of sale involves a great deal of risk. There’s always the chance bidders won’t show up, and the lot will fail or sell low. As with any business, marketing needs to find a “sweet spot” between risk exposure and profit.

When advising your client on selling art with a guaranteed minimum price, it’s important to consider:

1. The appropriate time to put the art on sale with a guarantee. The timing will depend on how the art market is doing. Sellers will want to have a guarantee when the market isn’t doing well to ensure that they’ll get a good price, but the auction houses have the opposite view. They may not want to guarantee a price if they’re not sure that the art is going to sell. So, this may involve some negotiation. “If the art market does cool and become more selective, in 2016 it will be more difficult for auction houses to make as many guarantees as they have in 2014 and 2015,” notes Michael Plummer, principal of Artvest, “because it becomes a much riskier bet on their part to find the right price level in a market that is moving sideways rather than mostly up.”5

2. How novel and notable is the piece? The more rare and different the piece, the more likely the guarantee will be of value to the seller, who wants the assurance of not getting less than the best price possible for an important piece. The seller will also be in the bargaining seat, because if the auction house refuses the guarantee, the seller will be able to take the artwork to a different auction house and get a guarantee there.

3. Did the seller overpay? Many sellers who’ve overpaid for a piece want to get a guarantee when they sell it, so as to either create a profit or not take a large loss.

4. Who will value the piece to justify an appropriate guarantee? A dedicated dealer who has a specific and  recognized body of knowledge and authentication experience with that particular artist or genre might be a better choice than an art appraiser.

Even though the auction house is required to disclose the guarantee’s existence to the potential buyers,6 only the seller, not the potential buyers, knows the amount of the guarantee. This knowledge gives the seller an advantage because the seller has information that the buyer doesn’t, creating an asymmetric buy/sell relationship. George Akerlof, who won the Nobel Prize for economics in 2001 for his research in asymmetric information, finds little to like about secrecy, or “information asymmetry,” and called the buying and selling of art “a rather open market.” But, for those unaware of available information and where to obtain reliable advice, the art market may be “bad capitalism,” he said. “Capitalism is great at producing what people want. However, many buyers may not know what they want or are willing to pay for something. If buyers are willing to pay more than a picture is worth, then capitalism will create institutions that take advantage of them.”7

Practitioners advising donors or buyers of guaranteed art should keep in mind that the price paid may not be considered an objective fair market value (FMV) when it comes time for the donors or buyers to donate that art or distribute it in their estate. FMV is the price that would be agreed on between a willing buyer and a willing seller, with neither being required to act and both having reasonable knowledge of the relevant facts. They can’t rely on what they paid for the artwork to determine the value. Only an appraiser will be able to determine the value at that particular moment for estate-planning purposes.

As an example, in 2010, Christie’s sold Picasso’s “Nude, Green Leaves and Bust,” at full sale price for $106.48 million, the highest price at auction up to that time. Spectacular as it may have seemed, this figure wasn’t entirely unexpected as the remarkable price was sponsored by a third-party guarantee. So, this price doesn’t reflect the value of the art for estate-planning purposes; the value for estate-planning purposes is most likely lower than the sale price.

Such choreographed auctions are effective theater that can create the impression of a flourishing market. When extreme prices, either high or low, for a particular artist are reached through these machinations, it’s reasonable to be concerned as to whether the sale is really an indication of a true market value.

6. Lee Rosenbaum, “Cherchez ‘Les Femmes’: Mysterious Role of ‘Party with a Financial Interest’ in the $179.37-Million Picasso,” CultureGrrl, (June 15, 2015): “Christie’s spokesperson stated that its back-of-catalogue notices and explanations ‘correlate to New York City Administrative Code, which requires an auction house to notify the public if the auction house has guaranteed a lot offered at our auction …. While not required by the law, we voluntarily provide notice whenever a party that may benefit financially from the sale of a lot may be bidding.’”