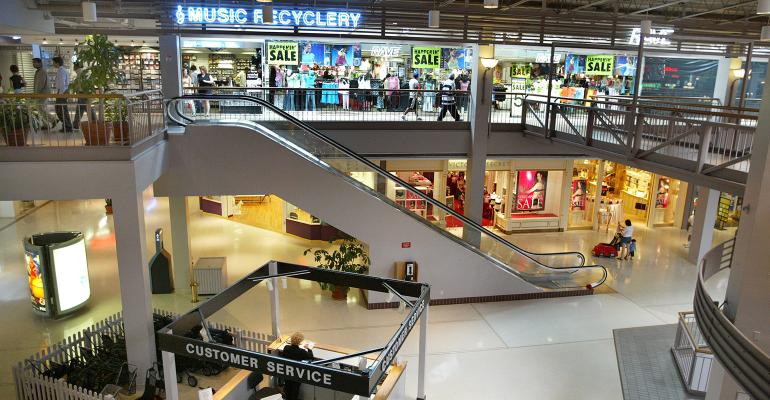 Wall Street Has Found Its Next Big Short in U.S. Credit Market

A small but growing group of firms are positioning to profit from a collapse of shopping malls, similar to the housing crisis.

By Rachel Evans and Matt Scully

(Bloomberg) --Wall Street speculators are zeroing in on the next U.S. credit crisis: the mall.

It’s no secret many mall complexes have been struggling for years as Americans do more of their shopping online. But now, they’re catching the eye of hedge-fund types who think some may soon buckle under their debts, much the way many homeowners did nearly a decade ago.

Like the run-up to the housing debacle, a small but growing group of firms are positioning to profit from a collapse that could spur a wave of defaults. Their target: securities backed not by subprime mortgages, but by loans taken out by beleaguered mall and shopping center operators. With bad news piling up for anchor chains like Macy’s and J.C. Penney, bearish bets against commercial mortgage-backed securities are growing.

In recent weeks, firms such as Alder Hill Management -- an outfit started by protégés of hedge-fund billionaire David Tepper -- have ramped up wagers against the bonds, which have held up far better than the shares of beaten-down retailers. By one measure, short positions on two of the riskiest slices of CMBS surged to $5.3 billion last month -- a 50 percent jump from a year ago.

“Loss severities on mall loans have been meaningfully higher than other areas,” said Michael Yannell, the head of research at Gapstow Capital Partners, which invests in hedge funds that specialize in structured credit.

Nobody is suggesting there’s a bubble brewing in retail-backed mortgages that is anywhere as big as subprime home loans, or that the scope of the potential fallout is comparable. After all, the bearish bets are just a tiny fraction of the $365 billion CMBS market. And there’s also no guarantee the positions, which can be costly to maintain, will pay off any time soon. Many malls may continue to limp along, earning just enough from tenants to pay their loans.

But more and more, bears are convinced the inevitable death of retail will lead to big losses as defaults start piling up.

The trade itself is similar to those that Michael Burry and Steve Eisman made against the housing market before the financial crisis, made famous by the book and movie “The Big Short.” Often called credit protection, buyers of the contracts are paid for CMBS losses that occur when malls and shopping centers fall behind on their loans. In return, they pay monthly premiums to the seller (usually a bank) as long as they hold the position.

This year, traders bought a net $985 million contracts that target the two riskiest types of CMBS, according to the Depository Trust & Clearing Corp. That’s more than five times the purchases in the prior three months.

Sold in 2012, the mortgage bonds have a higher concentration of loans to regional malls and shopping centers than similar securities issued since the financial crisis. And because of the way CMBS are structured, the BBB- and BB rated notes are the first to suffer losses when underlying loans go belly up.

“These malls are dying, and we see very limited prospect of a turnaround in performance,” according to a January report from Alder Hill, which began shorting the securities. “We expect 2017 to be a tipping point.”

Cracks have started to appear. Prices on the BBB- pool of CMBS have slumped from roughly 96 cents on the dollar in late January to 87.08 cents last week, index data compiled by Markit show.

That’s still far too high, according to Alder Hill. Many of the malls are anchored by the same struggling tenants, like Sears, J.C. Penney and Macy’s, and large-scale closures could be “disastrous” for the mortgage-backed securities. In the worst-case scenario, the BBB- tranche could incur losses of as much as 50 percent, while the BB portion might lose 70 percent.

Alder Hill isn’t alone. Deutsche Bank, which famously bet against residential mortgage bonds in the run-up to the crisis, recommended buying credit protection on the BBB- tranche last month. So did Morgan Stanley.

There’s good reason to be pessimistic. After retailers had one of the worst Christmas-shopping seasons in memory, J.C. Penney said in February it plans to shutter up to 140 stores. That echoed Macy’s decision last year to close some 100 outlets and Sears’s move to shut about 150 locations. Delinquencies on retail loans have risen to 6.5 percent, a percentage point higher than CMBS as a whole, according to Wells Fargo.

“The short feels crowded to us,” said Matthew Weinstein, principal at Axonic Capital, a hedge fund that specializes in structured products. “If these defaults start happening soon, the short will work, but if the defaults do not occur quickly, the first guy out could drive the market meaningfully higher.”

Even though TCW Group says CMBS sold in 2012 and 2013 might fall as low as 20 cents on the dollar, the firm isn’t betting against them because it’s hard to know when the wagers might pay off. Plus, the contracts aren’t cheap. It costs about 3 percent a year to short BBB- rated securities and 5 percent to bet against BB notes, plus an upfront fee to put on the trade.

Consequently, it’s “more speculative than it is the next big short,” according to Sorin Capital Management’s Tom Digan.

Whatever the case, here’s what the endgame might look like. About two hours north of Manhattan, in Kingston, New York, stands the Hudson Valley Mall. It used to house J.C. Penney and Macy’s. But both then left, gutting the complex. In January, the mall was sold for less than 20 percent of the original $50 million loan. Mortgage-bond holders exposed to the loan were partly wiped out.

“When a mall starts to falter, the end result is typically binary in nature,” said Matt Tortorello, a senior analyst at Kroll Bond Rating Agency. “It’s either the mall is going to survive or it’s going take a substantial loss.”