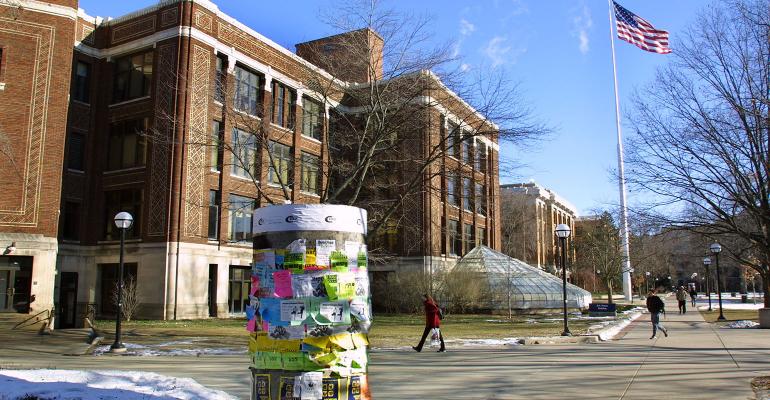 University of Michigan Endowment Banks on Funds That Make Loans

Michigan, the 10th largest U.S. college endowment, had investments with about 250 managers as of June 30

(Bloomberg) --The University of Michigan is betting its endowment can make money on loans to small businesses from Barcelona to Beijing.

The endowment, valued at $10.5 billion as of Dec. 31, has added more managers who specialize in lending -- through private credit, distressed and other forms of debt -- according to annual reports and other public documents.

The strategy accounted for about 30 percent of new managers the endowment invested with in the year through June 30. The board of regents approved commitments of about $400 million to these managers.

Endowments, pensions and other institutional investors are looking for yield at a time of low-return expectations. A quarter of private-debt investors in a recent survey by research firm Preqin Ltd. said their portfolios outperformed expectations last year and a majority said they plan to increase allocations in 2017.

Private credit is backed mostly by non-bank financial firms looking to fill a void left by banks that cut back on loans to hold more capital under Dodd-Frank provisions.

“Where regulations have caused a bit of a gap, they’re filling the gap,” said Bill Bonawitz, director of municipal research at PNC Capital Advisors, which manages about $7 billion in municipal assets.

Michigan’s endowment didn’t disclose fees charged for these commitments, the length of the investments or rates of returns. Rick Fitzgerald, a spokesman for the school, declined to provide additional information.

Michigan, the 10th largest U.S. college endowment, had investments with about 250 managers as of June 30, and the school has invested in multiple funds with some of them. The fund also isn’t a new investor in credit strategy -- about 10 of its existing managers’ investment approaches use mortgage strategies, for example.

“This area has emerged as the supply and demand dynamic has changed in that marketplace, thus providing investors with a more attractive return relative to the risks assumed,” said Ken Shimberg, who oversees investments for endowments and foundations at Mercer Investments Inc. and formerly worked at Brown University’s endowment.

Investments in Michigan’s endowment declined 1.4 percent for the year ended June. The fund has been led by chief investment officer L. Erik Lundberg since 1999.

Michigan’s board of regents approved at least one additional commitment to similar lending strategies in fiscal 2016 that isn’t listed in the annual report of current investments. The fund also received approval from the board to add more managers since June 30, including as much as $70 million to a pair of Asia credit funds founded by executives who ran Lehman Brothers’ Asia special situations group.

Michigan invested with nine credit-related managers in the year ended June 30, including Black Toro Capital Fund II, to which the school committed about $53 million. The fund lends to new, small or financially distressed clients in Spain.

Abax Global Capital makes loans to small- and medium-sized enterprises that are based in China or have a significant Chinese connection. The school committed $40 million to its fund.

The school also committed $50 million to Emet Capital Management for its New York-based fund that invests in distressed municipal bonds collateralized by student and senior housing.

The Trump administration has said it plans to loosen financial services regulations, which could impact this pocket of investments.

“If the president continues on his path of deregulation, banks will be back lending to lower- and middle-market companies in the near future, which could constrain the amount of potential opportunities,” for these funds, said David Fann, chief executive officer of TorreyCove Capital Partners, which advises institutional investors on alternative assets.

Of the about 30 of Michigan’s new managers in fiscal 2016, half were in absolute return, which includes hedge funds. The endowment also increased the number of managers in its energy strategy.

At least seven managers, mostly from hedge funds, who were listed in the 2015 report don’t appear the following year. These include value investor Grantham, Mayo, Van Otterloo & Co., and Highclere International Investors.