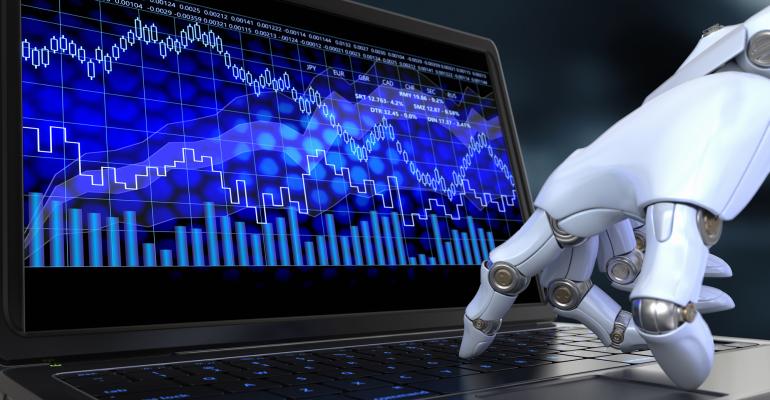 Rise of Robots: Inside the World's Fastest Growing Hedge Funds

Faster computers and better data has enabled asset managers to automate skills that once were limited to market legends.

(Bloomberg) --Believe the hype. Quants have never been more popular.

After doubling over the past decade, assets run by so-called systematic funds have hit a record $500 billion this year, according to estimates from Barclays Plc.

In some ways, their meteoric rise is due to the same technological advances that are disrupting most industries. Faster computers and better data has enabled asset managers to  automate skills that once were limited to market legends.

The diversity of quant strategies, however, makes it hard to generalize about the group. Categories include factor investing, risk parity and managed futures -- not to mention secretive black-box funds, like Renaissance Technologies LLC. Even fundamental traders now arm themselves with quantitative techniques, accounting for $55 billion of systematic assets, according to Barclays.

One thing can be said for sure: funds using automated investing processes are the fastest growing segment of the hedge fund universe.

“Fundamentally driven managers have historically captured the focus, the flows and the glory,” wrote the Barclays team led by Louis Molinari, global head of capital solutions, in a note to investors Friday. “But in the last few years, a resurgence of interest in the space has developed from both managers and investors.”

Here’s a look at how the quant industry has grown over the past few years. Narrowing it down, equity quants typically use characteristics shown to deliver outsized returns, like low volatility or low cost. These funds were especially hard hit following the so-called quant quake of 2007, when hidden market dislocations caused a chain reaction of selling among program funds. They finally exceeded their pre-quant quake level last year, reaching a record $152 billion under management, according to Barclays.

The most popular type of quant hedge fund strategy, managed futures funds, aim to capture broad market trends across asset classes and trade futures to do so. They oversee nearly $200 billion, data from the British bank show. Within the equity cohort, it’s all about diversification. For the first time, investors put the most money behind quant managers trading at least 500 securities, data compiled by Sanford C. Bernstein & Co. show. At 32 percent, their portion of total systematic equity assets towers over the 1.1 percent managed by funds with fewer than 40 securities. As somewhat anemic returns seep through the entire hedge fund industry, impressive performances from a select few quants have captured investor attention. There’s Quantitative Investment Management, whose $1.2 billion equity fund returned 55 percent this year through May, or Renaissance Technologies’s equity fund, which gained 13.7 percent over the same period, compared with a 5.3 percent rise in the S&P 500 Index.

But performance for the average quant fund hasn’t been so outsized. The 1,070 quants reporting to eVestment have cumulatively underperformed their benchmark by about 1 percent since March 2016 and are flat this year.

That said, the returns are all different depending on the time horizon, asset class and general strategy. For example, fast acting equity quants with mean reversion strategies struggled last month, according to Marko Kolanovic, global head of quantitative and derivatives strategy at JPMorgan Chase & Co., because they made unsuccessful bets that the gap between value and growth would revert.

Low volatility among asset classes has made it difficult for quant managers to eke out returns. One remedy? Leverage, which is raising paranoia among market watchers worried about another quant quake. But the market has a ways to go to get back to that era.

At the end of 2016, leverage used by equity quants was about half of that leading up to the crash in 2007, data compiled by Barclays show. Evidence does suggest that leverage may be ramping up again this year, however, with the gross equity exposure of quant funds sitting near all-time highs.

Though critics say smart beta funds are clumsy at capturing the risk premia used by quants, their lower cost has made them popular, weighing on the hedge funds community. More than a third of quant funds in a recent Bernstein survey said they have reduced fees this past year.

For some, fee pressure means turning to scalable quant strategies over expensive stock pickers. Take BlackRock Inc., the largest issuer of ETFs, which earlier this year fired more than 30 people in its active-equities group and moved $6 billion into quant funds. The firm is now spending about $1 billion on technology and data to power their quants, Gary Shedlin, the asset manager’s chief financial officer, said during the Morgan Stanley Financials conference last week.

“You obviously saw some of our repositioning of our active equity business that is going to push what I would call more commoditized product for which you can no longer charge a high fee,” Shedlin said at the conference. “This is a real game. This is not for the faint of heart.”