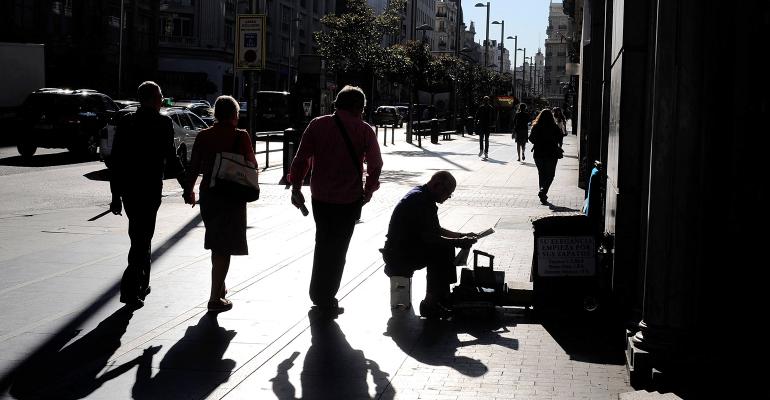 Remove the Punchbowl Before Markets Get Crazier

There's a great big pile of evidence that financial markets have reached the speculative mania phase.

(Bloomberg View) --Everyone knows that when the shoeshine boy gives you stock tips, it is time to grab the canned goods and head for the hills. It happened to me in 2000 at the height of the dot-com bubble. A San Francisco cab driver gave me advice on trading options. I’m sure most people have had similar experiences in the current bull market. One of my subscribers says he was upbraided by a burlesque dancer (don’t ask) for not owning Bitcoin.

There is plenty of goofiness to go around. You may have heard that Kodak, after missing out on digital photography, is attempting to recover with a blockchain product and, of course, an ICO. A Hooters franchisee started its own cryptocurrency rewards program. Long Island Iced Tea became Long Blockchain and the stock soared five-fold in a day.

This is the type of stuff we saw in 1999, when stocks would skyrocket after companies added “dot-com” to their names. But there are even bigger, more sinister distortions today. A huge run-up in the price of Ripple, the cryptocurrency that is supposed to facilitate financial transfers, left one of its founders sitting on a fortune that made him one of the richest five people in the world.

My definition of a bubble is when people make money out of all proportion to their intelligence or work ethic, and it seems to apply here.

Of course, no discussion of cryptocurrencies could be complete without Dogecoin, the token that was launched as a joke but has attained a $2 billion valuation. That’s only slightly less silly than the virtual cats, the “Cryptokitties” that people are buying with Ethereum to the tune of hundreds of thousands of dollars.

Of course, there’s plenty of speculation to go around in the stock market, where the Intercontinental Exchange listed futures on FANG stocks, because we apparently need more leverage on Facebook, Amazon.com, Netflix and Google-parent Alphabet Inc. than Regulation T margins allows on individual shares. The exchange-traded fund world is a bit like ice skating, where everyone was satisfied with triple-leveraged ETFs for years, but now quadruple-leveraged ETFs have appeared on the scene. Speaking of ETFs, the industry is meeting surging demand for marijuana stocks by offering a junior marijuana growers ETF, in case you needed a little more volatility than “large-cap” marijuana stocks provide.

While we’re on volatility, you may have heard about the Home Depot logistics manager who turned his side job shorting the VIX into running a $100-million-plus hedge fund. That strategy, of course, depends on volatility staying low, which anyone above the age of 30 will tell you is probably not sustainable.

Some people don’t like to trade by anecdote, and you could certainly dismiss one or two of these anecdotes in isolation, but taken together, there is a great big pile of evidence that financial markets have reached the speculative mania phase. It is a frenzy. In 2009, people were so scarred that they refused to dip a toe back into a market that was clearly going higher. Now, people turn up their nose at anything less than a 50,000 percent return, which seems to be easily obtained by buying the latest alt-coin.

The Federal Reserve’s response to all of this has been to engage in a ridiculous discussion about inflation targeting. Policy makers are still concerned about the rate of inflation being too low and are seemingly oblivious to the signs of excess speculation all around them. There was a time when back-to-back speculative bubbles had so damaged the economy and investor psyche that the thought of allowing a third one to form would have been unconscionable -- and yet, here we are.

Leave the inflation target aside for a moment, and the insanity of trying to create more inflation. The Fed’s unwritten mandate is to take away the punchbowl when the party gets out of hand. Is there really a risk of plunging the U.S. into a Japan-style deflationary depression by having positive real interest rates? I don’t think there is. The economy needs higher rates, but not because of any threat of faster inflation. The economy needs rate hikes to curb speculative excess. Boost rates 200 basis points and all this crazy stuff goes away. People might even keep cash in a bank account.