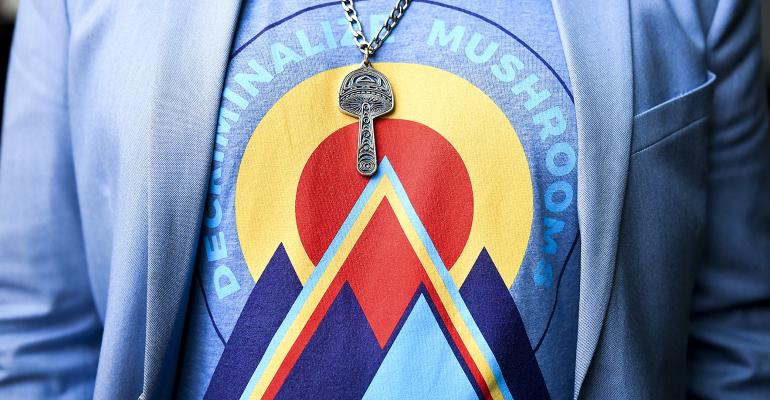 Marijuana’s legal headway in recent years has paved the way for new interest in remedies typically relegated to the black market.

(Bloomberg) -- Cannabis is only on the cusp of many investors’ comfort zones, but the family offices and high-net-worth individuals hungry for early stage, edgy investments have already moved on to psychedelics.

Marijuana’s legal headway in recent years has paved the way for new interest in remedies typically relegated to the black market. Companies that work with drugs like psilocybin, an ingredient in magic mushrooms, or Ibogaine, used in ayahuasca-style ceremonies, are proliferating, with early-stage investors predicting such substances have an even better shot than cannabis at disrupting the $70 billion market for mental health. The question now is whether such aims bear out -- and in time to catch up with all the money flowing in.

“People see this potentially as a get-rich-quick mechanism, just like you saw in the early stages of cannabis,” said Sa’ad Shah, who runs Grey House Partners GP Inc.’s Noetic Fund, which has invested in more than a dozen psychedelics companies. While Shah’s background is in asset management, he said lots of VCs in the psychedelics space have recently come from marijuana. “They feel they don’t want to have another FOMO situation here,” he said, referring to a “fear of missing out,” like they did with early-stage cannabis plays.

The overlap between the two sectors is clear. Both involve substances that are federally illegal in the U.S. and in many other countries around the world, putting off most institutional investors and leaving the playing field to high-net worth individuals and family offices.

Yet there are also huge differences. Psychedelics, which can involve intense, side-effect-plagued trips, aren’t predicted to have the widespread recreational appeal of marijuana. And with all the talk about micro-dosing as a productivity-booster or mood-hack -- which has little to do with the narrow regulatory pathways these psychedelics startups are treading -- there’s a fear the market could see a bubble just like cannabis did.

Still, the regulatory landscape is shifting fast, giving investors with a higher tolerance for risk a new potential growth area.

Peter Thiel, the Facebook and PayPal investor, and David Bronner, chief executive of Dr. Bronner’s Magic Soaps, both of whom were known names early in marijuana, are two high-profile players in the hot-but-edgy realm of hallucinogenic drugs.

Psychedelics have just recently been decriminalized in a handful of U.S. cities and one state, putting it way behind cannabis, which is now available in some form in 35 states and potentially track for federal legalization under President-Elect Joe Biden. Denver and Oakland both decriminalized psilocybin in 2019, and Washington, D.C., decriminalized mushrooms and other plant-based drugs like mescaline and ibogaine in November’s election.

Such changes don’t make the drugs legal -- just the lowest level of priority for police enforcement. Oregon took it a step further, voting in November to legalize psilocybin -- but only in a therapeutic setting. Exact rules on what that entails have yet to be worked out.

“For cannabis in North America, I think we’re a little bit late to the game. There are already a few strong cannabis fund managers,” said Bek Muslimov, a co-founding partner at London-based venture firm Leafy Tunnel.

Muslimov is building a portfolio of around 15 companies, investing only in seed and Series A rounds with a 50-50 split on psychedelic and cannabis firms. Current investments include Atai Life Sciences AG, backed by Thiel, and Synthesis, a psychedelic retreat in the Netherlands. Psilocybin mushrooms are illegal there, but a loophole means that the root of the plant -- known as a “truffle” -- can be used.

As with marijuana, there’s already a thriving black market for psychedelics that speaks to their popularity. And attitudes are changing, thanks in part to Michael Pollan’s 2018 book on micro-dosing and a designation from the Food and Drug Administration the same year that fast-tracked a psilocybin-based treatment for depression from Compass Pathways based on preliminary clinical evidence. Investors noticed. When Compass, also backed by Thiel, went public this September, its shares jumped 71% in the first day of trading.

Another similarity: Dozens of psychedelics companies have gone public just like early cannabis companies did -- in Canada using reverse takeovers, mostly of mining companies. Around 25 companies on the Canadian Stock Exchange are in the psychedelics business, according to the exchange. While such substances are federally illegal in Canada, companies can seek government authority for research, and a recent citizen’s petition has called to decriminalize so-called “entheogenic” or spiritual, plants and fungi, citing their potential for therapy and personal growth.

While cannabis is chasing widespread recreational use -- a path that hinges more on changes to the federal laws -- the narrower medical path that most psychedelics companies are taking makes investing in them more like investing in biotech, said Simeon Schnapper. His JLS Fund has invested around $10 million in 12 psychedelics companies and is currently raising another $50 million.

The long history of indigenous and black market use make it easier to predict success compared to novel drugs, he said. “Sometimes there’s a drug where indigenous forest cultures have been using it for centuries. We know these molecules can work. We just need to get them through FDA trials.”

So far, there haven’t been any high-profile investor run-ins with the law, though companies continue to warn in registration statements about the risks of being in a federally illegal industry. For example, even if a drug like psilocybin wins FDA approval for use in a certain drug, the DEA would still need to “deschedule” or “reschedule” it, removing it from Schedule 1 under the Controlled Substances Act, for it to be commercially marketed.

The long history of psychedelics also means intellectual property needs to be scrutinized. Investors in the space caution about companies that are all smoke and mirrors, and say it may take the discovery of novel molecules, synthetically derived hallucinogens or other creative business models for companies to distinguish themselves in a field dominated by natural products -- which can’t be directly patented.

Related: MindMed Surges, Putting It at Forefront of Psychedelic Euphoria

Meanwhile, hopes for medical breakthroughs are high. Whereas cannabis aims to treat things like depression, addiction, anxiety and PTSD, psychedelics investors say many substances show the promise of actually curing them by resetting the brain -- with some claiming it takes a single use. Research at universities like Johns Hopkins University, Imperial College London and King’s College London have created excitement around such prospects for a range of drugs -- like ketamine, a horse tranquilizer that’s now legally prescribed off-label at some U.S. and German clinics; MDMA, also known as Ecstasy or Molly; and 5-MEO, which is found in plants, and the Sonoran Desert toad.

“The possibilities for psychedelics to be a new medicine and replace antidepressants is 100 times greater than cannabis,” said JLS Fund’s Schnapper.

After working as a cannabis operator just before what he called the “greenrush” years, he invested a few million dollars and lost a lot of it in 2018 and 2019 when stocks deflated. He is currently only in one well-known cannabis-investment, Method Man’s Tical, because he’s decided to go otherwise all-in for psychedelics. An investment in one company gave him around 1,000 times his money in less than a year, he said.

“I’ve seen the best returns in any industry,” Schnapper said.

--With assistance from Matt Goldman.