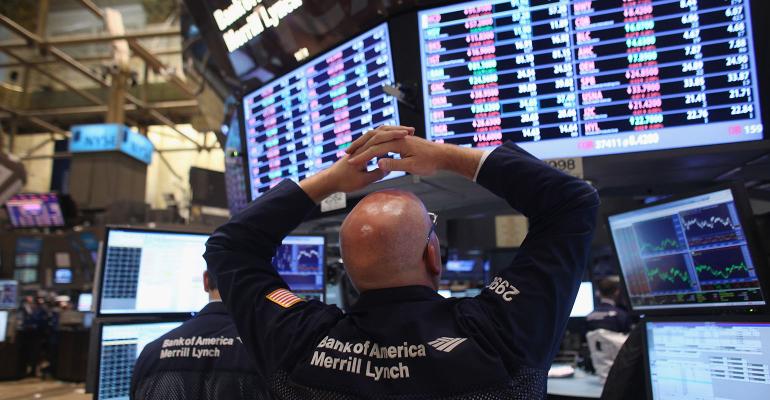 How the Next Quant Fund Crisis Will Likely Play Out

(Bloomberg Prophets) --Most everyone knows that this month marks the 10th anniversary of the start of the biggest financial crisis since the Great Depression. There was another significant event back then that gets overlooked but was still very significant.  I’m referring to the quant equity crash of August 2007.

It was dull by comparison to what else was going on at the time. It lasted three days, and markets snapped back on Day Four. Although many funds lost as much money in three days as they were supposed to lose in a bad year, there were no immediate blow-ups. Ultimately, though, about a quarter of quant equity funds quietly closed a year or more later, including the Goldman Sachs Global Alpha fund, as almost two-thirds of assets invested were withdrawn over the subsequent 18 months.

Quant funds recovered and probably now hold twice as much in assets as at their peak in July 2007.  But that is the tip of the iceberg. Mathematical-based investing methods have been adopted by many active managers and exchange-traded funds under names such as smart beta, factor or style investing. Institutional quant hedge funds have addressed the risk issues that caused 2007 losses, but the newer retail products cannot. The hedge funds in August 2007 did not have to report losses until the end of the month, and most investors would have been locked in until the end of the year.  ETFs and mutual funds both report and honor redemptions every day.

In 2007, problems began in late June when investors were spooked by credit issues.  Investors worried about leverage, and they needed money from their most liquid strategies. Quant equity qualified for both reasons. Funds reduced positions and volatility went up, causing further position reductions. More losses meant more reductions, more volatility and more losses. For reasons still not understood, the process accelerated for three days in August, hit bottom, and bounced back.

Sophisticated quant hedge funds run with hundreds of factors, many unique to the fund and providing diversification. Many newer products are based on the same few well-known factors. Moreover, the big quant funds in 2007 were run by people who invented the methods and had many years of successful experience in running them, with true-believer professional investors as clients. Many quant strategies today are run by simple algorithms, or managed by people without deep quant roots, and held by fickle investors.

Does that mean the next quant equity crash will be more severe and market-moving? Not likely. The sophisticated quant hedge funds have changed their processes with this kind of event in mind. Moreover, retail investors are unlikely to sell en masse due to general market worries. The newer products use less leverage than hedge funds and many are unlevered, meaning there is less amplification of selling pressure.

I think we're more likely to see the next crash in reverse. Instead of an investor pullback touching off an accelerating loss spiral, a hard-to-explain loss -- perhaps in a single fund -- could touch off an investor reaction against a large swath of quant funds. Quant is not an asset class, but it is often marketed that way. The crisis may look more like investor panic about money market funds in September 2008.  The one similarity is the only victims are likely to be investors in quant funds. Quant equity positions are too liquid to cause other dominoes to fall.

Of course, this may not happen. Perhaps by the time some quant fund has a disaster, investors will have grown used to holding them and will not treat all quant strategies as the same. Other types of funds have blown up without taking whole categories with them. Unfortunately, quant seems mysterious and dangerous to many people, making them quicker to fear and slower to trust mathematics versus managers with attractive stories but worse-than-random track records.

In the meantime, the solution is education -- as it is to so many problems. Quant investing is not a black box and it is not an asset class. It's just doing systematically and cheaply what all good investors try to do. If that message can get out, we could go another 10 years without a quant crash.


Aaron Brown is a former Managing Director and Head of Financial Market Research at AQR Capital Management. He is the author of "The Poker Face of Wall Street."