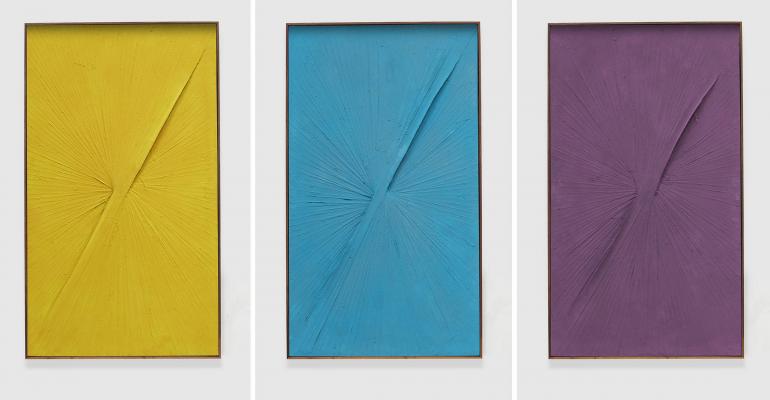 (Bloomberg) -- The difference between art and other so-called "alternative assets" is that unlike orange futures or crude oil, when you buy an artwork you often want to bring it home and look at it. This is generally considered a twofer—something that enriches your life and also appreciates in value. The flip side, though, is that while a demonic, super-sized, mechanical marionette might be interesting, it might not be what you want to wake up to every morning.

As collectors go through the many art fairs and gallery openings and auctions during this Frieze week in New York, that balance between "important" and "fun to own" is a tenuous but crucial consideration to keep in mind. Having gone through some (though certainly not all) of this week’s fairs, we’ve picked a few works that nicely straddle the divide and (we hope) will be appreciated (and appreciate) for years to come.

Fritsch, a Düsseldorf-based sculptor, is known for her slightly familiar, mildly unnerving installations and sculptures. Her work has been exhibited publicly—a giant blue rooster was put on a plinth in London’s Trafalgar Square—and has been the subject of solo exhibitions at a handful of museums, including the Tate Modern. This mouse (excuse us, Maus) was made out of of polyester resin and paint in 1998. It's reminiscent of her groundbreaking Rattenkönig (Rat King) installation at Dia New York, where 16 12-foot-tall rats were placed in a circle, their tails tied in knots. Maus is only 7.25 inches high. At this smaller scale, it’s less terrifying but still sufficiently uncanny to be interesting. Price: $12,000.

A full-sized mahogany armchair, working lamp, and nonsensical chess set, all from 2015, are on display at the Frieze booth of A Gentil Carioca, a Rio de Janeiro-based contemporary art gallery. Each piece is a perfect recreation of the furniture (and Max Ernst chess set) featured in an iconic photograph of Marcel Duchamp. The pieces, which were created by José Bento, a conceptual Brazilian artist who mainly works with wood, are a bright, clever rendering of artistic mythology in the flesh. Plus, it’s art you can actually use. Price: $45,000

Like many painters, Los Angeles-based Matthew Chambers creates many more artworks than he shows to the public. Unlike most painters, he recycles his unsuccessful canvases and turns them into these three-dimensional “ripped” paintings. On one level, it’s a nice, albeit not totally original riff on bringing the canvas literally out of the frame; on another, these works from 2016 are a subtle, meditative use of turning failure into something compelling. Price: $12,000 each

In 1971 Eleanor Antin, an American conceptual artist, put 100 army/navy boots in her car and drove for three years around California, Jack Kerouac-style, taking photos of them in various settings. She then printed each image on postcards and sent them to friends. The images are whimsical and cinematic; they anticipate, with startling prescience, Cindy Sherman’s film stills, which came just a few years later. The full set of all 51 postcards is being sold by Alden Projects alongside a work by Ray Johnson, another conceptual artist whose work was primarily executed through letters and the mail; the work in question is titled, appropriately, Untitled (Beautiful Eleanor Antin). Price: $82,000 for 51 Cards and a Ray Johnson Letter

Sonia Delaunay, a truly important abstract artist whose work has been long-overlooked (her husband, Robert, got most of the attention), created art in a variety of media, the most striking of which was tapestry. This work, which dates to 1970 and is woven out of wool, is a large-scale example of what made her work so compelling. Bold, dynamic, and just a little bit weird, the piece is a welcome alternative to the empty, contemporary abstract paintings that have crowded art fairs for the past few years. Price: $110,000

If you’re going to buy art for your home, why not consider buying something you can use? Or at least pretend you might use it. This chair, which was made in 1980 out of formica, painted wood, and rubberized horsehair, is offered by Mireille Mosler as a unique, irreplaceable work. Artschwager, who skipped between pop and minimalist art, devoted himself to furniture design for only a relatively short period. Price: $95,000