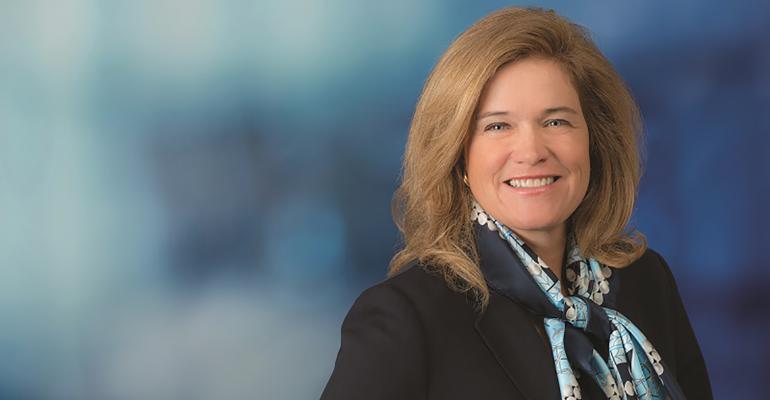 (Bloomberg) -- Franklin Templeton’s Jenny Johnson is confronting the kind of problem her grandfather encountered decades ago.

With companies now taking longer to go public, Johnson wants to bring more private investment opportunities to everyday customers. The chief executive officer of the $1.4 trillion money-management giant sees the “democratization of private assets” as analogous to her grandfather offering mutual funds to retail investors at a time when it was hard to diversify.

“I describe it as a bit like running with scissors,” Johnson said in an episode of “Bloomberg Wealth with David Rubenstein” on Bloomberg Television.

“Scissors are a great tool if used appropriately,” she said. “We’re focused on trying to responsibly bring it to the average investor.”

Franklin Templeton has been building its alternatives offerings through recent deals. In May, it announced plans to buy Alcentra, a European credit and debt subsidiary of Bank of New York Mellon Corp. The acquisition came after its $1.75 billion purchase of Lexington Partners, and of private credit manager Benefit Street Partners.

Franklin Templeton also offers cryptocurrency investments, though Johnson calls Bitcoin “the greatest distraction from the greatest disruption I see happening to financial services today.” The real game changer is blockchain, she said, and “its impact on both our industry as well as other industries is pretty dramatic.”

Started in New York in 1947 by Rupert H. Johnson, the firm was named after US founding father Benjamin Franklin, who advocated frugality when it came to saving and investing. The company went public in 1971, but the family retains control of more than 40% of its outstanding shares. Now based in San Mateo, California, the firm has more than 10,000 employees and offices in 35 countries.

Jenny Johnson, the daughter of Rupert’s son Charles, spent more than three decades at the company before taking over the top job in 2019. She succeeded her brother, Gregory, 61, who stepped down to oversee the San Francisco Giants but remains chairman of the board. Soon after she became CEO, Franklin Templeton completed a $4.5 billion buyout of investment-management firm Legg Mason, strengthening its presence in the Baltimore and Washington areas.

Growing up in New Jersey and California, she said conversations around the dinner table with her parents and six siblings usually centered around science rather than investing and finance, as her mom was a psychiatrist. After studying economics and physical education at the University of California at Davis, Johnson toyed with the idea of being a basketball coach before joining the trainee program at Drexel Burnham Lambert in New York.

“I always aspired to be in the business,” she said.

Johnson also spoke about how exchange-traded funds are changing the money-management business, the toughest part of her job and where she’d put $100,000 today. The interview has been edited and condensed.

How have index funds and ETFs affected your business?

I look at ETFs as a vehicle to deliver your investment capabilities. Our expertise is people managing money. We have a certain mandate and a risk return. We’re agnostic to the vehicle which we deliver it in.

As for the passive versus active question, we’ve just come off a decade where, essentially, interest rates were zero. You could borrow money for nothing. You didn’t get paid to be in fixed income. That pushed everybody into the equity markets or private assets. In that environment, passive funds often outperform in a momentum market.

There are half the number of public companies than there were in 2000, and there are five times the number of private equity-backed companies. So the return that used to be captured in the public market is now captured in private markets. The problem is you’re really tied up for a long time when you invest in a private equity fund. So we’re trying to figure out a way to solve the same problem my grandfather was trying to solve, which is: How do you bring those returns responsibly?

How are recession worries affecting the money-management business?

Uncertainty always makes people hesitate when they’re investing. The trend we’ve seen is retail investors have pulled money out. And you’re seeing the institutional investors being much I think more cautious.

We have 18 independent investment teams. Our macro-economists have differing views on whether there’ll be a recession, if we’re already in a recession or the depth of the recession.

Is it easier to be a privately owned money-management company or publicly traded?

We are in a unique position in that the founders still control over 40% of the firm. We get the benefit of having a certain amount of control that allows us to make long-term decisions.

I remember when the dot-com bubble blew up. A lot of US managers were starting to expand internationally,  and immediately everybody retreated. My father was the CEO at the time, and he said, “No, no, no. We’re going to keep going. That’s going to be where the future is.”

Today, we’re a dominant global asset manager, with probably more coverage than anyone else. That’s because we were able to make that long-term decision. On the other hand, you still have the discipline of having to look at quarterly earnings. It forces you to make tougher decisions than when you’re a private company.

When you were growing up, did your family say, “You’re going to be the CEO someday of a money-management company that we own?“

I always aspired to be in the business, but there was never any pressure. I loved what I did. I ran technology. I ran the operations. I came up on that side of the business. After 15 years of running the company, my brother was ready to do something different. He had an opportunity to be the control person of a Major League Baseball team. I mean, who wouldn’t want to do that? So, it was time.

There was a period of time in college where I thought maybe I would become a coach, because I love sports. But then I decided that I could probably volunteer as a coach. My passion was basketball — but I’m a little short for it.

How do you make certain you have good standards on diversity, equity and inclusion?

One of the first things I did as CEO was hire a chief diversity, equity and inclusion officer who reports directly to me. I believe very strongly that you have to have diversity in your investment teams to see the opportunities. Less than 2% of venture capital money goes to women entrepreneurs, and yet they say that they have twice the return. We were one of the first to back a company called Rent the Runway in our venture group. More than half of female entrepreneurs say they were turned down by venture capitalists because they didn’t understand their business model. So it’s a missed opportunity.

What is the most common mistake investors make?

They sell low and buy high. That’s why I feel people should use a financial adviser, because the financial adviser will deal with the emotional difficulty of a market drop. They’ll say, “Don’t worry. We’re in this for the long run. Just stay in.”

What’s the best investment advice you ever received?

What’s the greatest challenge of running a company like this?

My dad has a saying: “You either are a tough boss, or you work for one.” You have tough decisions. You have to terminate people or move them into a different role. Sometimes, a job has grown beyond somebody’s capabilities. Sometimes you have to make a decision of where you’re outsourcing. People decisions are the tough part of the job.

If somebody asked how they should invest $100,000, what would you tell them?

The Franklin Income Fund is an outstanding investment. It's very diversified, and it's managed, with allocations shifting between equity, fixed income and a little private.

Should I be putting money in a mutual fund, an equity fund or a fixed-income fund?

The Fed is going to continue to raise rates, so that’s going to make any longer-term fixed income investment a bit of a challenge for the short run.

Do you offer cryptocurrency investments or do you not recommend that?

We do offer it. I always say that Bitcoin is the greatest distraction from the greatest disruption I see happening to financial services today. Will governments allow Bitcoin to become a dominant currency? Probably not. It’s more like religion, and people are going to debate it. But blockchain is a technology, and its impact on both our industry as well as other industries is pretty dramatic.

We’re going to be able to drive out a lot of costs because you’re going to be more efficient with the technology that has a smart contract. It’s also more secure from a cyber standpoint because of the distributed nature of it.