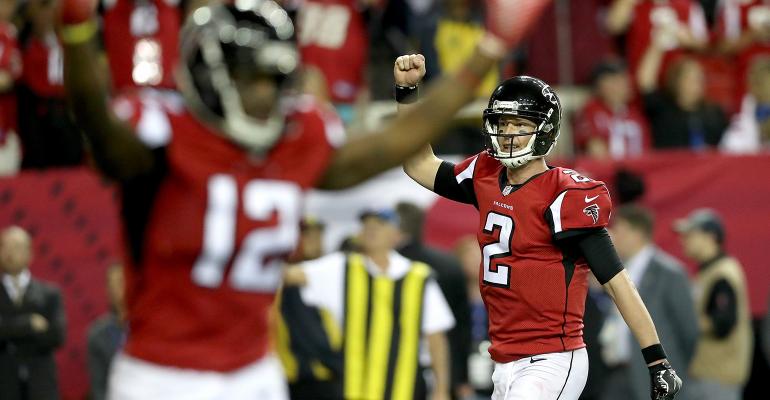 The Falcons Are the Undervalued Bet

Why you should bet on the Atlanta Falcons, how Donald Trump saved stock picking and Apex hires Ron Fiske away from Envestnet.

While the New England Patriots are favored to win this year’s Super Bowl by 4 points, the Atlanta Falcons are the undervalued bet—likely to win or at least cover the point spread, according to an analysis by Analytic Investors, a quantitative asset management firm. The firm’s annual NFL Alphas study aims to predict the Super Bowl outcome by looking at the investment return of each NFL team relative to sports wagering market expectations throughout its regular season schedule. In this year’s study, the Patriots are ranked third, with an alpha of 40.5 percent, while the Falcons are ranked seventh, with an alpha of 29.2 percent; the underdog pays out more. This year, the firm expects the lower-Alpha Falcons will either win outright or lose by less than 3 points. Using this analysis, Analytic Investors has correctly predicted 10 of the last 13 Super Bowl outcomes.

Is Trump Good for Asset Managers? Active management will thrive under the Trump administration, according to Dan Loeb, the founder and chief executive of Third Point LLC, a New York hedge fund worth over $10 billion. In his fourth-quarter investor letter, Loeb writes that the Trump administration has saved stock-picking, which was "considered to be on its deathbed," largely due to his promises of tax cuts, slashed regulation and ramped-up government spending. Loeb writes, "Winners and losers will be impacted by policies created by the Trump administration's actions and the world's reactions to them." Infrastructure, fossil fuels and financials are particular areas money managers are licking their chops over. However, investors must navigate the sometimes unpredictable and flippant nature of the new commander-in-chief and deal with resulting market volatility, which can be a double-edged sword for active managers. Apex Clearing, the custody and clearing firm that work with digital advisors like Betterment and Wealthfront, hired Ron Fiske away from Envestnet to serve as Apex’s new head of retail. Before serving as the managing director at Envestnet, Fiske held leadership roles at Fidelity Investments and Pershing. Apex recently added rebalancing technology via Smartleaf to its offer. William Capuzzi, Apex’s CEO, said in a statement that by offering their client firms the most sophisticated technology, they’ll become the most profitable and most consumer-friendly. Fiske added, “from a technology standpoint, Apex is way ahead of the curve as the operations of the advisor community inevitably become more digitally-focused.”