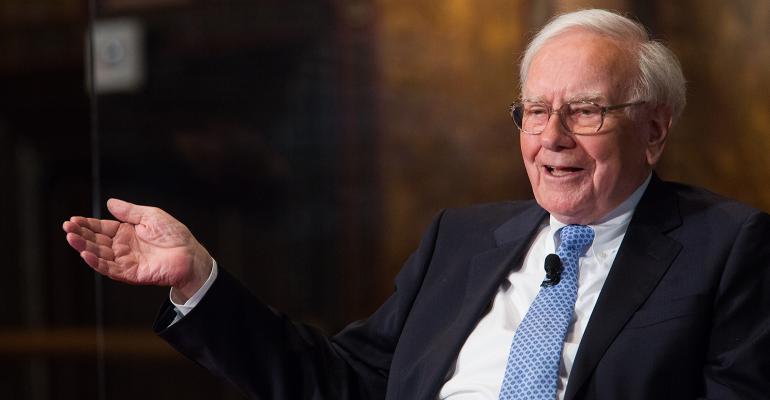 Warren Buffett again argued that people would be better off sticking their money in an index fund than paying the high fees charged by hedge funds.

By Noah Buhayar and Jordyn Holman

At the annual meeting of his Berkshire Hathaway Inc. he again pressed the argument that, in aggregate, investment professionals aren’t worth their fees -- and that people would be better off sticking their money in a low-cost index fund. He also challenged how hedge fund managers are paid.

"If you go to a dentist, if you hire a plumber, in all the professions, there is value added by the professionals as a group compared to doing it yourself or just randomly picking laymen," Buffett, 86, said. "In the investment world it isn’t true. The active group, the people that are professionals in aggregate, are not, cannot, do better than the aggregate of the people who just sit tight."

Vice Chairman Charles Munger, 93, said "it’s even worse than that" because some hedge fund managers with a long career in the industry -- known for charging 2 percent management fees and taking 20 percent of profits -- do well, attract money and then lose it.

"The investing world is just a morass of wrong incentives, crazy reporting and, I’d say, a fair amount of delusion," Munger said.

Buffett also challenged, as he has in previous shareholder meetings, the 2-and-20 compensation model for hedge fund managers.

"If you even have a billion dollar fund and get two percent of it, for terrible performance, that’s $20 million," Buffett said. "In any other field, it would just blow your mind."

By comparison, the two stock-pickers at Berkshire, Ted Weschler and Todd Combs, manage about $20 billion between them and get paid $1 million a year in salary, plus bonuses based on the amount by which they beat the S&P 500 Index.

The average hedge fund gained about 2 percent this year through April compared with the  rise of about 6.5 percent in the S&P 500 Index.

Buffett said the $3 trillion hedge fund industry is "such a big game" that people are able to make "huge sums of money, far beyond what they’re going to make in medicine" or other professions.

"The huge money is in selling people the idea that you can do something magical for them," Buffett said.

While there are some money managers who will do better than average in picking investments over time, most won’t, he said.

Buffett has repeatedly challenged the value of hedge fund managers at Berkshire’s annual shareholder meeting and in his letter to investors. He’s in his final year of a wager with Ted Seides, managing partner for Hidden Brook Investments LLC, on whether an investor putting money in a low-cost fund tracking the S&P 500 index of stocks would see more gains than the returns of five funds of hedge funds over a decade. Buffett is winning.

At the start of the annual meeting Saturday, Buffett called out the attendance of Vanguard Group founder Jack Bogle in the audience. Buffett praised Bogle for helping millions of Americans save on fees through his development of index funds for retail investors. Buffett has said most of the money he’s leaving for his wife after his death will be invested in a Vanguard S&P 500 index.

Buffett started his career as a stock picker and much of the success of Berkshire has come from the company’s investments in U.S. equities. It’s the largest shareholder in businesses including Wells Fargo & Co., Delta Air Lines Inc. and Coca-Cola Co.