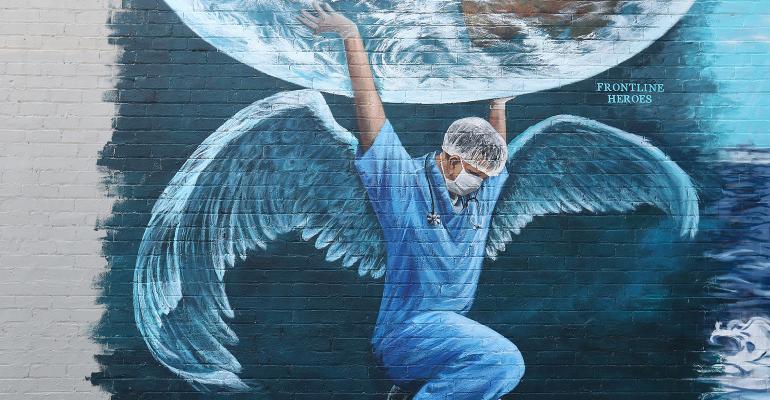 The Bubonic Plague’s Lessons for a Post-Coronavirus Society

Wealth management firms need to be prepared to offer investment solutions that are compelling in returns and yield, while also laddering up to the promise of building a better world.

“Neither physicians nor medicines were effective. ... There was such a fear that no one seemed to know what to do,” according to 14th-century Florentine statesman Baldassarre Bonaiuti about the bubonic plague, rapidly spreading across Europe at that time.

With America’s coronavirus death count well past 175,000 and as federal, state and local officials struggle in their efforts to stem the tide, this statement might easily describe American public sentiment about the ongoing pandemic.

For financial advisors, COVID-19 and the radical changes it has wrought across the country have forced a significant shift in client interaction, away from future planning and more toward hand-holding, in efforts to dissuade panic selling and other counterproductive behaviors.

Of course, the toll exacted by the bubonic plague far outweighs even the most pessimistic projections from public health experts about potential coronavirus fatalities. For as bad as COVID-19 has been for America, there continues to be no comparison relative to the impact of the Black Death on Europe, where as many as 25% of the population succumbed to it.

But while popular history tends to focus on statistics and death tolls, we should recognize that pandemics can fundamentally reshape values and behaviors on a mass scale, with profound and unforeseen socioeconomic transformations.

This, in turn, presents financial advisors with a clear set of potential challenges and opportunities when it comes to attracting and engaging with clients in a post-pandemic landscape.

Many historians agree that one of the long-term shifts sparked by the bubonic plague was the Protestant Reformation, which broke the Catholic Church’s near-monopoly on organized religion in Western Europe. Partially due to its seeming inability to counteract the plague, the Catholic Church’s authority on a wide range of issues became more actively challenged, with Protestant denominations attracting a surge of adherents questioning the status quo.

In a similar, if less extreme vein, the current pandemic has intensified skepticism from many segments of our society on everything from the public sector’s role in our economy, to race relations, to climate change and more.

We have yet to see where these changing mindsets will land once the coronavirus pandemic is behind us, but advisors are increasingly being asked by clients about purpose-specific or mission-driven investing that carries a quantifiably measurable impact on issues that are important to them.

Green investing and opportunity zones, perhaps not surprisingly, have been receiving accelerated interest as ways for investors to vote with their wallets when it comes to, respectively, climate change and community development.

A Fresh Priority on Doing Well While Doing Good?

Another area of intensified change triggered by the devastation of the Black Death was the reprioritization of the value of certain behaviors over others. One instance of this can be found in the rapidly changing power dynamic between the landed nobility and commoners.

Dramatic population decline that reshaped the supply and demand calculus for labor, while an important consideration, reflected the growing belief that ordinary people should have much more of a say in their own destinies. For many, it was no longer acceptable to prioritize unquestioning deference to the social hierarchy in order to reap greater rewards in the afterlife.

Similarly, the coronavirus pandemic has been crystallizing a trend that has been slowly underway for the past decade in particular—the idea that value creation with investing should make sense in terms of both the economics and the broader positive impact for our broader community.

With an increasing sense of activism across the investment community, driven by the notion that unquestioningly retaining the status quo is unsustainable for future generations, trends such as the rise of climate change activism and green impact investing are not only here to stay, they are also positioned to grow in popularity.

The coronavirus pandemic has not yet fully run its course in America and other parts of the world, and it is clear that the continued death tolls represent an enormous human tragedy.

Yet even as financial advisors continue to perform the vital work of keeping clients focused on the big picture and avoiding emotionally charged financial choices with harmful repercussions, they would do well to keep in mind that the post-pandemic environment could witness the acceleration of new investor sentiments.

As such, wealth management firms and their financial advisors need to be prepared to offer investment solutions that are compelling in returns and yield, while also laddering up to the promise of building a better world.