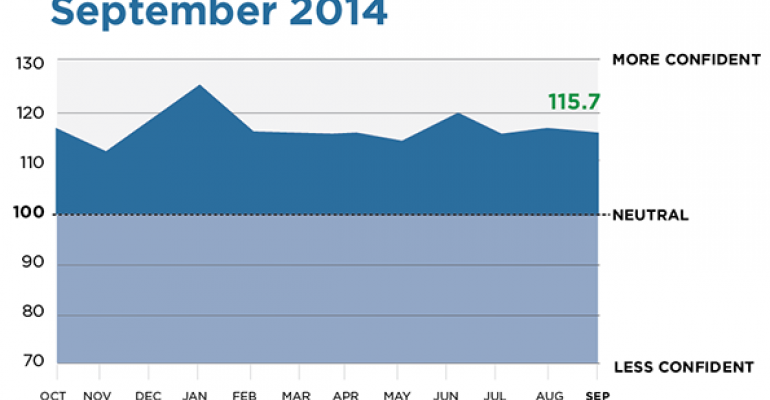 The overall WealthManagement.com Advisor Confidence Index dropped 1 percent in September, while the component of the index that gauges sentiment in the direction of the stock market fell 3.5 percent. That continues a slow erosion of advisor optimism in the markets and the economy that, with a few exceptions, has been on a downward path since the beginning of the year.

The index, calculated via a monthly Wealthmanagement.com poll of some 150 financial advisors who have agreed to participate in the panel, fell to 115.69.

While anything above 100 signifies overall optimism, the index has fallen over seven percent from a high of 123.02 at the beginning of the year. The bulk of the falloff in September was concentrated around advisor’s increasingly negative view of the stock market, which fell over 2 percent during the time of the survey.

Geopolitical uncertainty, the end of quantitative easing and mid-term elections on the horizon all were cited as reasons for volatility in equities, with many advisors suggesting the market is due for a correction.

“The market is pretty fully valued and reflect much, if not all, of the economic improvement. Risk appears to be to the downside,” said Matthew Petersen of the GM Advisory Group.

“The expected correction still has not arrived,” said Edward Kohlhepp Sr. of Kohlhepp Investment Advisors. “The train is late to the station, but it still might arrive. There are several events that could trigger the correction this fall including the ending of QE, the fall elections, and any one of a number of geopolitical events.”

“Expect the market to take a breather, but end the year where it is now,” said Robert Cochran of PDS Planning. The survey was fielded toward the beginning of September, when the S&P 500 was bouncing within 20 points of 2,000.

The ACI is calculated by asking advisors their relative optimism in four areas: The current state of the economy, the economy in six months and in 12 months, and then their optimism that the short-term (six month) direction of the stock market will be higher. Almost all of the drop in September’s ACI can be attributed to the 3.5 percent drop in that last question. The other components of the ACI remained flat compared to the previous month.

While many advisors predicted the recent wobble in the equity markets, some pointed with surprise to the resilience of Treasuries. “Relatively strong economic trends help underpin the US stock market, even if it occasionally gets a little ahead of itself. The big surprise in 2014 markets is the relative strength of US Treasuries. Pundits calling for a rapid rise in interest rates this year clearly were caught flat-footed,” said Eve Kaplan of Kaplan Financial Advisors.