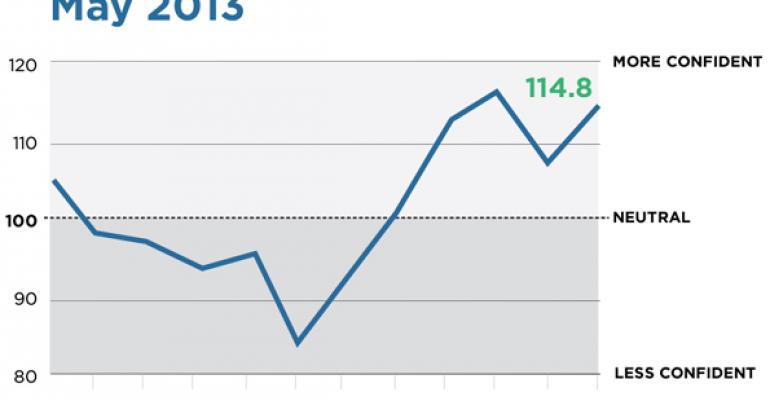 Advisors More Optimistic in May

After registering pessimism in April, Financial advisors were slightly more inclined to think positively about the economy and the markets in May, according to WealthManagement.com’s Advisor Confidence Index.

New York, NY—June 1, 2013 The WealthManagement.com Advisor Confidence Index (ACI), a benchmark of financial advisors’ views on the U.S. economy and the stock market, reversed course and rose 5.6 percent during the month of May to 114.8.

The upward tick in confidence comes a month after the index fell almost 6.8 percent to its lowest point since the start of the year. Advisors then said they believed that stock prices were rising too far too fast, and that the underlying economic recovery was still too fragile to support record-high valuations.

The most recent uptick in optimism suggests advisors may be capitulating to the bull market and perceive that the economic foundation of the recovery is getting stronger. Many still suggest that the markets are being supported more by government stimulus than a strong economy.

“For 2013, it has been buy the dip as the market has grinded higher,” says Kenny Landgraf of Kenjol Capital Management. “This probably the most hated bull-market rally. The bears and their cash positions earning zero are getting pulled off the sidelines. Central banks will continue to provide liquidity for the market and prevent companies from running out of cash. Interest rate yields are terrible. As bond investments mature, the bond investors are slowly forced to take more risk to replace the same yield as their maturing debt. We expect a sideways market and then we will hit new highs in the fall again.”

All four indicators that compose the Advisor Confidence Index moved upward in May. The component that tracks optimism over the current state of the economy and the markets rose by seven percent each. That was tempered a bit by advisors’ outlook for the economy in mid-2014, where optimism grew by only 3.4 percent.

Still, several advisors suggested the improved picture was in fact due to the underlying economy getting stronger. Housing and unemployment numbers seem to be getting better and that is fueling more aggressive market positions.

“This ‘head-scratching’ rally is no longer a mystery,” said Jonathan Foster of Angeles Wealth Management. “The Federal deficit is vaporizing, and even California is now projecting a 2014 surplus. This is still the rally everyone loves to hate, but soon, even ‘recalcitrant retail’ may be rushing in to catch up." 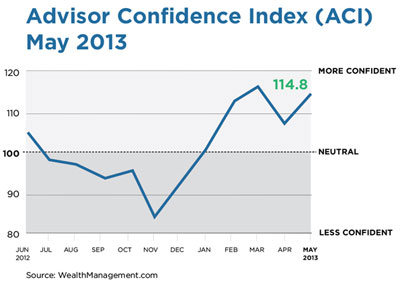 The Advisor Confidence Index is a benchmark that gauges advisors’ views on the economy. The ACI captures the views of a panel of 130 financial advisors, all of whom agreed to respond to the survey. The survey asks four questions – an advisor’s view on the economy, the economy in six months, the economy in twelve months and the stock market – on a scale from most pessimistic to most optimistic. The cumulative average is the

As the digital resource of REP. and Trusts & Estates, WealthManagement.com provides everything wealth professionals need to know to stay knowledgeable about the industry, build stronger relationships, improve their practice, and grow their business—all from one site. It boasts more than 60 editorial contributors who provide content for the more than 645,000 members of our wealth management community.

For millions of business owners and decision-makers, Penton makes the difference every day. We engage our professional users by providing actionable ideas and insights, data and workflow tools, community and networking, both in person and virtually, all with deep relevance to their specific industries. We then activate this engagement by connecting users with tens of thousands of targeted providers of products and services to help drive business growth. Learn more about our company at www.penton.com.