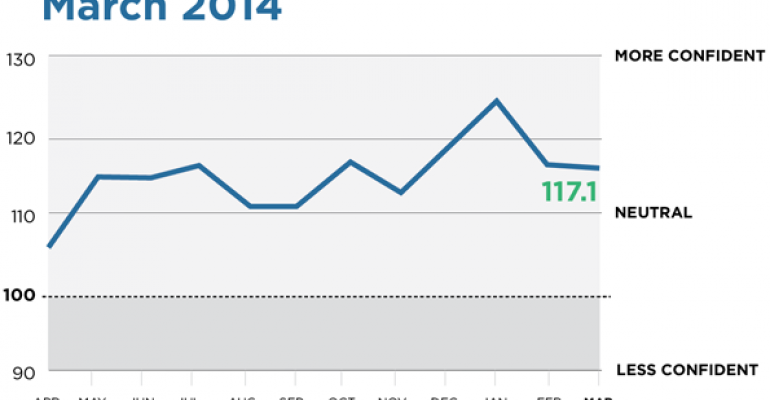 Financial advisors optimism in the economy and the markets fell only slightly during March, according to Wealthmanagement.com’s Advisor Confidence Index, but still remains in positive territory.

The Wealthmanagement.com ACI is a monthly poll of roughly 300 financial advisors who’ve agreed to answer four questions on both the current and future state of the economy as well as the stock market.

Their overall level of confidence dropped a mere .78 percent from the end of February, but did bring the index to its lowest level so far this year. Still, the overall reading shows a higher level of optimism in the economy than advisors felt one year ago. Leading the month's decline was advisor’s waning optimism in the near-term future of the stock market; that indicator fell 1.5 percent. Many advisors fear the bullrun in equities is coming to an end.

“Markets are overdue for a steep correction,” says Roger Willroth of Marss Wealth Management. “The higher we go the bigger the correction. There is way too much in equities relying on leverage.”

“I believe that the market has risen too fast and is poised for a pull back or correction. There are many headwinds including further Eurozone issues, fears over the Korea incident, Israel and Iran questions, sequestration and debt here in the U.S. Any of these, or others, could cause a pull back,” agreed Edward Kohlhepp of Kohlhepp Investment Advisors.

“Stocks are ahead of the economy,” said Bud Abbott of Family Endowment Partners.

Some advisors were more sanguine about the market, and see opportunities.  “Investors often can’t see the forest for the trees,” says Jon Foster, the president of Angeles Wealth Management. “Recent political tensions in Ukraine have created a buying opportunity for stocks and a selling mandate for bonds."

Overall, advisors expect downdrafts in equity markets while remaining relatively optimistic about the state of U.S. corporate earnings and the underlying economy. David Edwards of Heron Financial Group says he expects volatility, but not a full-tilt correction, defined by many as a fall in equity prices of ten percent or more. “$246 billion moved into US Stock and Bond mutual funds in Q1 2013, propping up stock prices even when the earnings fundamentals don't look so great,” Heron said. “We are ‘anxiously optimistic.’ We think economic activity in the US and worldwide will build as the year goes on, so we believe stock prices will end this year even higher, even with a five to seven-percent correction along the way.”

Advisors outlook on the current state of the economy fell one percent, adding to last month’s steeper pullback, supported by worries over the end of quantititaive easing and political quagmire in Washington. “I think the economy is running on the fumes of QE and is about to nosedive,” says Edward Wilson of Stratos Wealth Management. 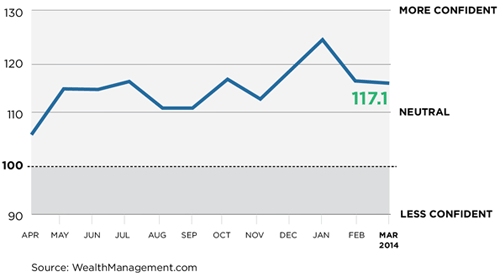 “The U.S. economy and related stock markets have experienced significant upside momentum over the last few years with only mild and short lived sell-offs. Sooner or later momentum will need to be confirmed via increased earnings outlooks and employment trends. At this point, I am not as bullish as I was over the last few years. A 'pause' is probably well over due,” says Kevin Stockton of Horter Investment Management.

Some advisors are keeping the faith. “Markets are not as bad and the media wants us to believe,” says Nicholas Dostal, an advisor with Securities America.

“Unemployment is under 7% and house sales are still moving up. Will it be a repeat of 2013 - no way, but it will still be a positive year and no reason to feel down and out.”