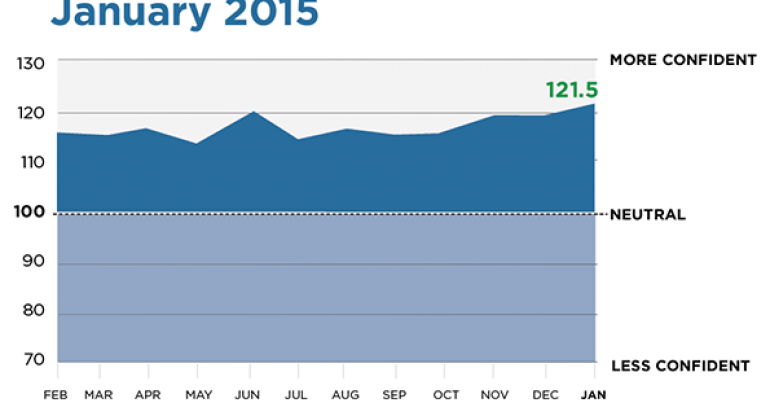 But they are less sure about the future direction of the stock market, according to Wealthmanagement.com’s monthly Advisor Confidence Index.

Financial advisors began the year more optimistic in the health of the economy than they had been for all of 2014.

The ACI is a monthly poll of some 150 financial advisors who have agreed to answer a series of four questions every month gauging their confidence the health of the economy and the markets. Looking closer at the components of the index, confidence in the current state of the economy rose 3.2 percent, while their optimism over the future direction of the stock market was unchanged.

Many advisors saw the fall in energy prices as a boost to the economy in the form of lower gas prices and higher corporate profit margins.

“Despite a sluggish global economic forecast in 2015, I look forward to a positive outlook of the over U.S. economy and the stock market for the next 12 years,” said James R. Veal of JRV Wealth Management.

“Volatility is definitely picking up. There is no sign in sight of curtailing oil supply to prop up prices. Low oil prices may bring Iran and Russia to their knees. It would be good if Americans can use some of their gas stand savings to boost insufficient retirement savings,” said Eve Kaplan of Kaplan Financial Advisors.

Yet many expressed less confidence in the stock market.

“The bull market for U.S. large caps is now getting a little long in the tooth. I'm concerned that fourth quarter and full calendar year earnings may disappoint,” said Mitchell Freedman of MFAC Financial Advisors.

“Far too many analysts and advisors are bullish toward the U.S. stock market, so I am expecting a decline of about 10% for the S&P 500 and perhaps more,” said Steven Jon Kaplan of True Contrarian Investments.

“The dividend yield on the S&P is below two percent. Valuations are on the high end of averages. U.S. domestic equities and bonds can be expected to return below average returns. Alternative asset classes such as emerging markets debt and equity, as well as managed futures, look to offer higher real returns than domestic debt or equity,” Arthur Doglione of Alpha Fiduciary.