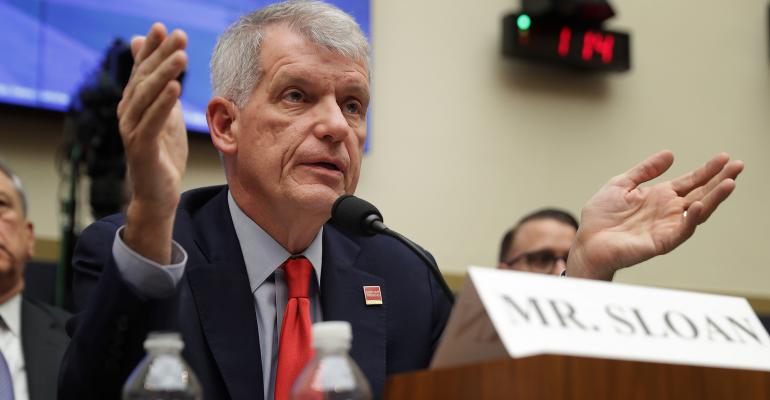 Tim Sloan would not directly say whether he personally has a fiduciary duty to the bank’s clients.

The House of Representatives’ Committee on Financial Services grilled Wells Fargo President and CEO Tim Sloan on Tuesday over the bank’s scandals, with Chairwoman Maxine Waters calling it a “recidivist financial institution that creates widespread harm with a broad range of offenses.”

Sloan was asked few direct questions about the wealth management business of the bank. Lawmakers instead focused on the consumer scandals of the past few years. He was, however, questioned by two separate committee members on whether he considers himself a fiduciary to the bank's clients.

Scott Randall Tipton (R-Colo.) first touched on the fiduciary question. “I have a responsibility to serve our customers according to the rules and regulations of this country and to provide them with the best service and advice that we can. I take responsibility for that as CEO,” said Sloan.

“Fiduciary is a legal term,” he said. “In certain businesses there is a fiduciary requirement: for example, in some of our wealth businesses and Wells Fargo financial advisors' business. In other businesses, there’s not a fiduciary standard, and in those businesses, we use a standard of doing the right thing for our customers in making sure we’re providing them with the right services and products.”

The committee’s discussion, which lasted about four hours, touched little on the firm’s wealth management business, although the hearing’s memorandum outlined the division’s abuses, including Wells Fargo Advisors settling securities fraud charges with the SEC in June and investigations into erroneous fee calculations within the wealth business. Some committee members also mentioned recent SEC charges related to the firm’s selling of high-priced mutual fund share classes.

Zeldin questioned Sloan about a recent New York Times article that quoted several employees concerned about the persistence of the sales-driven mentality in the firm’s culture. Specifically, he asked about a former Wells Fargo advisor mentioned in the article, Melissa Kinnard, who reportedly quit Wells Fargo after the firm pressured her to steer clients toward investments that would generate recurring fees for the bank, even when it was not in the client's best interest. After she quit, according to the Times, the bank sent her clients a letter saying she was joining a team with another Wells Fargo employee, and that she had personally endorsed that employee to handle the client accounts. Kinnard said the move was meant to keep her clients at the bank after she left, and the firm ignored her appeal to correct the record. The bank said the notice was sent in error and apologized, according to the Times.

“Is that true?” Zeldin asked Sloan.

Sloan said he didn’t know Kinnard and was not familiar with that situation. He added that there may have been similar letters, but he was not aware of any.

Sloan said that the firm had 14 open consent decrees with regulators but did not get into specifics about them.

He outlined the changes he has put in place since he took control of the firm, including refreshing the board, separating the roles of chairman and CEO, and centralizing such functions as risk, finance, human resources, compliance and technology. The leadership team has also changed, as have the incentives across the company and oversight of those incentives, he said. The firm has also changed the way it communicates with team members, making it easier for them to report customer abuse.

“I can assure you that our team that works with our clients in Well Fargo Advisors and any of our wealth management or retail banking businesses that provides investment products works very hard to follow the rules and regulations that they’re supposed to follow.”