How This Survey Was Conducted: Between April 16-30, 2015, WealthManagement.com emailed invitations to participate in an online survey to print and web subscribers and advisors in the Meridian-IQ database across all advisor channels. By April 30, a total of 944 responses were received (Wirehouse/national firm/super-regionals: 250; Regional brokerage firms: 58; Independent b/d: 187; RIA not affiliated with a b/d: 121; RIA affiliated with a b/d: 112; Bank brokerage: 97; Bank trust or private client department: 50; All other: 29). Advisors were asked over 30 questions on their current compensation payout, structure and satisfaction level, as well as how those factors have changed over the past year.

Moving from a commission-based business to one based on fees, advocates argue, removes conflicts and puts advisors on the same side of the table as their clients.

It also pays better. A lot. According to WealthManagement.com’s annual compensation survey, even at the wirehouses, advisors whose business mix leans more toward fees make almost twice those who still lean heavily toward commissions.

“You’re not even trading off compensation for stability,” says Gary Shub, a partner in the financial services practice of The Boston Consulting Group. “A fee-based business offers a steady stream of recurring revenue, and the compensation level ends up being higher. We still talk about fee-based as a trend, but the reality is it’s certainly more than 50 percent of the revenue of the business.” 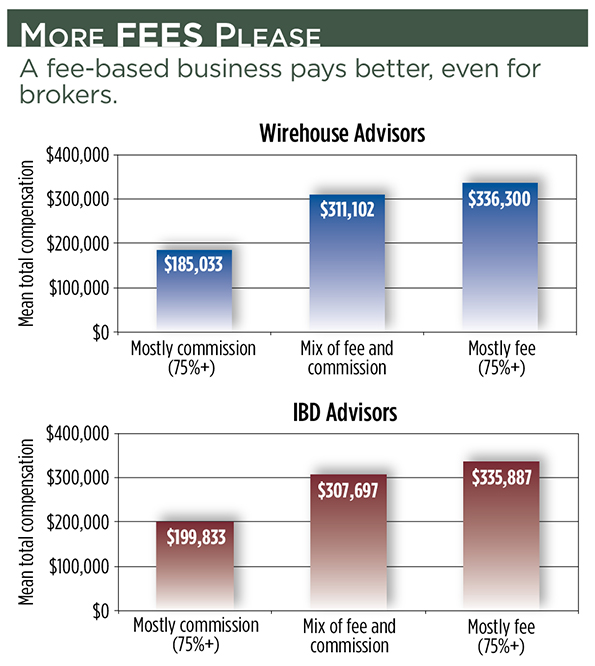 The Shift to Fees

Five years ago, fees accounted for less than half of all advisors’ revenue. But last year, advisors derived about
63 percent of their revenue from fee-based business and about 37 percent from commissions, according to the 2015 survey in which almost 950 advisors from all channels participated in April.

Among wirehouse and independent broker/dealers, advisors reported generating, on average, about 60 percent of their revenue from fee-based businesses. 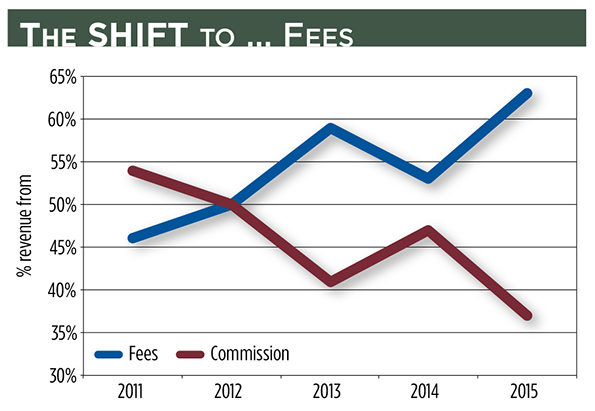 Overall, financial advisors saw their compensation grow by 12 percent to an average of $262,600 last year, according to the survey. Total compensation was up from the previous year for more than seven out of 10 advisors; almost a third said it was up by more than 20 percent.

Hybrid advisors working at an independent registered investment advisory firm affiliated with a broker/dealer took home the biggest paychecks in 2014—about $314,300 on average, according to the survey results. Wirehouse advisors came in second with an average $295,800 in total compensation reported, followed by advisors at IBDs with $283,900.

“Over the last several years, we’ve seen very little growth in the number of advisors. But if you look beneath the surface, the overall quality of the advisors has risen,” says Dan Inveen, principal and director of research at FA Insight. “(Fee-based business) is a more complex type of business and it’s not an easy transition.”

But for those who are capable of it, the benefits are tangible.

“Who is actually successfully working to increase assets and not just riding the wave? This is a troubling trend,” says Matt Lynch, founder of the Ohio-based consulting firm Strategy & Resources.

While market impact was likely the dominant driver of the 15 percent AUM growth, BCG’s Shub says fee-based advisors seem to be better at consolidating assets.

“They’re not just winning new clients into the fee-based model, but then over time (they) are able to attract the clients’ assets that may have been held elsewhere,” he says.

Being a Fiduciary Pays Off

According to the survey, advisors across all channels increased the number of clients they serve by 8 percent; pure RIAs (those not affiliated with a b/d) grew the client base 10 percent, and hybrid advisors by 9 percent. 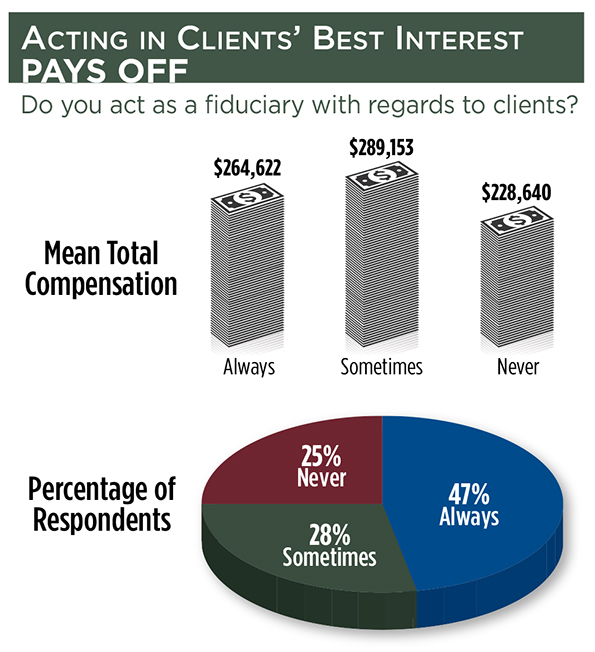 Advisors are optimistic the trend will continue, anticipating they will grow their total take-home pay by another 12 percent in the upcoming year. “If you’re an employee-based advisor, the outlook looks pretty good because all the signs point toward continued healthy growth in the rate of compensation,” Inveen says.

But Lynch questions how optimistic advisors should really be. “Everyone thinks their compensation will grow about the same year over year, but I wonder what percentage of that growth is tied to new business, compared to those who are expecting to just ride the wave of market action,” Lynch notes.

Firm owners may also have cause for concern. “If you’re a firm owner, however, you should probably be a little concerned about how you’re going to source labor and manage higher costs related to compensation of your staff,” Inveen cautions. While the market demand for advice continues to grow, the supply of advisors has not.

Next: Can the Hourly FA Survive?